Mother Nature is now bringing it to western Japan.  I'm now in Myokokogen, one of the snowiest locations in central Honsu and home to several (mostly not connected ski areas).

From a snowfall perspective, the place is a winter wonderland and I've seen published, credible reports of an average annual snowall of 13 meters (511 inches), comparable to Alta.  Although I'm not sure what location and elevation that is for (snowfall increases from left to right and with altitude in the photo above, maximizing near Seki Onsen ski resort, which is closest to the Sea of Japan), it is clear this is a very snowy place.

Yesterday I spent a few hours touring low angle terrain above the Ikenotaira Onsen ski area with Miles Peterson, a guide with Dancing Snow, a local outdoor adventure company.  Although the classic Japanese tree skiing is still quite brushy due to a below normal snowpack, we did pass through some beautiful beech forests with well spaced trees. 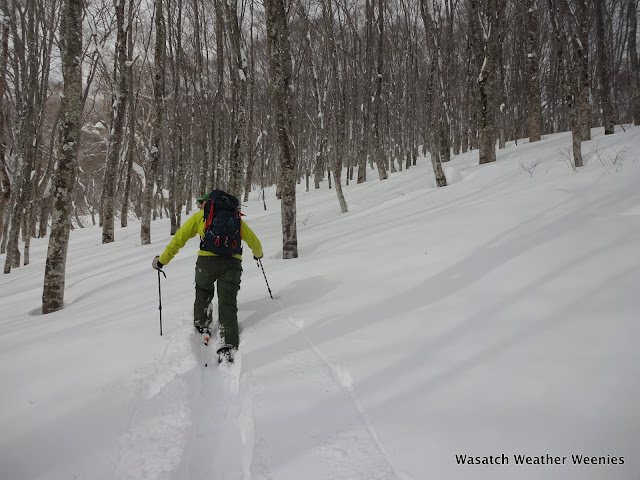 The Myokokogen area has an abundance of lower angle terrain and thus touring today seemed to be a hopeless endeavor due to the heavy snowfall.  Many of the larger resorts here have a significant vertical drop, but with limited (or non-existent) steep terrain.  As a result, I headed over the Seki Onsen ski area, a small, throwback ski area, which turned out to be a wonderful experience.

Seki Onsen has only two lifts: An old double chairlift and an old single chairlift.  You pay right at the lift and join a handful of intrepid skiers waiting for first tracks. 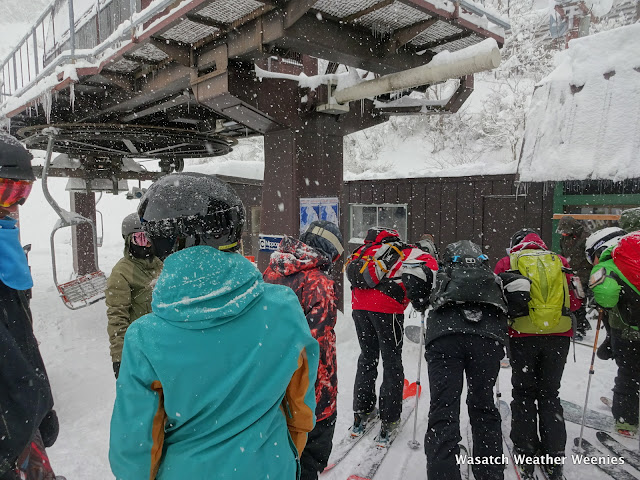 At least on this week day, there were no lines to speak of other than the short queue prior to the 9 am open.  I suspect there were no more than about 100 people at the place.  They don't even have a lift ticket to clip to your jacket.  They give you a slip of paper and you show it to the lift operator for the first run.  After 9:10 am, they don't bother checking anymore.

The first lift is a double.  Ahead of me are Jeppe and Stephan, a couple of Danes who were kind enough to let me tag along for the day. 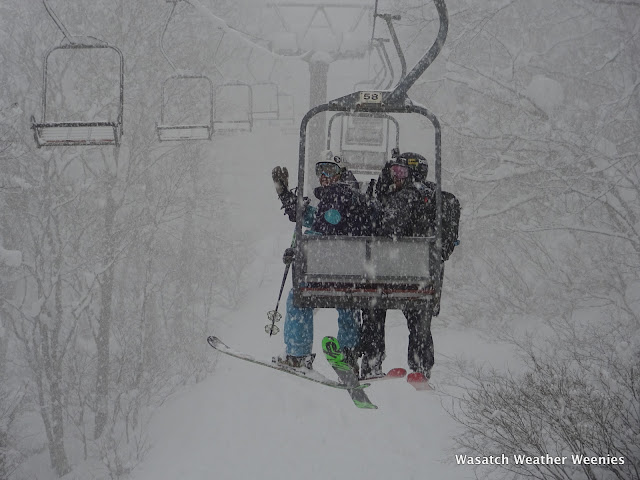 The upper lift is an ancient platform single chair.  No back rest or safety bar here, but if you fell today, you landed in thigh deep cold smoke.  No worries. 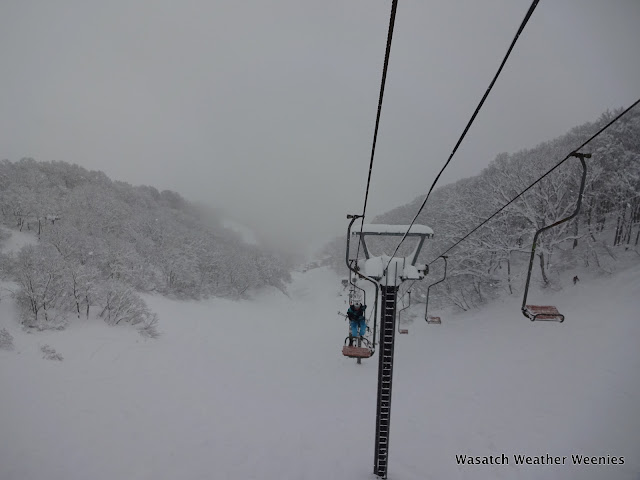 Not only is it a single, but they only load every other chair.  One wouldn't want too many people crowding the top.  The meager lift capacity is nothing to worry about.  The place is empty, as you can see in the photo above.

Although it is a small resort, there was just enough hill and pitch that we spent most of the morning in the JaPow White Room. 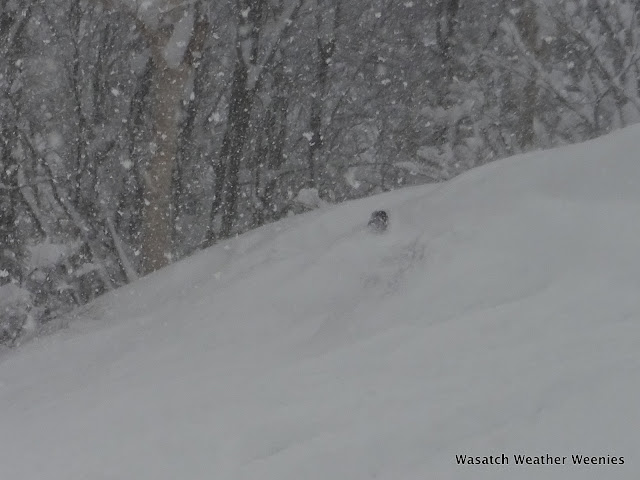 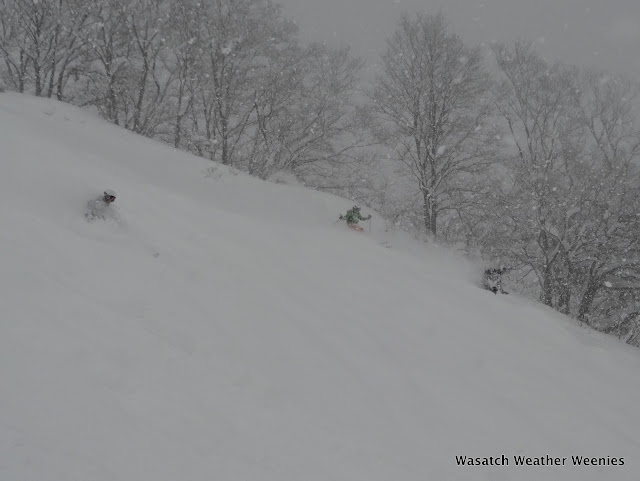 At the very rustic, but super friendly on mountain restaurant, there was this tribute to Craig Kelly.  RIP. 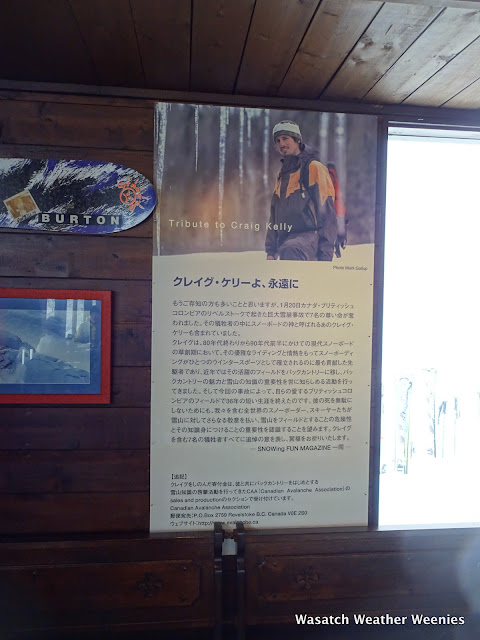 I quit early to take a short walk though the small village of Seki Onsen, which presented a classic Japanese scene in winter. 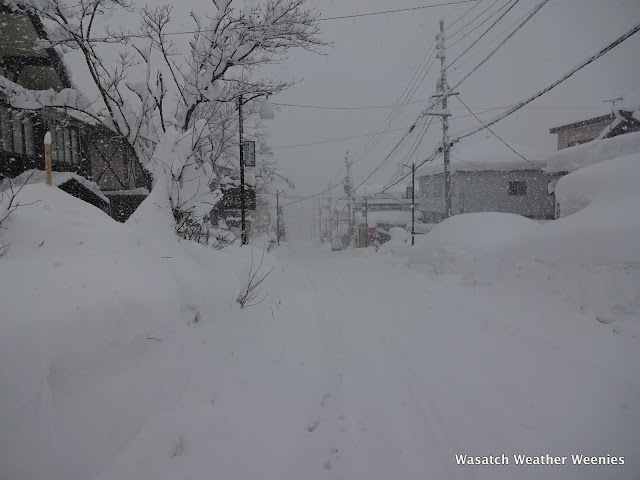 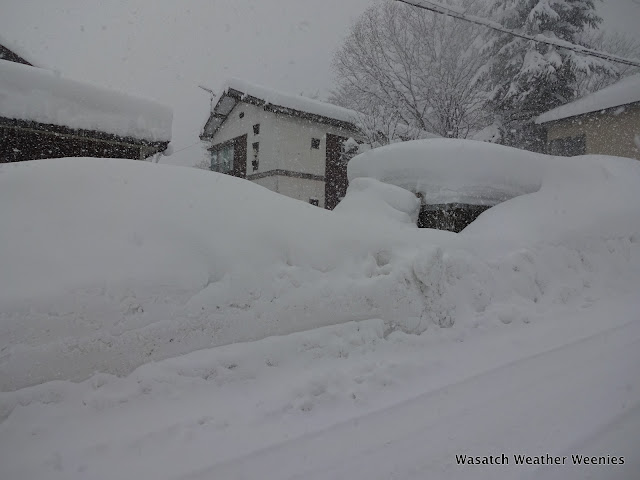 Here in Myokokogen, I've been staying at the Myoko Mountain Lodge, which I recommend highly (Note: I'm neither getting paid or comped a room to say that!).  The owners serve up an amazing breakfast, an equally amazing dinner three nights a week, and bend over backwards to make sure everyone gets transported to their various destinations. 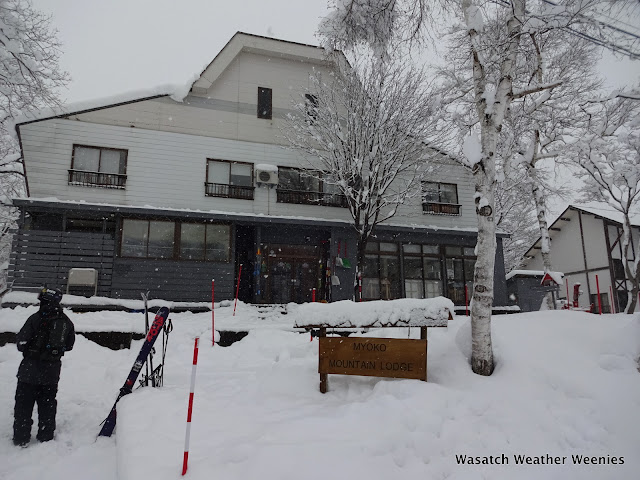 The dining room is also a very peaceful spot to get some work done in the afternoon. 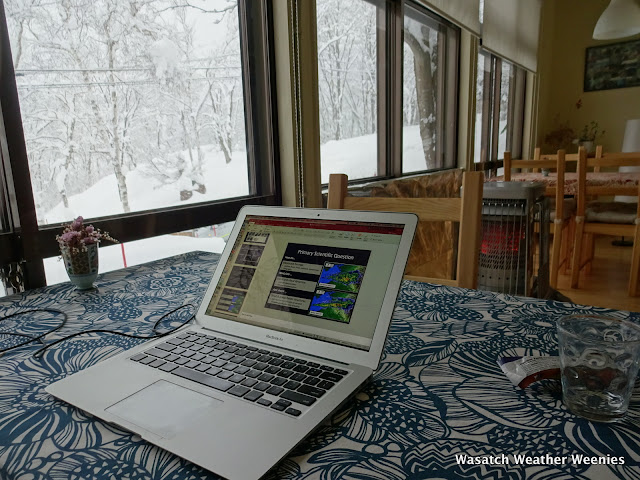 I might add that they have a hell of a snowblower.  Nearly everyone in these parts has one like this, which is further evidence of the copious snowfall. 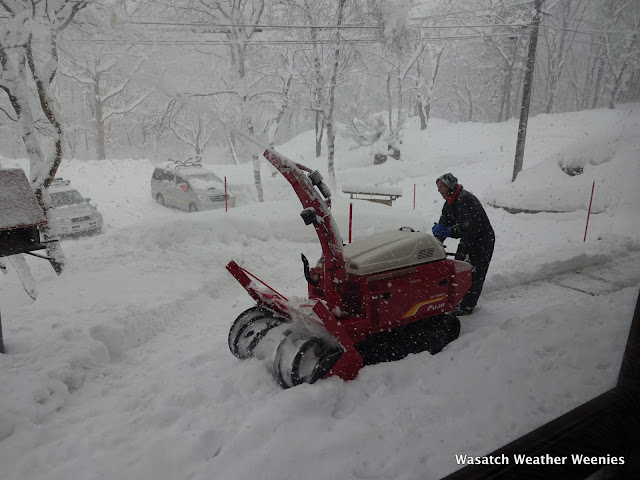 The forecast for tonight and tomorrow is for a meter of snow, with another meter the following day when I'm supposed to begin the trek home.  Perhaps I will never leave!
By Jim S Posted at 1/12/2017 11:01:00 PM