Why Deep Cold Pools Are "Good"

I arrived back in Salt Lake City yesterday afternoon to somewhat murky skies.  After 2 weeks in Japan, my first activity wasn't work related.  Instead, I simply lied on the couch, ate junk food, drank beer, and watched football like a good American.  It's good to be home!

Today, however, I'm at the office and taking a closer look at those murky skies.  The sounding from this morning shows a very deep cold pool over the Salt Lake Valley, with a capping inversion based at around 775 mb, which is at an altitude of 2264 m (7428 feet). 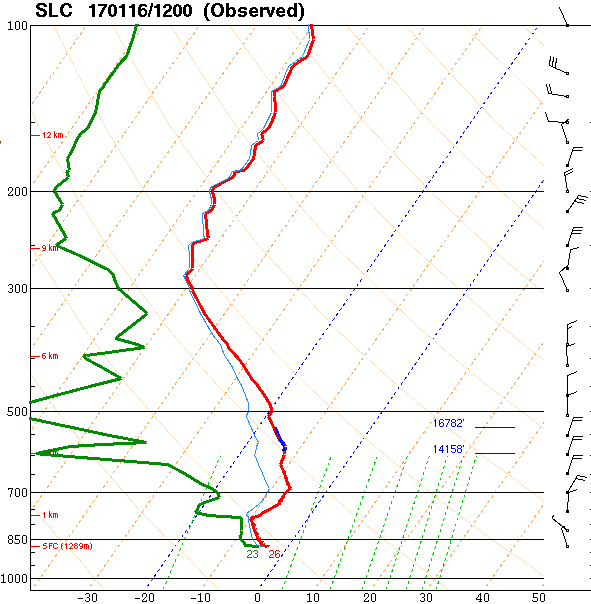 Although people often become alarmed about deep pollution (a.k.a. inversion) events, for residents at lower elevations along the valley floor, they typically feature lower PM2.5 concentrations than shallow events because pollution is distributed through a deeper layer.  Indeed, while the air quality isn't good, we're only in the moderate category and levels for the event so far maxed out at "only" 30 ug/m3 about two days ago.
PM2.5 levels would be much higher if the inversion was closer to the valley floor and the cold pool was shallow, which results in pollution accumulating in a much smaller volume of air.

So, the bottom line is that when you see stratus and pollution tonguing up to Snowbird, that's probably "good" for valley residents.  On the other hand, it could mean you being exposed to some pollution at mid elevations in the canyons.
By Jim S Posted at 1/16/2017 01:03:00 PM