Due to my travels in Japan, I haven't skied in the Wasatch since last year!  Last calendar year that is (31 December 2016), so I have virtually no idea what the skiing has been like the past several days, although I've heard reports that a refresh is needed.

We'll get some snow today and tonight that should help.  Radar shows relatively light echoes covering much of northern Utah at 1559 UTC (0859 MST) this morning. 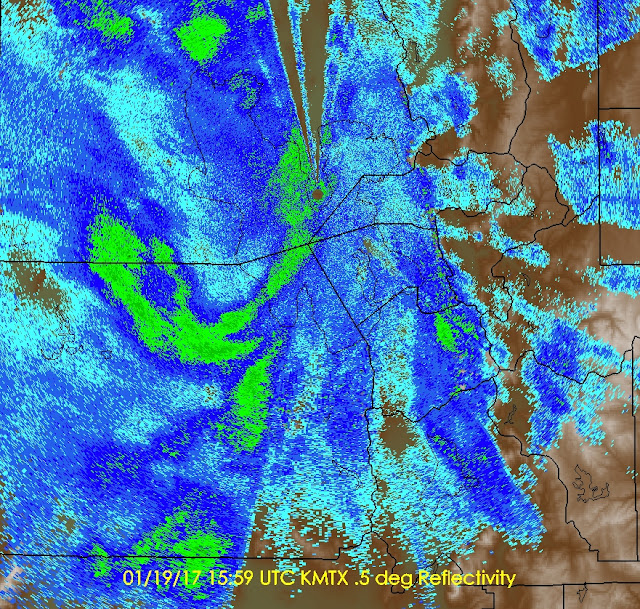 This is consistent with the light snow falling on campus and along much of the Wasatch Front this morning.  Similarly, snowfall rates in the mountains have so far been light as well.

I expect things to pick up in the mountains during the day today as the trough axis swings through.  Right now, this looks like a modest refresh, with 4–8 inches falling at upper elevations in the Cottonwoods through 5 AM tomorrow morning.

One thing that surprised me looking over the models today is how bullish the NCAR ensemble is.  By 5 AM tomorrow (20/12Z on the plot below), most members are putting out 0.6 to 1.15 inches of water at Alta.  Those members are much wetter than the NAM and inline with the GFS, which is usually too wet.

Thus, I'm curious to see how this one pans out in the Cottonwoods.  My 4–8 leans toward the NAM, which has been a reliable performer and was initialized more recently.  The 1200 UTC NAM, for example, puts out 5" of snow and 0.41" of water at Alta Collins.  Something verifying closer to the wetter NCAR ensemble members, would, however, be more satisfying.
By Jim S Posted at 1/19/2017 09:32:00 AM