The situation in the Salt Lake Valley continues to deteriorate and is becoming quite serious.

Here on campus, we are currently fogged in.  Although depressing, it doesn't look as ugly as the pollution does under clear skies, but don't be fooled. 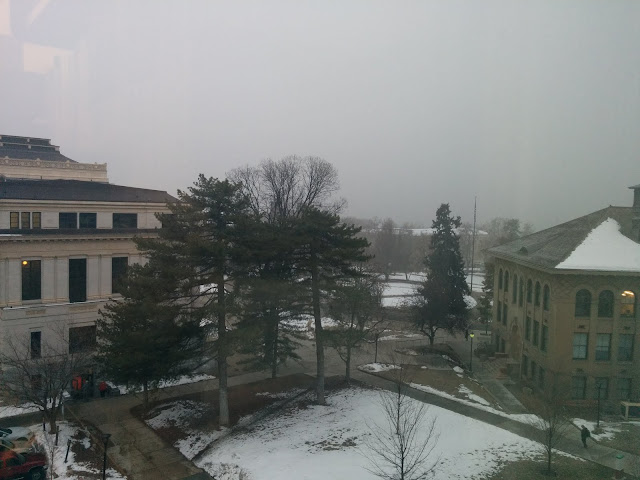 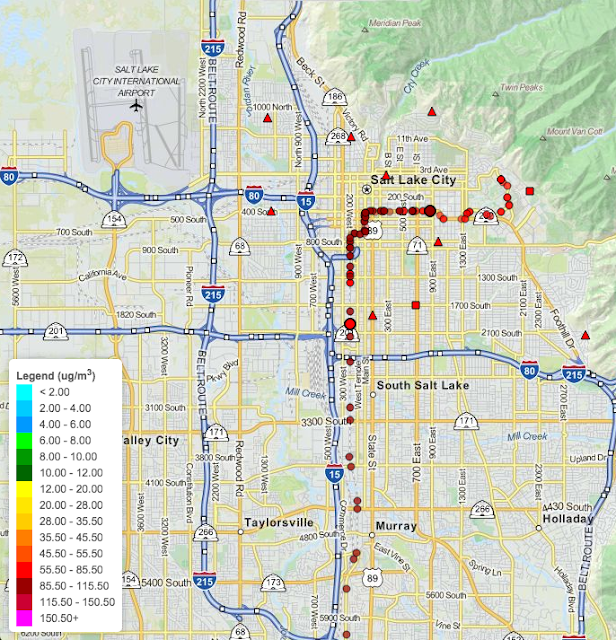 I did a quick inspection of the data and found a maximum concentration of 111 ug/m3, which is well into the unhealthy category.

The terrible situation we are in is one of our own doing.  Persistent cold pools (a.k.a., inversions) are naturally occurring phenomenon in the western United States during the winter.  One shouldn't equate inversions with air pollution.  Inversions happen all over the west.  Pollution happens in those areas that experience inversions and where emissions are concentrated.

At this point, we're up to our eyeballs in alligators.  We have absolutely terrible air quality and things are not going to improve until Mother Nature cracks this inversion.  What will that take?
The situation we have right now is one where dense, cold air is pooled in the Salt Lake Valley (and other basins of northern Utah).  From March to October, there is typically enough energy provided by the sun each day to warm that airmass and allow it to mix with the air aloft, limiting pollution concentrations.  This time of year, however, we don't have enough solar energy to mix out the cold, dense airmass.  We're basically mired in an oil and water situation.  I did a quick calculation and found that the air near the valley floor is about 25% more dense than that at crest level.  That's a big number.

One can do another quick calculation and find that for a valley temperature of 0ºC one needs to bring in an airmass with a crest-level temperature of about -17ºC to remove the cold pool with no help from the wind.  You can get a way with a higher crest-level temperature if the valley is a bit warmer (such as might be found in the afternoon), or if clouds are present (the release of heat in clouds helps invigorate turbulence).  So, perhaps we could do some damage if we got down to say -12ºC or so.

Of course if you add wind, you can sometimes get a bit more bang for the buck.  It's very hard, however, to determine how wind will influence a cold pool unless it is very strong.

Which brings us to our sole glimmer of hope, the trough that is forecast to brush by Utah on Saturday evening.  This will drop our crest-level (700-mb, 10,000 ft) temperatures to about -6ºC to -8ºC.

That by itself is not enough to crack the inversion, but there is also an increase in flow aloft and at low levels.

We really don't have the tools today to determine if this will yield a full mix out (I doubt it, but can't rule it out), partial mix out at all elevations, a scouring out of the pollution from the top down, leaving a lens of pollution near the valley floor, or no change.  This is in my view a critical area for research as it is forecasting of these weaker trough passages and their influence on inversion and air pollution strength that is the hardest part of forecasting these events.