In the Grips of a Monster Ridge

After a run of active weather and regular powder refills from about mid December through early February, the wheels have come off our winter.

We are now fully in the grips of a monster upper-level ridge that will keep the mountains dry and the valley inverted.  On the positive side, that means warm, sunny days in the mountains.  On the negative side, we are staring directly down the barrel of what will be a very poor air quality episode.

Meteorologists use a diagram known as a Skew-T to examine upper-air soundings collected by weather balloons.  In these charts, lines of constant temperature are "skewed" (blue dotted lines below).  Yesterday morning's sounding showed a shallow inversion at low levels.  The surface temperature was 26ºF -3.3ºC and the temperature at the top of the inversion near 800 mb was about 0ºC.  Above this level, at 700-mb near the crest of the Wasatch Range, the temperature was about -4ºC.

The big change overnight was warming at crest level as the ridge moved further eastward.  Temperatures at 700-mb are now around 0ºC.  A close look at the sounding reveals a temperature increase from -2.9ºC at the surface to 1.4ºC just below 700 mb.

Those are the gory details.  Bob Dylan would simply say that you don't need a weatherman to know that we're in an inversion.

Temperatures aloft will continue to rise through late Tuesday when the ridge axis is centered over the Intermountain west and the ridge is at maximum intensity.  At that time, forecast free-atmosphere 700-mb temperatures (near 10,000 feet) are near 4ºC. 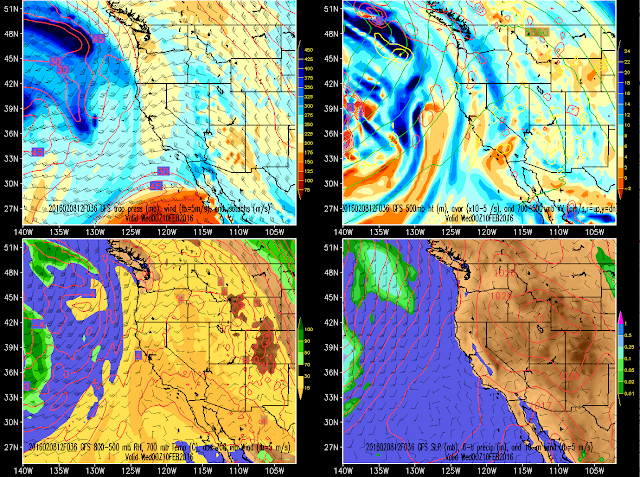 Such temperatures are very near the outer edge of anything previously observed in February over Salt Lake City.  The graph below shows the record maximum (red line), median (black line), and record minimum (blue line) 700-mb temperatures observed in soundings collected either in Ogden or Salt Lake City over the past few decades.  In February, the all-time record is 5.8ºC on Feb 1.  For the periods we are heading into (Feb 8–12), the highest previously observed is 4.4ºC.

Bottom line: This is going to be an outlier inversion event in terms of meteorological strength and duration, a situation further exacerbated by the extensive snow cover on the valley floor.  From an air-quality perspective, it will easily be the worst event of this season, with the situation worsening through the week.
By Jim S Posted at 2/08/2016 10:16:00 AM