This weekend I was able to get back into the mountains after a 3 week hiatus.  The transformation during that time was quite dramatic, especially on south-facing aspects.

The importance of aspect (i.e., the direction a slope faces) cannot be understated in Utah and for skiers, especially this time of year.  Given a few days of sunny weather, it is often possible to find corn (or sun crust depending on the time of day) and dry powder on adjacent slopes.

It was pretty easy to find examples of such stark snow contrasts this weekend.  For example, in the photo below, the snow on the left was corn (technically a stout melt-freeze crust since it was taken this morning after the overnight freeze), whereas the snow on the right was soft, settled, dry snow.  The only difference was aspect.  The slope on the left was southeast facing, the slope on the right northwest facing. 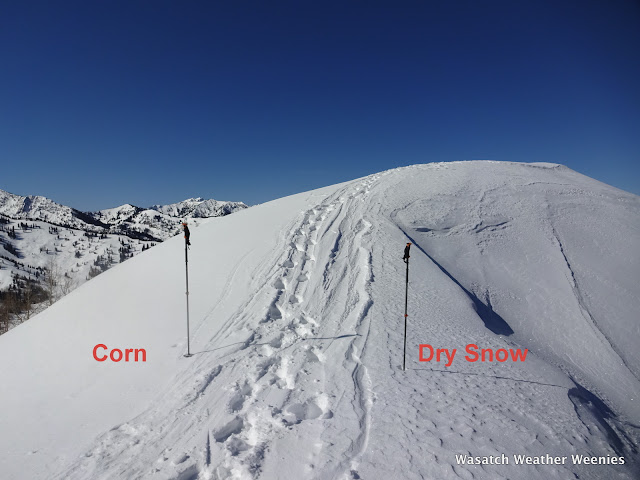 The graphs below show the amount of direct solar radiation on north, west, east, and south facing aspects at 40ºN (very close to the latitude of the central Wasatch) as a function of the time of day on June 21, March/September 21, and December 21.  I've highlighted with red lines the 30º slope angle and with green lines solar noon.

In a dry, interior climate like Utah's most of the energy for melting snow comes from the sun.  Even when atmospheric temperatures are above 32ºF, snow on upper-elevation north-facing aspects this time of year often doesn't melt during clear days because the solar input and heat flux from the atmosphere into the snow are countered by long-wave cooling (the snowpack is always emitting long-wave radiation, but receives very little back when skies are clear) and cooling from sublimation.  If you want to get the snow on those aspects to melt, it often takes thin or broken low clouds, which supply some long-wave radiation and sometimes reflect some solar radiation onto the slope (a phenomenon known for better or worse as greenhousing).

Here are two additional observations from the weekend.  First, as one might deduce from the graphs above, the sun is high enough now that it is illuminating all but the steepest north-facing slopes at noontime.  As a result, the views are simply spectacular.

Second, although I was out of town for the intense frontal passage during President's week, I was able to find evidence of it in the form of downed trees.  I saw several scenes like this on my tour this morning. 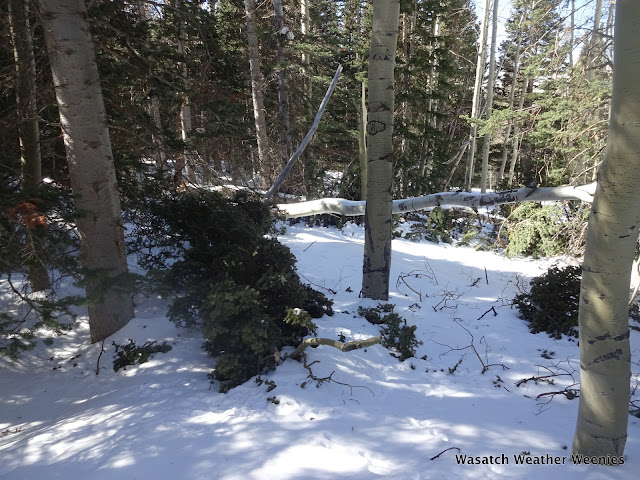