The Next Atmospheric River

Our second atmospheric river event in a week's time is setting up over the Pacific Ocean with a tremendous export of tropical moisture from the area near Hawaii streaming northward toward the Pacific Northwest.

Over the next 36 hours, the atmospheric river will move eastward and sag southward.  By 5 PM tomorrow (Wednesday) afternoon, the axis of strongest water vapor transport will be draped across southern Idaho and Wyoming.  As was the case with the atmospheric river event this past weekend, the strength of the water vapor transport over the interior will be unusually high for this time of year with a frequency of occurrence during this 3 week period of about once every 5 years or rarer. 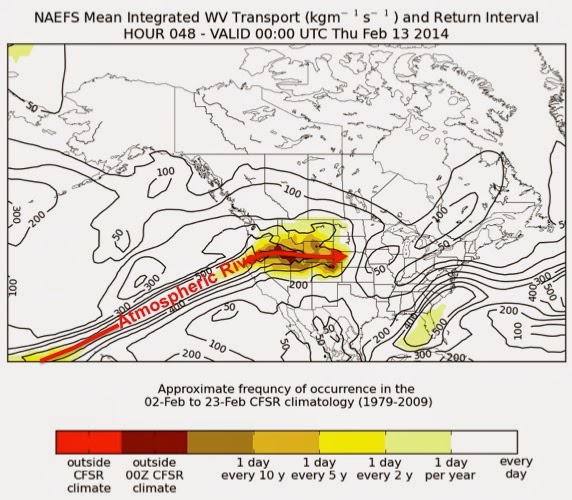 It certainly looks like the upper-elevation mountains of southern Idaho and western Wyoming are going to get another pasting, as indicated by the GFS accumulated precipitation through Saturday morning.

As you might deduce from the plot above, the mountains of northern Utah sit on the southern periphery of the heaviest 4-day accumulated precipitation in the current model forecasts.  Nevertheless, this does look like another significant event for the northern Wasatch and the Bear River Range (although not as big as the previous storm), with the Cottonwoods and southern Wasatch likely seeing their most significant precipitation late Wednesday and Thursday when the AR dips southward.

This is also going to be another warm event thanks to the Hawaiian connection.  Direct output from the 12-km NAM (below) suggests rising ridge-top temperatures on Wednesday with the snow-to-liquid ratio dropping to less than 10 (i.e., more than 10% water content).  Snow levels will also rise to close to 8000 feet in the Cottonwoods.  Provided we only get a brief visit by the AR, as presently forecast, water totals in the Cottonwoods will be much lower than we saw during the last event, although snow and snow water equivalent rates could be strong at times late Wednesday and Thursday.