Yesterday's storm was great, exceeding expectations in the valleys and mountains.  It has been a while since we've had a storm that came together to maximize precipitation generation, but yesterday's did.  The radar filled in nicely as the trough approached, precipitation continued pretty much without abating throughout the event, and the post-trough, northwesterly flow was quite productive.  It was also a big event in the valley as well as the mountains.  Here are some numbers (lowlands courtesy NWS):

I've emphasized the higher lowland totals above, but an interesting aspect of the event is that there was very little contrast in precipitation amount between from the Wasatch Front lowlands to the mountains.  Nevertheless, the mountain snowfall brought Alta-Collins up to the magical 100 inch total snow depth.  Hooray!

Our next storm is currently over California, with the parent low further west and associated with a beautiful spiral cloud band.  No need to deface such a beautiful storm by adding an analysis. 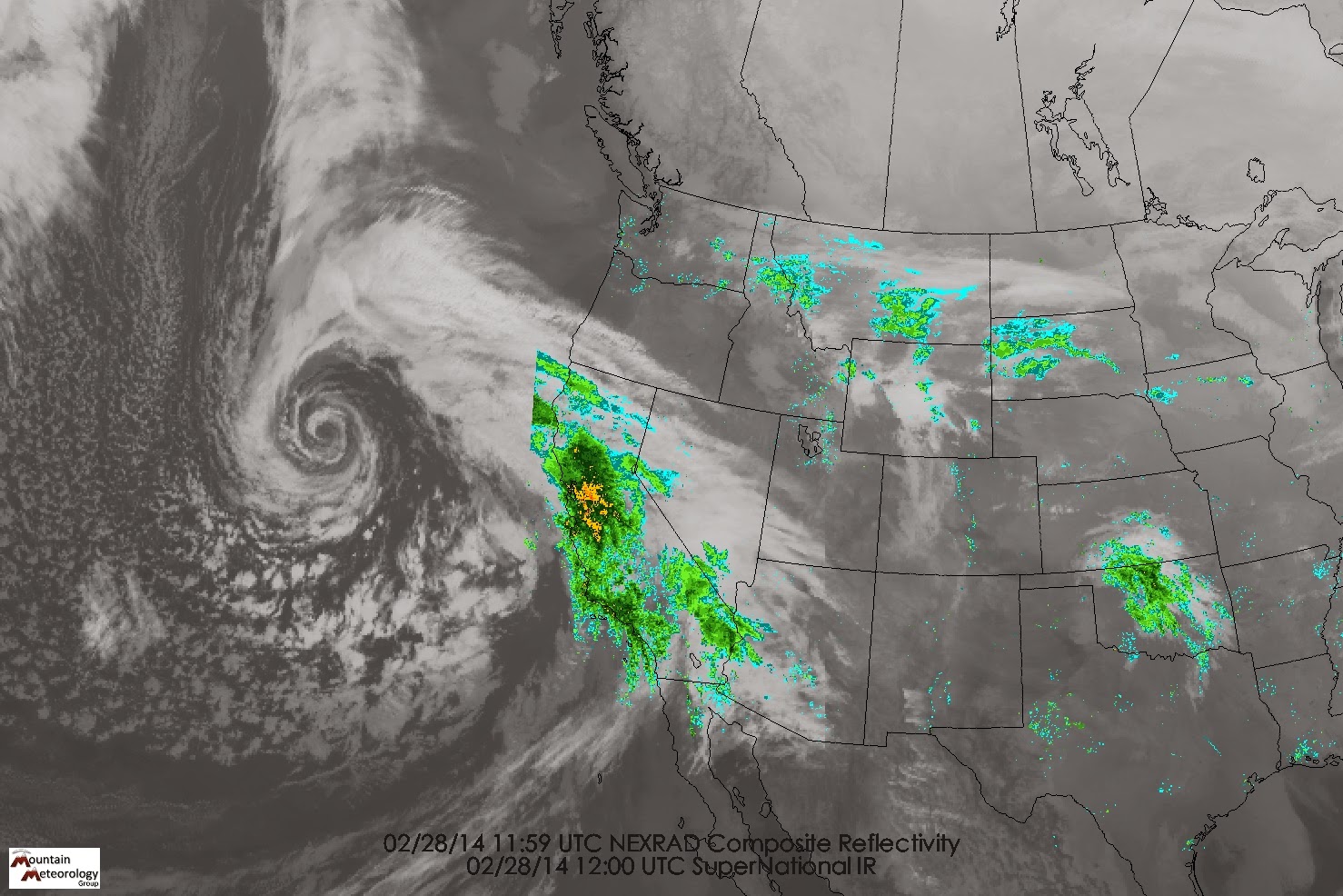 This is an unusually deep cyclone for this latitude at this time of year with a central pressure at 1200 UTC of 976 mb.  The analysis below from the Ocean Prediction Center shows significant wave heights of 30 feet just south the low center.  The narrow jet of strong winds that generates those waves is called a sting jet, and Norwegian meteorologists call this very dangerous region for marine vessels the poisonous tail of the bent-back occlusion as it is located where the occluded front wraps around the low center like a scorpion's tail.

Although the poisonous tail won't be stinging Utah, will will get some strong mountain winds as southwesterly flow reaching 55 knots at 700 mb extends across the central Wasatch late tonight.

For tonight through 5 PM Saturday, the NAM goes for 1.42" of SWE and 14" of snow in the upper Cottonwoods, in increase over yesterday.  In contrast, the GFS is now less productive, going for 0.64" of SWE with 5" of snow.  Such, model variability is not uncommon in this business and reflects some of the forecast uncertainty.  As you might infer from those numbers, much of this event will be of the high density variety, due to both high temperatures and high winds, with water contents of 10–12% likely.  Given the high density of the snow, I think I'll go for another 8–14" at Alta-Collins by 5 PM Saturday, which would bring the storm-cycle total to 21–27".
By Jim S Posted at 2/28/2014 08:10:00 AM