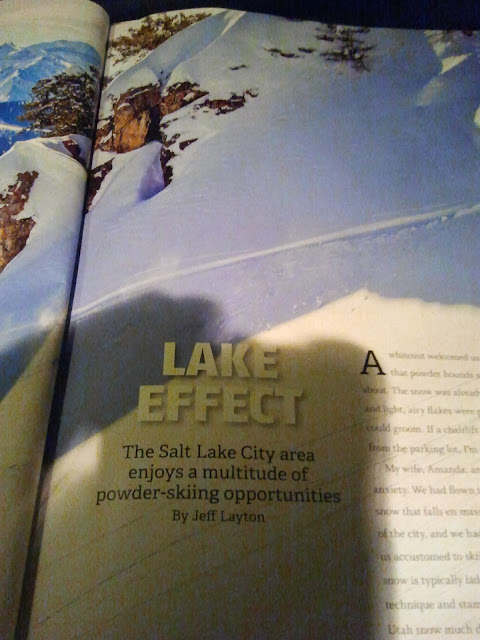 Most of what you read about Utah snow is entirely bogus and makes little sense meteorologically.  Yet another example of Zombie meteorology that needs to die is an article by Jeff Layton in the latest Alaska Airlines Magazine entitled Lake Effect:


It’s almost unfair that Salt Lake City has so much excellent skiing at its doorstep, but there is a scientific explanation, my friend Andy Mars told us the next day as we rode one of Brighton’s lifts. The Wasatch mountain rise up from the east edge of town, and the massive Great Salt Lake flanks the city to the west. Winter storms extract moisture from the lake - which doesn’t freeze. The salinity of the lake water gives the snowflakes unique powdery properties, and they pike up in totals that regularly exceed 500 inches per season.

While it is true that Salt Lake City has a lot of excellent skiing at its doorstep, and the average snowfall in portions of upper Little Cottonwood and Big Cottonwood exceeds 500 inches, just about everything else about this paragraph is wrong.  Scientific studies have shown that lake-effect storms produce only about 5% of the total precipitation in the Cottonwoods from mid September through mid May.  The idea that the salinity in the lake gives snowflakes unique powdery properties is equally bogus.  You can find drier snow in Colorado.  What makes powder skiing in Utah so great isn't that the snow is unusually dry, but that we get a lot of it and it frequently comes in storms that produce right-side up snowfalls (meaning that we get a lot of storms that produce heavier, higher density snow at the beginning and lighter lower density snow at the end).