The model forecasts just seem to get better each day for this weekend's storm (with some mountain snow showers on Friday too).  Let's hope that they aren't just teasing us and that Mother Nature will ultimately deliver.

Our potential savior system is an upper-level short-wave trough currently located just to the east of the Kamchatka Peninsula (X below).  It is expected to roll over the long-wave ridge and then dig into the northwest United States. 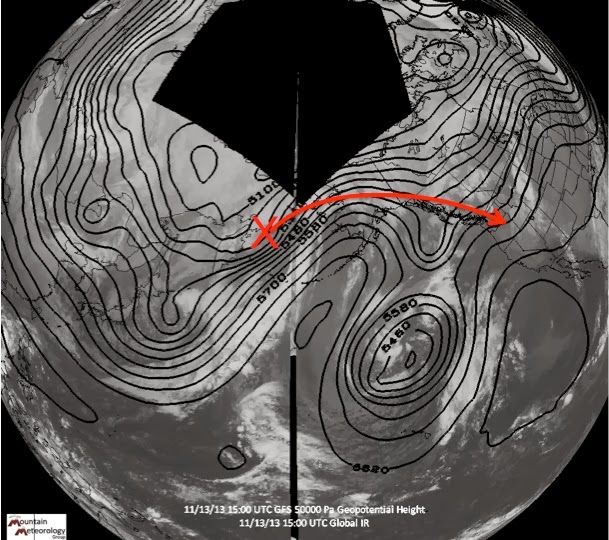 The models have disagreed the past few days, but as things stand now, it appears that the GFS, NAM, and ECMWF agree that we will be seeing a storm on Saturday and possibly Saturday night (depending on how productive the post-frontal environment and lake effect prove to be).  Further, this is an event that looks cold enough to bring snow to the valley floor.

It is a bit early to be thinking about snowfall amounts as a shift in the track of the upper-level trough could really screw things up (and perhaps the more excited we get, the more likely that is to occur!), but the models are currently calling for this to be a major event in the mountains.    Here are some numbers from the latest NAM showing a bit of light snow on Friday when a weak trough moves through followed by much heavier precipitation late Friday night and Saturday.

Should the storm deliver, channel your inner Jedi and resist temptation to throw caution to the wind.  All that weak, faceted snow currently on upper elevation slopes is just sitting there waiting for a load and a trigger.  If the forecast pans out, the situation will be very similar to the November 13, 2011 "avalanche imbroglio" that featured at least 12 human triggered avalanches in upper Little Cottonwood Canyon, including one that killed professional skier Jamie Pierre.  Click here to see and read the Utah Avalanche Center list for that day and remember that the terrain at the resorts is not currently subject to avalanche control and needs to be treated as backcountry.
By Jim S Posted at 11/13/2013 10:31:00 AM