I'm not much of a fan of long-term outlooks for snowfall in northern Utah's mountains.  There is a tendency in the western United States for the southwest to be dry when the northwest is wet and vice versa, so northern Utah sits near the transition zone between these two regimes.  That tendency is sometimes referred to as a precipitation dipole, and it is related to the see-saw between El Niño and La Niña in the tropical Pacific Ocean, with the former favoring a wetter southwest and the latter a drier southwest, although such correlations aren't perfect.

For this winter, it is looking increasingly likely that La Niña conditions will predominate.  This means cooler than average sea-surface temperatures in the tropical Pacific east of the dateline and warmer than average temperatures in the tropical Pacific west of the dateline.  This affects the location of tropical thunderstorms and related precipitation complexes and, in turn, the position of the jet stream in midlatitudes.

The National Weather Service Climate Prediction Center (CPC) currently expects La Niña to develop in the next couple of months, with a 70-80% chance of La Niña during this winter (Dec-Feb).  For more, see the diagnostic discussion they issued this morning.

Frequently seen characteristics during La Nina winters include a colder northwest North America, a wetter US Pacific Northwest, and a drier southern United States, as depicted below. 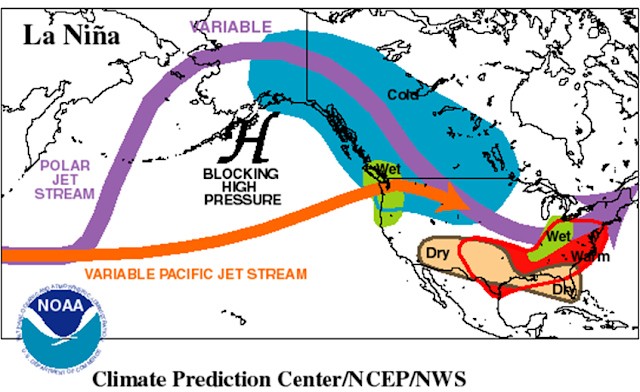 There is, however, variability from event to event, so I think of such patterns as a loading of the dice.  And, because northern Utah is in the transition zone between the wet northwest and dry southwest, there's not much useful correlation between La Niña (or El Niño) and snowfall at Alta.  This is illustrated by the graph below, which shows the 3-month accumulation of snowfall at Alta Guard compared to an index of La Niña/El Niño strength (more discussion of this at https://wasatchweatherweenies.blogspot.com/2015/08/wasatch-weather-weenies-survival-guide.html). 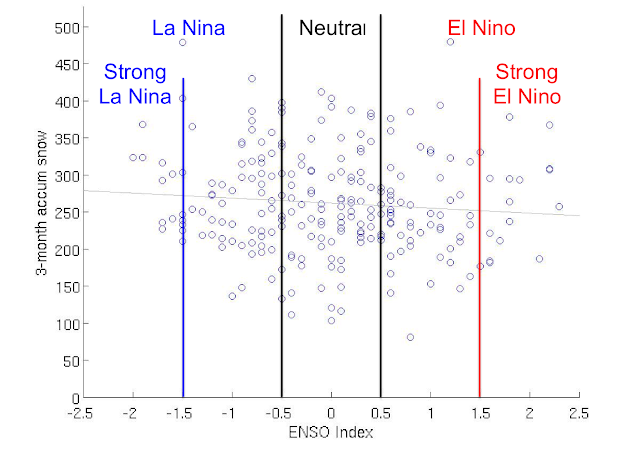 In my view, the future of seasonal forecasting lies with numerical modeling.  Such forecasts are, however, in their infancy and perhaps where numerical weather prediction was in the 1970s.  Seasonal forecasting requires the ability to simulate not just the atmosphere, but the oceans, the biosphere (plants and their response), and the cyrosphere (ice and snow coverage) and their interactions.  We are making great progress in these areas, but we need higher resolution modeling, better "coupling" between these Earth system components, and much larger ensembles.

That being said, we can take a look at what these modeling systems are producing for this winter (December-February).  Forecasts of precipitation anomalies (departures from average) from several modeling systems are below.  One can see the influence of La Niña in these forecasts with most systems producing a drier southwest and southern United States and a wet Pacific Northwest.  One outlier is the GEM_NEMO modeling system, which is keeping the entire west coast dry.

These models do not resolve the fine-scale terrain effects of the western United States.  This is just one of many shortcomings.  Some call for northern Utah to be wetter than average (e.g., NCEP_CFSv2).  If you are looking for hope, none have the region around the central Wasatch below average, although I don't put much stock in that.

We can also look at the temperature anomalies, and here we see most models are calling for a warmer than average winter across most of the continental US, although there is one exception, the GEM_NEMO again which goes for a colder than average western US.

Putting all of this together, I'm concerned about this winter extending the drought in the southwest US.  Although not a guarantee, the dice seem to be loaded for below average precipitation and above average temperatures.  It's tough to say what will happen in the northern Wasatch given that we're in the transition zone. Ski it if it's white.