It is nearly a virtual lock that this coming winter will be an El Nino winter and most indicators are suggesting it will be a strong event (see the El Nino advisory issued by the Climate Prediction Center yesterday).  Given that we've been talking about this event for several months, this will either be the most anticipated event of all time or a colossal forecast bust.  Apparently one NASA scientist called the event a Godzilla El Nino, with the phrase going viral now in the media.  You'll see all sorts of hype and hyperbole in the coming weeks with regards to what kind of ski season to expect.  Here's a survival guide for Wasatch Weather Weenies.

1. Don't worry, be happy.  The correlation of Wasatch snowfall with El Nino and La Nina is so low that there's no point worrying about it.  The graph below shows the Alta Guard snowfall vs. the El Nino phase, as we've discussed in previous posts (e.g., El Nino Likely for the 2015–16 winter, 12 June 2015).  Nobody can reliably predict what is going to happen in the Wasatch this winter, so don't listen to people who claim they can. 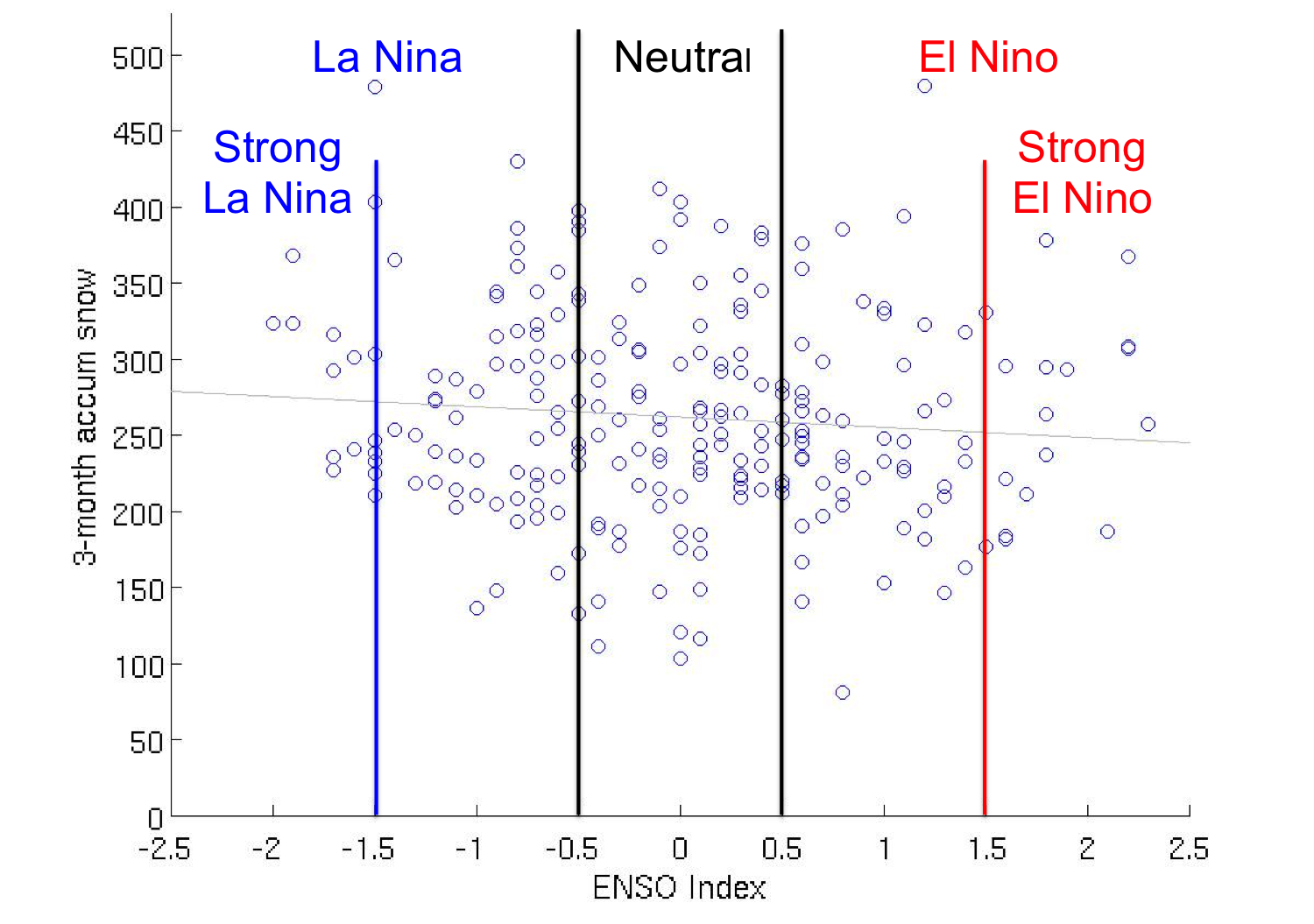 2. Beware of small sample sizes.  Every El Nino period has somewhat different characteristics and weather.  El Nino is an important player in climate variability, but it isn't the only game in town. Because of the strength of this El Nino, you'll see all sorts of predictions for the coming winter based on a small number of events.  In some instances, a small sample can be dominated by a signal, but in others, you're just seeing noise.  Buyer beware.

3. Play the odds.  Based on existing understanding and a wide range of predictive tools, the most likely areas for above average snowfall and snowpack during the coming winter is in the upper elevations of southern California,  Arizona, and New Mexico.  The dice are somewhat loaded, but not as strongly, as one moves northward into the upper elevations of central California, southern Utah, and southern Colorado.  Whether or not these areas get off to a fast start to the ski season in November and early December or get hammered on your vacation is completely at the whims of the weather gods.  However, these are the areas that have the greatest likelihood of above average snowfall by the end of winter.

4. Remember that the friendly confines of the central Wasatch really are friendly. It snows a lot here.  Yeah, last year sucked, but most bad years in the central Wasatch are still better than a good year elsewhere.  Are you really going to leave the central Wasatch to ski the Arizona Snowbowl because they are likely to have an above average snow year?  Everything is relative.
By Jim S Posted at 8/14/2015 08:57:00 AM