I woke up this morning, looked out the window and lo and behold there were the mountains.  It wasn't clear, but it was less hazy than I've seen it in the morning in a few days.

I decided to get out for a quick hike while the getting was good.  I opted to hike up Hidden Peak to take advantage of the tram on the descent as my knees have been feeling tender of late.  Up high it was actually fairly nice.  Smoky, but not terribly so.  If you look carefully at the photo below, you can see considerable layering of the flow with a nice clear layer near crest level. 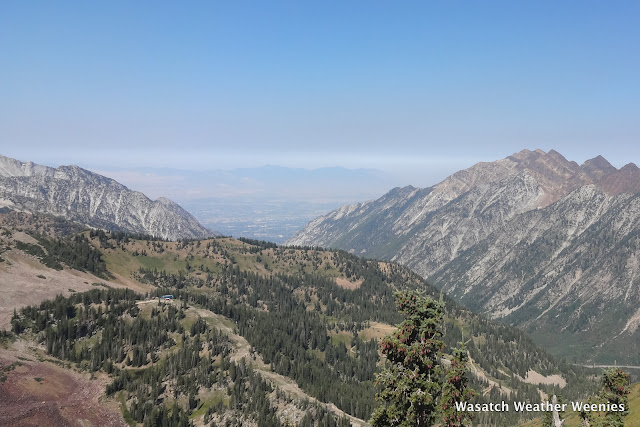 Things are, however, deteriorating again, at least in the valley.  The trace below shows the PM2.5 concentrations at the University of Utah over the past five days.  There was a brief drop to just below 10 ug/m3 at about noon yesterday, followed by another bing increase, and then the drop overnight to the lowest values we've seen since the 18th.  Unfortunately, PM2.5 concentrations have jumped back up to 20, although at least for now, they are lower than they have generally been the past few days.

Amongst the many fundamental differences between this pollution event and our winter inversion events is that most of the PM2.5 is being transported in rather than being produced from local emissions. As a result, changes in flow direction can cause some large variations in PM2.5.  I guess for now the best approach if you want to get outside is to take advantage of the less hazy periods when you can.
By Jim S Posted at 8/22/2015 01:43:00 PM