Breath Deep While the Getting is Good

A shift in the wind overnight has given us a temporary reprieve from the smoke in the Salt Lake Valley, but brought in some clouds that kept it remarkably warm overnight.

Many of the features in yesterday (Monday) morning's sounding at the Salt Lake City airport were typical of July with an inversion at the surface (which burns off rapidly with morning heating) and then what is known as an "inverted V" profile up to about 500 mb.  The inverted V is characteristic of something known as the residual layer, a remnant of the previous days boundary layer in which thermals generated by surface heating mix the atmosphere.  The flow was light at low levels and northwesterly aloft, the latter bringing in smoke from upstream sources.

This morning there are two key changes.  First, the flow has increased and shifted to southerly at low levels and shifted to southwesterly aloft.  This is why we are getting a temporary reprieve from the smoke.  Second, clouds and moisture have moved in at mid levels, near 500 mb. 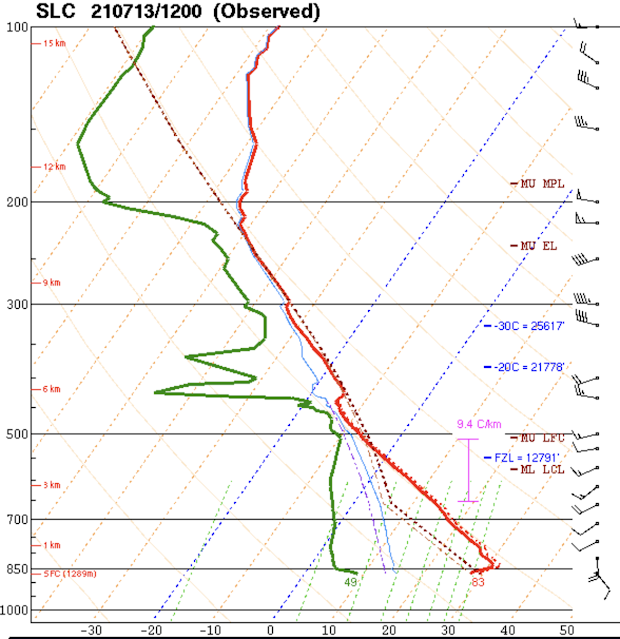 The increased low-level flow and cloud cover led to a remarkably warm night.  The overnight minimum at the Salt Lake City International Airport was only 82˚F.  It's possible that it dipped below that a degree or so after 6 AM when we get the minimum temperature report (the next update is at noon), but regardless, minimums in the low 80s are ridiculously high.  The highest minimum temperature ever observed at the airport is 81˚F and there have only been three days with a minimum of 80˚F or higher.  To be official, however, it has to survive through the calendar day, so much will depend on what happens later today and this evening.
For that period, we will have to see if the monsoon convection decides to do more than tease us.  As illustrated by the HRRR forecast valid 2300 UTC (5 PM MDT) this afternoon, we are right on the edge of showers and thunderstorms focused mainly in central and southern Utah.  This may be a case of close but not close enough unless things shift northward a bit.

What about the smoke?  There's so much smoke everywhere that it's perhaps a bit of a miracle that we're as clear as we are this morning.  Check out the satellite image from 1441 UTC (0741 MDT).
If one believes the HRRR, "periods of smoke" is probably the best forecast one can make.  The air to our south and southwest is less smoky at low levels, but to our north and west is quite smoky.  Given the shifting winds over the next day or two, we will probably see a lot of variability in smoke.  You can see in the smoke forecast for 0600 UTC (midnight) tonight that high smoke concentrations come in with a shift to northwesterly flow tonight, but there are lower concentrations just to the south.  Subtle variations in the wind will make a pretty big difference. 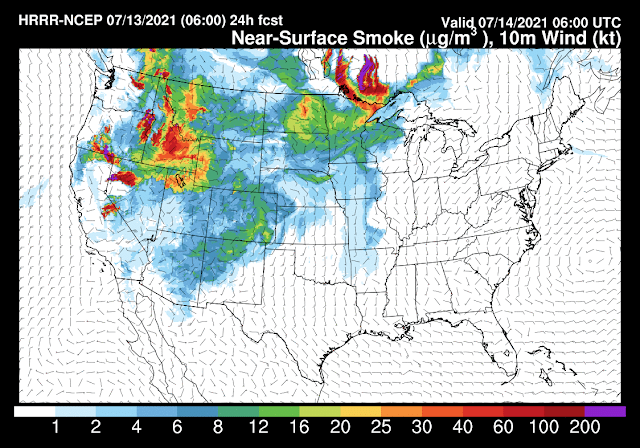