In the prior post, we examined the causes of the recent drought in southwest North America.  Here we take a look at the Great Salt Lake, a terminal lake with no outlet that fluctuates in elevation and area depending on the water balance of the Great Salt Lake Basin.

A news release issued by the USGS on July 16, 2021 indicates that the daily average lake elevation just prior to that news release was 2.4 inches above its historic low and that they expect water levels to continue to decline.  The historical trace from the USGS web site is below and shows current levels near the previous 1963 minimum, so we are certainly close. 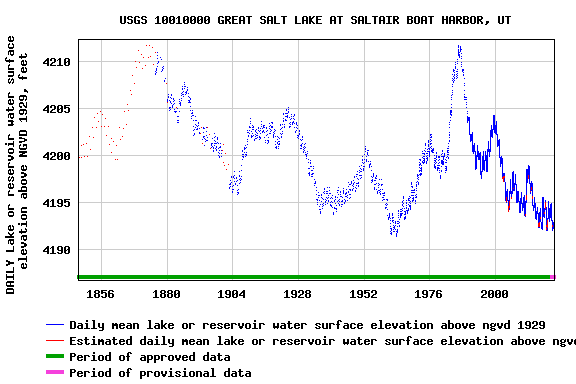 The Great Salt Lake is a remnant of Lake Bonneville.  Geologic evidence suggests that Lake Bonneville began to form 30,000 years ago and at its highest level was over 900 feet deep and covered almost 20,000 square miles.  Much of lowland western Utah was underwater.

Ah, the good old days.
Approximately 18,000 years ago, Lake Bonneville began to spill across what is known today as Red Rock Pass.  Eventually, water burst through the gap and the lake level dropped to what is known today as the Provo shoreline, still well above current lake levels.  However, the water balance shifted after this time and lake levels dropped, with Lake Bonneville reaching something near historical Great Salt Lake levels approximately 13,000 years ago.  A graph showing a reconstruction of lake levels is below, with time indicated based on thousands of radiocarbon years before present (i.e., 20 = approximately 20,000 years before present).
As indicated in the first graph in this post, records of Great Salt Lake elevation extend back to 1847 when Salt Lake City was settled by Mormon pioneers.  Since then, lake elevation has fluctuated from just under 4192 feet to just over 4211 feet.  These fluctuations also affect lake area and salinity.  Satellite imagery from yesterday well illustrates the current situation.  The lake is confined primarily to Gunnison and Gilbert Bays, the north and south arms of the lake, respectively.  The earthen railroad causeway limits mixing between these two bays, resulting in differences in salinity and halophilic bacteria that lead to the color contrast.  At historical high stand, the Great Salt Lake would cover virtually all of the lighter playa surrounding it.  Evidence suggests that during a prehistoric high around 1700 the lake also covered the playa area further west.
The primary inflows of water for the lake are precipitation directly onto the lake and inflows from the Bear, Weber, and Jordan rivers.  The flow in those three rivers is dominated by spring snowmelt, so wintertime precipitation is a primary driver of lake level. 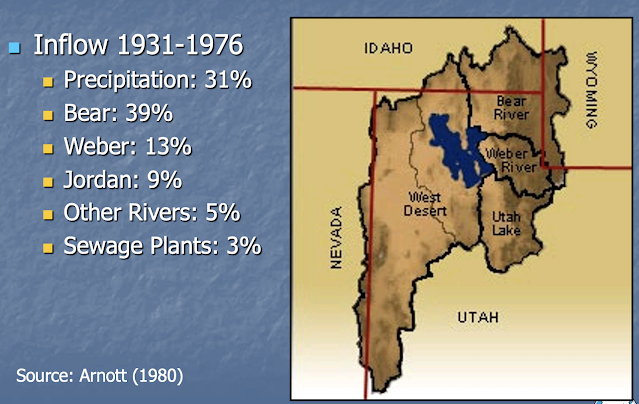 Since the Great Salt Lake has no outlet, the only way for water to "escape" is evaporation.  Thus, the lake level fluctuates based on differences between the above inflows and evaporation.
Since the mid 1800s, humans have altered the water balance of the Great Salt Lake directly and indirectly.  The direct effects are related to the capture and use of water along the Bear, Weber, and Jordan rivers for irrigation and other activities.  Indirect effects are associated with climate change.  Recent work led by Utah State University professor Wayne Wurtsbaugh suggests that water diversions since the 19th century have cumulatively lowered the elevation of the Great Salt Lake by approximately 11 feet.  Climate change affects the lake water balance by altering the snowpack, evapotranspiration of ground water in the drainage basin, and rate of evaporation from the lake surface.  These effects are expected to lead to lower average lake levels and may be contributing to recent declines.  I don't know of a study that has explicitly quantified this effect for the Great Salt Lake, although to date I suspect it is much smaller than that associated with water diversion.
We spoke in the prior post about the slow natural fluctuations in the southwest hydroclimate.  Such fluctuations are a wildcard for the short-term future of the Great Salt Lake.  A swing to a wetter period could temporarily increase lake levels.  A return to the 80s is quite unlikely as tree-ring records indicate that was a very anomalous period, but the lake's trajectory over say the next 10 to 20 years is going to depend a good deal on these slow climate fluctuations.  If drought persists, the Great Salt Lake will continue to whither.  If we swing back to a wetter period, some recovery may occur.
The long term future is less bright without intervention.  Continued water diversion and global warming will further accelerate the decline of the last remnant of Lake Bonneville, with associated collapses of ecosystems and other less desirable effects.
By Jim S Posted at 7/22/2021 09:50:00 AM