The Meteorology of Yesterday's I-15 Dust Storm

Tragedy struck yesterday in a major dust-storm induced crash in Millard County in which at least seven people have been killed and 20 vehicles were involved.  Video below provided by Emma Hahne and tweeted by Fox13 shows the visibility impairment in the area.

Video from I-15 this afternoon, near where a 20+ vehicle pileup happened in Millard County, shows how hard it was to see during the dust storm that passed through the area.

UHP believes this is what ultimately caused the crash with at least 6 dead. https://t.co/G6cy1lHhUR pic.twitter.com/npSAzH4Y2n

Some of the worst vehicle accidents in US history have occurred due to localized visibility restrictions along US interstates.  Perhaps not surprisingly, one of the easier summaries to access is provided by the personal injury attorneys Martin, Harding, & Mazzotti (https://www.1800law1010.com/the-worst-traffic-accidents-in-u-s-history/).  It provides a list of what they call noteworthy traffic accidents in US history.  Scroll down and you will see that dense fog, blowing dust, or sudden snowstorms are often contributors.

For example, on Nov 29, 1991, a massive pileup occurred in a dust storm along I-5 in California.  Quoting their web site:

"Due to a severe drought that year, many of the surrounding farmlands had been left unplanted.  The high winds whipped up the dry topsoil and created a dust storm that severely reduced visibility, leading to a series of crashes that became a 104-car pileup stretching over a mile of highway.  Rescue efforts continued for many hours, and 17 people died while 150 were seriously injured.   Several thousand moterists were trapped in their cars for most of the day as road crews worked to reopen the highway.  It remains one if the worst traffic accidents in California history."

Media reports indicate that the accident occurred between 4:30 and 5:00 PM MDT between Kanosh and Meadow.  Google Maps imagery, which would have been from the day of the accident, shows the region near I-15 consists primarily of farmland, with some areas of less intensively developed land near the base of the Pahvant Mountains to the east.
Radar imagery at 2228 UTC (04:28 MDT) shows some convection over the Pahvant Mountains to the east of Kanosh and Meadow ([Kanosh and Meadow are northeast of Milford (MLF in the image below), just north of the split of I-15 and I-70.
One possible mechanism for strong winds is outflow generated by these cells, which were moving to the southwest. MesoWest observatins within 1 hour ending at 23:30 UTC show easterly surface winds in the Kanosh and Meadow area.
Observations from a portable Road Weather Information System site along I-15 at the southernmost exit for Kanosh showed an increase in wind speed after about 2030 UTC (2:30 PM MDT), with a maximum wind gust of 36.2 mph at 2310 UTC (5:10 PM MDT), very close to the time of the pileup. Temperatures were also declining a few degrees during this period, although there was no abrupt drop in temperature or wind speed as occurs if the outflow featured a sharp gust front.  The wind direction during the period of peak winds was E-ESE. 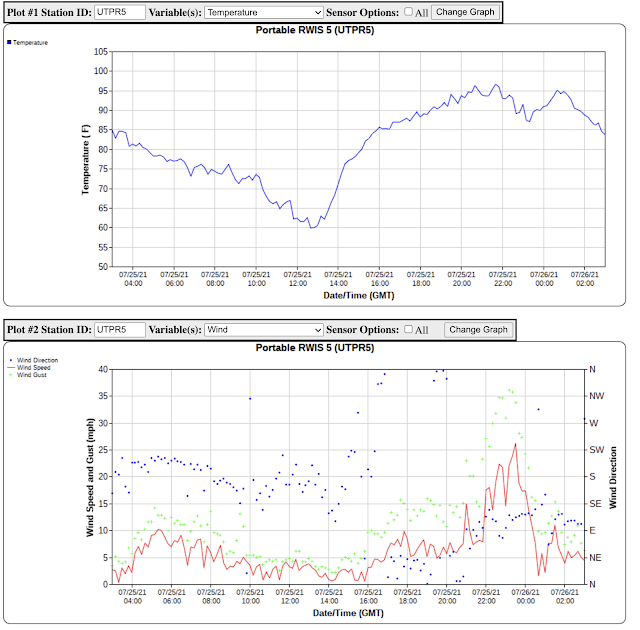 To summarize, blowing dust and reduced visibility appeared to contribute to a major accident along I-15 at around 4:30 PM MDT yesterday afternoon.  Meteorological observations suggest that the flow at the time was easterly to east-south easterly and may have been strengthened by outflow from convective showers over the Pahvant Range.  The closest observing site to the crash site (UTPR5 above, about 5-10 miles from the crash site depending on precisely where the crash occurred) showed wind gusts over 30 mph beginning around 2200 UTC (4:00 PM MDT) and peaking at 36.2 mph at 2310 UTC (5:10 PM MDT).
These are not exceptional winds or all that unusual during summer convective storms over Utah.  Questions remaining to be answered concerns the land-surface conditions east of I-15, whether or not they were conducive for major dust emissions at the wind speeds observed above, and whether or not the flow may have been stronger at the crash site (clever photogrammetry using videos might enable a better estimate).  In either event, I suspect that the dust source was from the region between I-15 and the Pahvant range and very likely could have been farmlands close to I-15.
Addendum @ 10:45 AM
Drone footage from UHP is also consistent with local dust source.  In the tweet below, I compare their drone photo with one from Google StreetView showing dramatic land-use disturbance immediately to the east of I-15.