Storm 1 is in the bag.  Total snowfall at Alta-Collins was 9-11 inches depending on how you read the automated depth sensors.  The resort is reporting 11", which is consistent with measurements collected on the interval board, which reached 5" at 1700 MST, when the board was wiped, and then peaked again at 6" at 2200 MST.

Most of the snow that fell during the day yesterday was associated with the front.  From about 1700-2200 MST, post-frontal pixie dust fell with a water content of only 3.5%, adding up to 6" of snow with only .21" of water.  Good for chin ticklers and face shots, although our priority right now should be base.  During this period of bone-dry snow radar imagery showed the strongest echoes confined to over the central Wasatch west of the Wasatch crest.

The overnight post-frontal period was largely quiet, although a little lake and possibly playa effect got going toward morning (more on this in a minute).  If you follow the deterministic models like the GFS, NAM, and Euro, a few days ago they were advertising a moist post-frontal flow and lake effect.  An example is below.

A few years ago we examined the average error produced by 24-hour NAM forecasts for potential lake-effect events.  Although 700-mb (10,000 ft) temperature errors were small (averaging 1.1˚C), the average error in low-level relative humidity was 12% and during some potential events was as large as 25%.  This, combined with the fact that wind direction cannot be precisely forecast, contributes to forecast uncertainty during the post-frontal crapshoot.

Overnight we did get some lake effect going, but it was weak and due to the northerly flow was confined to over and near the Oquirrh Mountains.

The radar also illustrates some weak cells over the west desert.  This may be "playa effect".  The playa in that area is quite wet and is often warmer than the surrounding desert shrubland at night.  If the GFS analysis above is correct, the ambient relative humidity in that area may have been higher than over the lake, perhaps enabling the convection to develop over the warm playa, whereas it was weaker over and downstream of the lake.

Today is a transition day before the next storm.  An explosively deepening cyclone is now forming off the Pacific Northwest coast.  Take the time to look at satellite animation as the beast below wraps up during the day today.  As I type this, the cyclone is in the early stages of rapid cyclogenesis with a pronouced dry slot beginning to form and create the classic "comma" shaped cloud mass at 0721 MST/1421 UTC).  I anticipate that we will see this wrap up into a spiral cloud pattern in the next few hours.

This storm is no joke.  The National Weather Service has issued hurricane force wind warnings for the offshore waters and has pretty much issued just about every non-convective warning that exists for near coast areas of northwest California and Oregon.  Subsequent impacts associated with the evolving weather pattern over the next few days has led to a plethora of advisories, watches, and warnings for much of the western contiguous United States.


The upper-level trough and surface cyclone stall over the western United States Wednesday and Thursday before progressing inland Friday and Saturday.  On Wednesday, the moisture plume ahead of the cyclone will begin to penetrate inland (green arrow below).  This plume of moisture reflects its source in a vapor rich atmospheric river off the southern California coast and a pathway around the southern high Sierra, which leads to less water vapor depletion due to orographic precipitation enhancement. 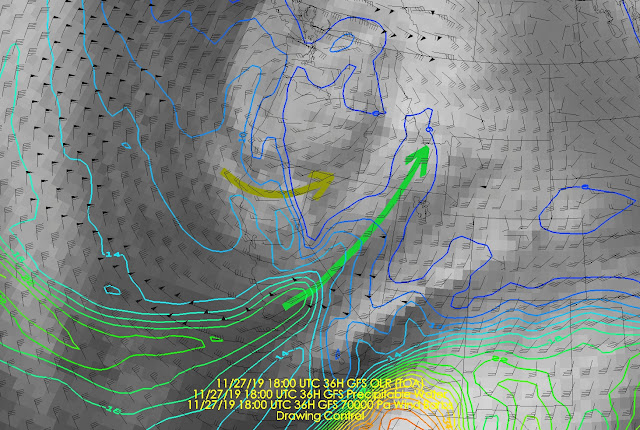 The models are advertising heavy precipitation near and along this moisture plume, as illustrated below (especially the lower right panel) by the GFS forecast valid 1400 MST/2100 UTC Wednesday.

Fundamentally, the location of this plume and associated precipitation will be critical for precipitation totals in the Wasatch (and elsewhere in Utah) on Wednesday and even Wednesday night.  The GFS, for example, actually shunts the northern portion of the band back toward the west by Wednesday evening, which might lead to a break in the action for the central Wasatch before the front goes through.

Then, further out, the GFS calls for a new cyclone to form over southeastern Utah, which would yield easterly flow over the Wasatch.

The NAM, however, has a somewhat different solution without such a strong cyclone.

I am not endorsing any of these forecast specifically, but I am showing them merely to highlight that the pattern is very complex during this period and the timing and intensity of precipitation locally is going to depend strongly on the flow evolution.

Which brings us to the downscaled SREF.  Mean precipitation and snowfall produced by the 26 SREF members at Alta through 0000 UTC 30 Nov (1700 MST Friday) are about 2.4" and 40" respectively.  Wooha!  However, the spread is enormous, with one member producing less than 0.5" of water and 8" of snow and another generating almost 4" of water and 65" of snow.

I think this is about as much spread as I've seen from the SREF for Alta.  That being said, over 90% of the members are generating over an inch of water and 20" of snow.  Thus, it is very likely that we're going to see significant accumulations from Wednesday to the end of Friday, with the main questions being timing and whether or not placement of the various pieces of the system is right to be in the middle to upper end of the SREF forecast.  No matter what, I think winter is on once again and my friends in the snow-safety community should be on alert.
By Jim S Posted at 11/26/2019 08:27:00 AM