When the Canadian Goes Off

Users of this forecast guidance and readers of this blog are likely aware that one or more members of the downscaled Canadian ensemble occasionally produce extreme and sometimes non-physical precipitation accumulations (water equivalent and snowfall).  One of the more extreme examples occurred last night when one of the downscaled Canadian ensemble forecasts generated 8 inches of water and nearly 140 inches of snow for Alta, including an unrealistically large 5 inches of water and 80 inches of snow in about 24 hours (Canadian ensemble members below labeled as CMCE members in the left hand graphs).

Why is this happening?

There are 21 members of the Canadian Ensemble in the NAEFS, including a "control" run and 20 members with either perturbed initial conditions or differing physical parameterizations.

Below are thumbnails of the 12-hour accumulated precipitation from each member of the forecast highlighted above for the period ending 1200 UTC 27 November, which I obtained from https://weather.gc.ca/ensemble/.  This 12-hour period includes the very heavy accumulation forecast for Alta.  The outlier is ensemble member 11, labeled GEM11 below.  This member produces a localized precipitation maximum over northern Utah, as well as two other spots to the west over northern California and Nevada.  The web site I obtained these plots from does not include a color scale, but it appears the blue shading corresponds to values > 25 mm (about an inch). 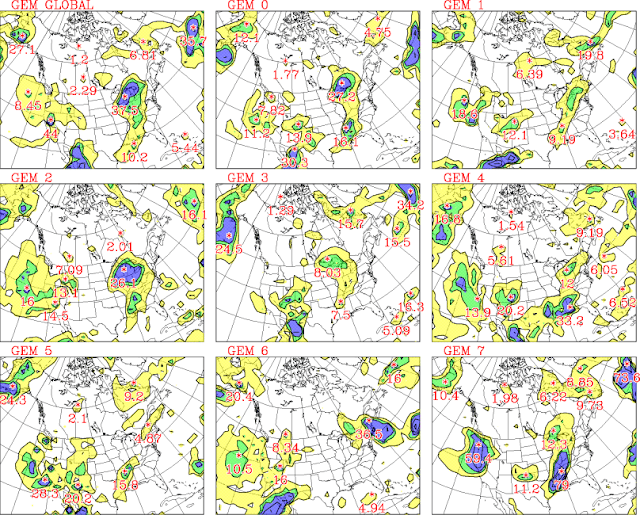 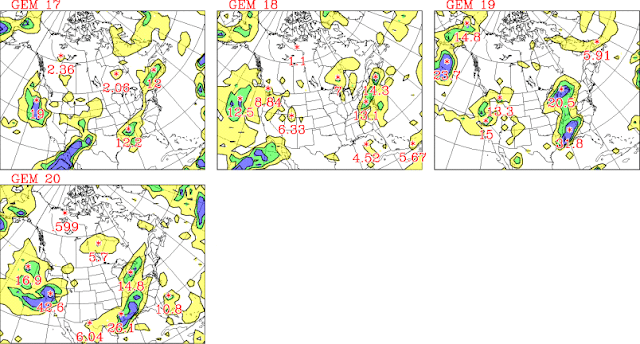 A look at member 11's forecast elsewhere shows some localized precipitation maxima elsewhere, including over the Atlantic near the edge of the plotted region.  These intense, localized precipitation maxima are sometimes referred to as grid-point storms.  It could be that member 11 (and perhaps some other members) has a configuration that is prone to producing such behavior.

So, it is my hypothesis that these big precip maxima are being produced by these heavy localized accumulations.  We have seen this sort of behavior in some other modeling systems (e.g., West et al. 2007), but further work is needed to understand what is happening in the Canadian ensemble.

The GEFS does not seem prone to this type of behavior.  Further, we have done extensive verification of the GEFS before and after downscaling.  Those who use these products, have a strong stomach, and would like to know more about the capabilities and limitations of the GEFS-portion of the downscaled NAEFS ensemble can learn more from Lewis et al. (2017).
By Jim S Posted at 11/22/2019 03:28:00 PM