We are now deep into mid August and thus far the 2019 monsoon has been a bust for precipitation across much of the southwest U.S., including Utah.

Precipitation for the 60-day period ending 18 August is at or below average across much of Arizona, Utah, Nevada, and Southern California.  Much of Texas is similarly below average, with only New Mexico having something close to or above average. 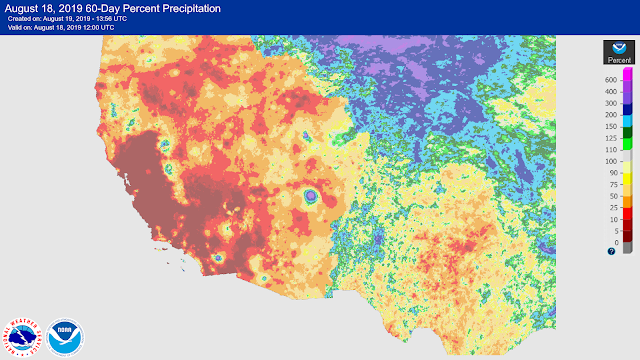 This past weekend we were in Phoenix helping my daughter move in for her 2nd year at Arizona State.  The high on Friday afternoon when we arrived was 111ºF, followed by 108˚F on her Saturday move-in day.  Brutally hot, with not much in sight but one thin, distant rain shaft on Friday afternoon.

Although one might hope that in August we'd see a greater likelihood of precipitation compared to July, climate is what you expect and weather is what you get.  The challenge we are currently having in Utah is one in which the mid-latitude westerlies are just far enough south to keep us in a dry airstream, but not far enough south to get us into cooler-than-average air, as illustrated by the GFS 4-day forecast loop below.  The monsoon precipitation (green and blue color fill) remains predominantly east and south of Utah.

Although I would not rule out the chance of a shower or thunderstorm over the mountains during this period, the coverage and intensity of precipitation is limited.  We just don't have a circulation right now that favors the transport of monsoon moisture into the state.  Hence, dry conditions will predominate through at least the work week.
By Jim S Posted at 8/19/2019 08:52:00 AM