To Piste or Off Piste, That Is the Question

An article last week in The Telegraph explored some of the confusion that exists about "itinerary" ski runs in Europe and highlights many of the ambiguities and contrasts that exist concerning controlled vs. non-controlled terrain at ski resorts in Europe.

Until I saw the article, I'd never heard the term "itinerary" ski run before, which highlights some of the cultural challenges that exist when skiing in a new region where approaches to resort avalanche hazard may vary.  Essentially, itinerary runs are typically ungroomed routes.  For example, freeride-verbier.com states that itinerary ski runs in the Swiss Alps are designated off-piste routes and marked on the ski map, but they are not maintained or controlled (see link).  They are indicated with yellow lines on a piste map.

The culture and approach to avalanche "control" (I put that in highlights because the white beast is never truly controlled) at resorts varies internationally and in some cases within countries.  In the United States extensive extensive efforts are undertaken to reduce avalanche hazard and provide access to avalanche terrain.  This leads to an environment where little thought is given by in bounds skiers concerning avalanche hazard.  Indeed, the avalanche hazard in open in-bounds terrain is quite low, although it isn't zero.  On average, about one avalanche fatality per year occurs in terrain that has been opened by the ski patrol at U.S. ski areas.

In Europe, the story is different.  Control work focuses on pistes, marked ski runs, and not in the extensive off-piste terrain.  Don't expect a rope line or sign to tell you when you are going into avalanche terrain.  You might find a sign here or there, but you might not.

In Austria, some resorts include "routes" on their piste maps, typically with dashed lines.  For example, the "14" ski route at Stubai Glacier is marked with a dashed line and is called a ski route on the map, in contrast to the ski pistes denoted with solid lines.  It is, however, sometimes groomed.  The route itself is intermediate, but traverses avalanche terrain.

Although control work is done, the hazard along European pistes is reduced but not nonexistent if they are in avalanche terrain.  Below is a slide that hit the piste at Hintertuxer Glacier while it was open for skiing in May. 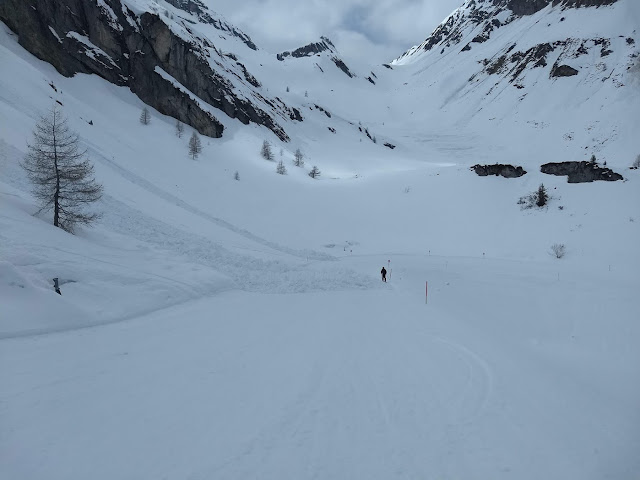 If you are skiing in Europe, it is best to assume that off piste is de facto backcountry.  Further, do not assume that skiers and tracks off piste imply "safe" conditions.   In January 2015, an off-piste avalanche in Sölden, Austria took the lives of US Ski Team racers Bryce Astle and Ronnie Berlack.  Off Piste: Tragedy in the Alps is based on their tragedy and worth watching to raise awareness of avalanche safety.

Off Piste: Tragedy in the Alps from BRASS Foundation on Vimeo.