If you've lived in Utah long enough, you know that a "perfect" weather day in July or August isn't sunny, but instead cloudy with rain or at least rain showers.  Today nails it as far as I'm concerned.

As of 2:30 PM MDT, we've had predominantly cloudy skies all day with some showers and some drippy rain at times.  Temperatures overnight were warm and the overnight minimum was only 69ºF, but after a warm start to the morning with temperatures in the mid 70s, rain moved in and dropped the temperatures to as low as the mid 60s at about 1 PM.  At 2:20 it was 71ºF with a dewpoint of 62ºF.  PERFECT


Really, on the regional scale, the airmass we're presently in isn't all that cool.  Move south and you'll find an 88ºF in Milford or north for an 82˚F in Dubois.  Thank the well timed showers for the natural air conditioning today.

And, as I like to say, things are going to get interesting later today.  The band of showers that came this morning and early afternoon is exiting to the north and a nice clear slot is opening up over northwest Utah.  Further upstream and just beginning to move across the boarder are some stronger storms.

Lightningmaps.org shows that the stronger cells are producing lightning. 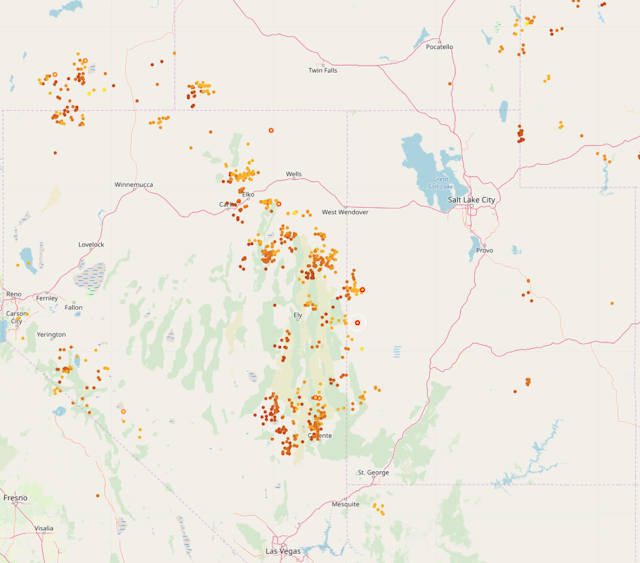 So, speaking like a meteorologist, if we're lucky, we'll get some action later this afternoon and this evening as the sun juices things up.  Keep your fingers crossed.
By Jim S Posted at 8/08/2019 02:44:00 PM