Convection over the Uintas

During periods of weak large-scale forcing in the summer, the mountains play an important role in the initiation of convective clouds and thunderstorms.  Nowhere is this more apparent in our region than over the Uinta Mountains where a visit sometimes makes one feel like they've traveled to another planet.

The photo below was taken from the Gobblers Knob summit at about 10 AM this morning looking east toward the Uintas.  As is often the case, one can see the first cumulus clouds of the day forming over the Uintas.  Often, these clouds grow in depth, producing showers or thunderstorms later in the day. 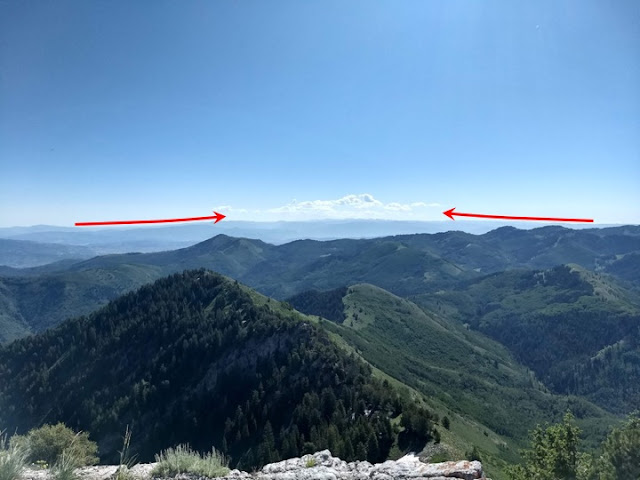 I don't know of a study that has specifically examined the influence of the Uintas on convective cloud initiation and evolution, as well as growth into thunderstorms, but I'll speculate here on one of the reasons why the Uintas are so active: their scale.  They are quite high and broad with large expanses of lower elevation terrain to the north and south of their west-to-east oriented spine.  This favors the development of a robust "mountain-plain circulation" which during the day features upslope flow with convergence over the Uintas, as depicted schematically above.  This convergence leads to ascent, which not only helps to trigger cumulus clouds, but also creates a moist environment in which those clouds are not as easily destroyed as they mix with the ambient air through a process known as entrainment.

Constrasts between the evolution of convection today over the Wasatch and Uintas are apparent in MODIS imagery from NASA's Terra and Aqua satellites.  The Terra overpass at approximately 11:30 MDT shows extensive cumulus clouds over the Uintas.  In contrast, cumulus over the Wasatch was confined primarily to the central Wasatch, especially the high terrain between Snyderville Basin and Alta.

The Aqua overpass at 2:30, shows that the convective clouds became much deeper over the Uintas than the Wasatch.  Note the extensive and continuous anvil associated with a storm over the central and eastern Uintas in the image below, with a cloud free area near the Uinta crest to the east, likely associated with a local cold pool in its wake.

Radar coverage in the Uintas is so-so at best, but imagery at the time shows a that precipitaiton was likely falling in the Kings Peak area.

It's best not to assume that the forecast you hear on TV applies to the Uintas.  It's a better option to check the National Weather Service site for a Uinta-specific forecast and take low probabilities of thunderstorms seriously.  Review National Weather Service recommendations for backcountry lightning safety at https://www.weather.gov/media/safety/backcountry_lightning.pdf.
By Jim S Posted at 7/21/2019 06:31:00 PM