A Pleasant 4th for Some, but Not Others

The large-scale weather pattern over the Northern Hemisphere over the past 10 days (maybe longer but I haven't looked) has featured a high-amplitude flow pattern that one might describe as "wavy."  The slowly evolving nature of this pattern has resulted in persistent ridging over Alaska and the Gulf of Alaska and troughing over the western continental United States and adjoining eastern Pacific.

The situation in northern Utah on the 4th of July was further influenced by a short-wave trough (dashed line below in the analysis for 0000 UTC 5 July/1800 MST 4 July). 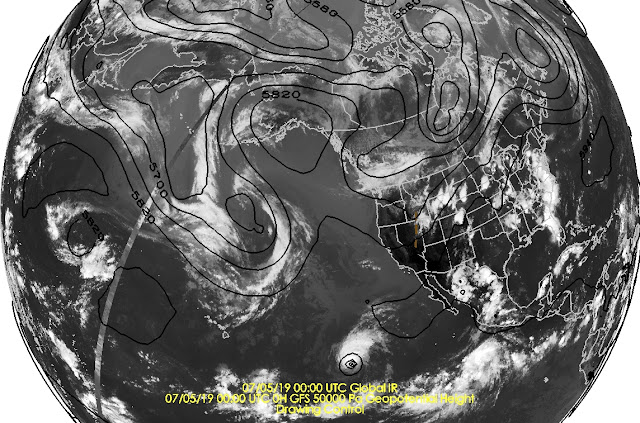 This led to the development of afternoon showers and thunderstorms that led, in my view, to an incredibly pleasant 4th of July, although admittedly some picnics and outside plans were doused.  Given my disdain for summer heat, that's a tradeoff I'm happy to make.  Looking at the numbers, yesterday's high of 83 and daily mean temperature of 71.5 were the lowest on the 4th of July since 2010 when we only reached 78 for a maximum and the daily mean was 57.  Prior to that, one needs to go back to 1995 to find something cooler.

Not everyone is enjoying this pattern, however.  All-time maximum temperature records were set at several locations in southern Alaska, including Anchorage, which reached 90ºF, breaking their previous record by a remarkable 5ºF.

Interior Alaska can get hotter than that (Fairbanks record is 99 and the state-wide record is 100 in Fort Yukon), but these are exceptional numbers for the Anchorage area and make for sweaty feet in the Xtratuf fishing boots.
By Jim S Posted at 7/05/2019 07:57:00 AM