The climatologically hottest week of the year begins today.

There is a 7-day stretch from 23-29 July during which each day the average temperature is 80˚F at the Salt Lake City airport, the warmest of the year.

Call it hump week.  After this, we are on the downward slope to winter!

It's worth a look back at the summer so far.  We've done this once or twice already, but let's dig a little deeper.

The period from 1 June - 22 July ranks as the 4th warmest on record based on average temperature.  Technically, we are tied for 4th with 2007.

However, for minimum temperature the period is the 4th warmest on record behind only, drumroll please, the three previous years (2017, 2016, and 2015).

We also had a 13 day run from 5-17 July during which the temperature did not drop below 70˚F.  That represents the 2nd longest streak on record (tied with periods during July 2007 and 2013), but lies short of the 22 day run we experienced last year.

In case you are wondering, the warmest day of the year exhibits significant geographic variability.  The earliest is in extreme western Texas, New Mexico, and Arizona where temperatures peak in June or early July and temperatures later in the summer are damped by the monsoon.  Northern Utah and the greater northwestern U.S. with the exception of coastal areas, sees an average warmest day of the year in late June or early August.  Locations along the Pacific Coast have a much later maximum, some in September, since it is very difficult to get warm, offshore flow at those locales in June and July. 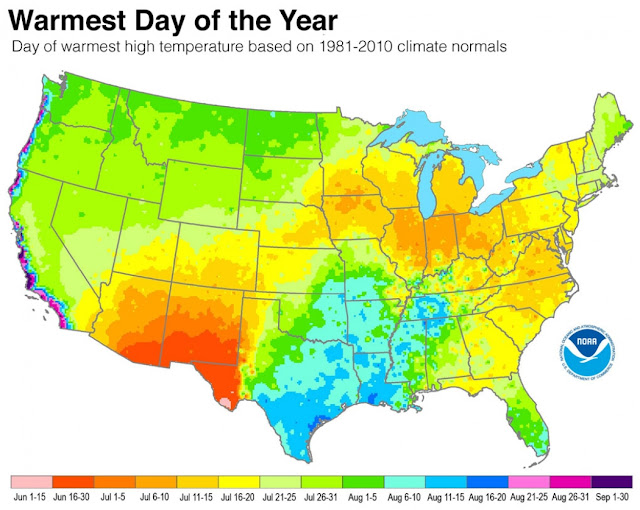 If you wish to extend your misery, consider a trip to the Gulf Coast of Texas and Louisiana where the average warmest day of the year is in mid to late August and you can double down the heat with brutal humidity.
By Jim S Posted at 7/23/2018 07:59:00 AM