So far this month, the Salt Lake Valley has escaped the smoke, but that all changed overnight and residents awoke this morning to a smoky scene. 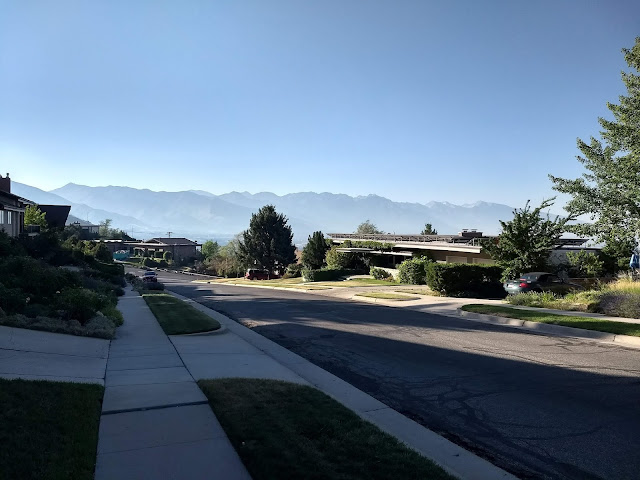 Yes indeed, the smell of campfire is in the air, sadly without the smores.

This is an educated guess based on the HRRR-Smoke and regional analyses, but I suspect this smoke is from origins to the south, including the West Valley Fire north of St. George, rather than the Dollar Ridge Fire to the east or the Hogan Fire to the west.  With more digging, perhaps one of you can nail it down for me.

Regardless, the PM2.5 levels in the Salt Lake Valley have risen.  The trace from Hawthorne Elementary tells the tale.  Of course, the worst air quality of the past 5 days occurred at 11 PM on the 4th of July when PM2.5 peaked at 64.7 ug/m3, which is at unhealthy levels.  The joys of fireworks.
After a recovery yesterday, however, the smoke moved in after about 10 PM last night, with PM2.5 levels thereafter hovering just over 40 ug/m3, which is unhealthy for sensitive groups.

The Purple Air network appears to have a good handle on this event and its spatial structure.  PM2.5 at about 8:40 AM this morning appeared to be highest along the east bench and lowest in the West Valley.  If one peaks along the screenshot bottom, you can find the highest values in Utah County. 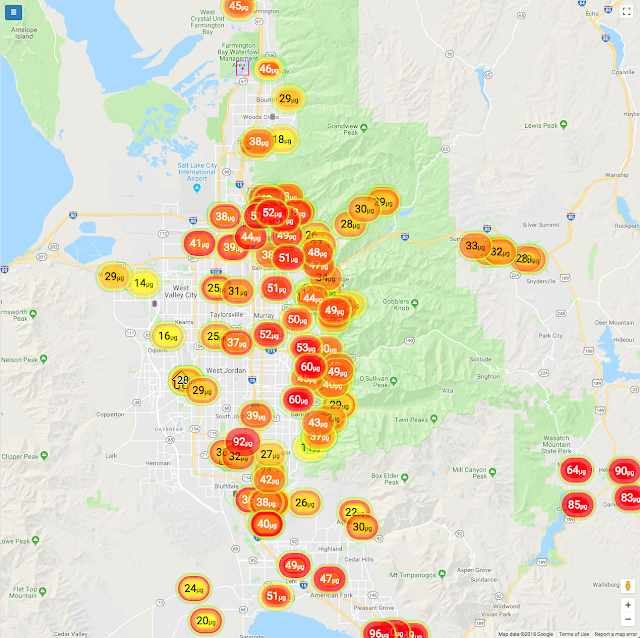 In fact, one can find some stations down there with values at the upper-end unhealthy levels.  Such variability is not uncommon with smoke plumes.

The NWS forecast high for this afternoon at the Salt Lake City International Airport is 102˚F.  If there was no smoke, we would expect the combination of a high-angle July sun, high temperatures, and the usual urban pollution to lead to high ozone.  This has happened consistently the past 5 days, with the highest values reaching unhealthy for sensitive groups yesterday afternoon.

Ozone is produced by photochemical reactions that occur in sunlight between pollution and naturally occurring gasses in the atmosphere.  This is one reason why ozone typically peaks in the afternoon (give or take a few hours).  The chemicals in wildfire smoke typically up the ante and lead to more elevated ozone levels.  We will probably see ozone levels in the unhealthy for sensitive groups level this afternoon, but higher values are possible and could combine with elevated PM2.5, if the smoke lingers.

I realized after posting this article that the term "campfire weather" in the title might be misconstrued to suggest that it's a good time to have a fire.  That is definitely NOT the case.  In this instance, it simply means that it smells like a campfire.

DAQ reporting smoke may be from Dollar Ridge Fire and there are some winds in surface mesonet data over the region with an easterly component.  Thus, my gut on this could be wrong.  Comments from sleuthing types out there appreciated as I need to get some work done...
By Jim S Posted at 7/06/2018 09:03:00 AM