We have a bit of moisture coming into Utah for the first part of the work week, which I suspect everyone will be glad to see.

The situation this morning features a complex trough off the Pacific coast with a broad region of moist air with high precipitable water (color contours) affecting the entire California coast.


By 0600 UTC 9 January (11 PM MST Tonight), the coplex trough is broken into two pieces, one moving over the Pacific Northwest coast, the other approaching California.  Northern Utah is under the influence of bands of moisture moving into the western interior in the southwest flow.

That situation persists overnight and for much of the day tomorrow as the two troughs move inland and the 700-mb flow over northern Utah gradually veers (turns clockwise).

Then, late Tuesday night and early Wednesday morning, the northern trough and accompanying cold front push into northern Utah and the flow switches to northwesterly.

So, this will essentially be a three-part storm.  The first part will feature the southwesterly flow and precipitation in waves for the mountains.  The second part is the frontal passage late Tuesday night or early Wednesday.  The third part is the post-frontal period thereafter.  These stages are evident in the NAM time-height section below (remember time increases to the left in this plot — more on how to interpret these diagrams here). 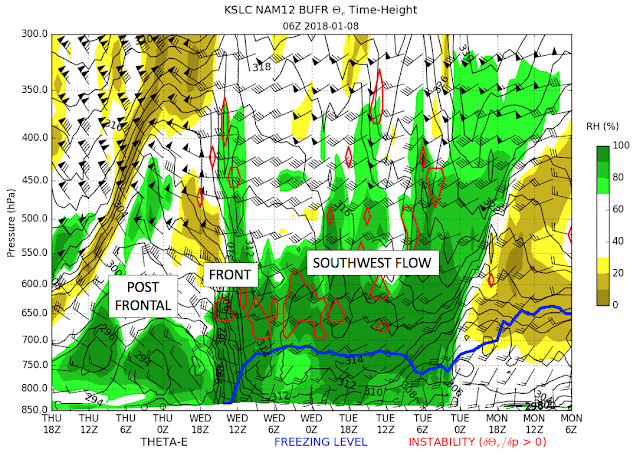 The blue line in the plot above is the freezing level, which looks to be fairly high during the southwest flow portion of the event.  The freezing level should not be confused with the snow level as those are two different things.  The freezing level is the latitude at which the temperature is 0ºC, but the snow level is below this level.  How far depends on how temperatures change with height in the atmosphere, the relative humidity, and other factors.  Complicating the snow level forecast for the southwesterly flow period is the cold, dry air currently in place in the valleys.  That could help keep the snow level low initially, but it will eventually warm enough that we will be looking at snow levels between 6500 and 8000 feet until the front approaches Tuesday night.  Snow levels will drop with the frontal passage.

The 0600 UTC NAM generates 1.1 inches of water equivalent at Alta Collins from 7PM tonight through 9 AM Wednesday morning.  Nearly all of that precipitation falls in the southwesterly flow and front periods, with little post-frontal.  Downscaled SREF plumes for Alta Collins show anywhere from about 0.75" to nearly 3" of water.  There is strong clustering by the model used, with the NMB members producing less precipitation in general than the ARW members, which is typical.  A few members to for some significant post-frontal precipitation.

Looking at things spatially, the downscaled SREF shows high (>90% probability) of 1" or more of water at most high elevations in the Wasatch Range.  Higher elevations regions that typically do well in southwesterly flow, including Ben Lomond, Snowbasin, and Timpanogos Peak have > 80% chance of 2" of water.   Most of this precipitation falls through Wednesday morning, although there are a few members that get higher precipitation totals due to precipitation Wednesday or Wednesday night.  Thus, if you want odds through Wednesday morning, cut those numbers a bit.

By and large, this looks like a decent wet storm for the high elevations, with high density snow at times tonight through Tuesday night, and snow levels (and snow densities) dropping late Tuesday night or early Wednesday morning with the frontal passage.  Mid elevations will depend on snow levels.  The base of Snowbasin and Park City for example, could see rain at times during the southwesterly flow period.

I was going to say "tip of the week is to call in sick Wednesday morning" as the right-side up nature of the snowfall should make for great turns in the upper elevations, but the red light will be on for backcountry skiing on or below steep terrain.  At the resorts, keep your friendly ski patrollers happy as they will have their work cut out for them Wednesday morning.
By Jim S Posted at 1/08/2018 08:49:00 AM