Today marks the last day of holiday break at the University of Utah with classes starting tomorrow.

For the last day of break, the skiing at Alta today was just fine.  It is quite remarkable what a few inches of right-side up snow can do.  Plenty rocky and bony off piste, but the groomers were fine and the weather was as nice as it can get in early January.  I have friends who like to say "if you can't ski good, ski fast," so that's what we did. 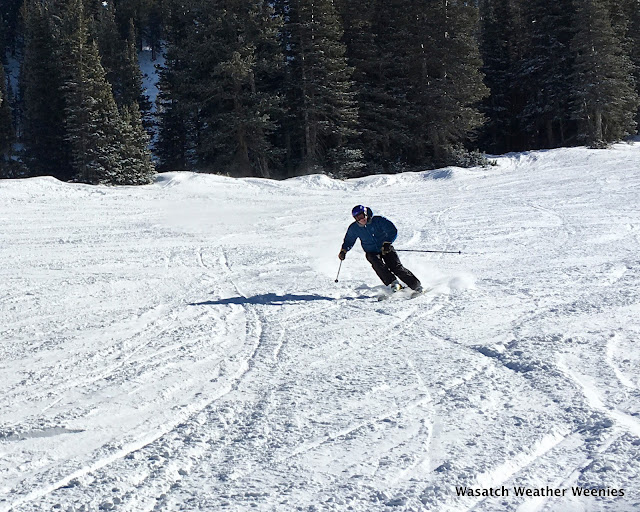 With beautiful clear skies in place, I could have taken a photo of the valley fog or pollution for the weather lesson of the day, but like you, I'm sick of it.  Instead, here are some wimpy cumulus clouds that formed over the south-facing wall of Little Cottonwood Canyon where it is likely that surface heating was driving upslope flow. 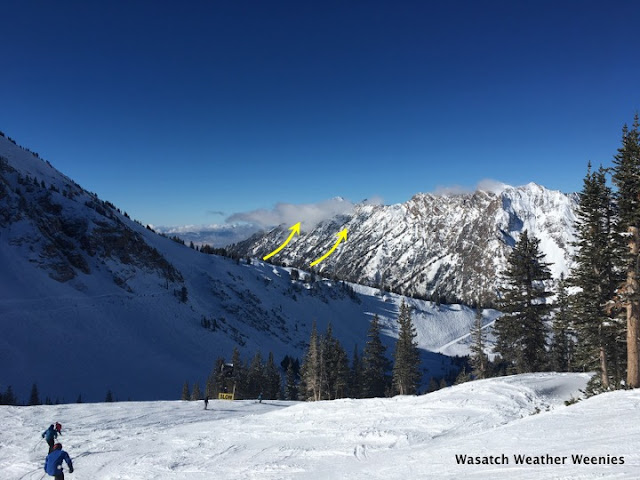 The low sun angle this time of year can sometimes drive a cross-canyon flow as the north-facing side of the canyon remains in the shade, whereas the south-facing side is heated.  Just one thing to look for on days when the large-scale flow is weak and skies are clear.

I took a quick look at the SNOTEL data today and noticed Snowbird has the lowest snowpack water equivalent in the 29-year history of the site.  Data does not extend back to the 76-77 drought season, but I suspect that season will still beat us for worst year on record.  Basically, we're about a month behind, as the 7.2" of water at that site today is the median in the 29-year record on 7 December.  This year, January is the new December.   Let's hope February isn't the new December too.

Given the limited snow, hats off to the snowmakers and the groomers for their efforts during the holiday break.  I resort skied twice during the holidays and both times conditions were better than expectations.  I did quite a bit of nordic skiing and found conditions at Mountain Dell and Jeremy Ranch to be quite fun.  By and large, it was a good break.  Meteorologically, the big cyclone event also served up a great case for new material for my class this semester.  Students had better be ready!
By Jim S Posted at 1/07/2018 02:44:00 PM