A Primer on Sea-Effect Snows of Japan

The driver of all this snowfall is the so-called Asian Winter Monsoon, which is characterized by a cold, northwesterly flow from Asia over the Sea of Japan.  This produces copious sea-effect snowfall that inundates northwest Honshu and Western Hokkaido Islands.

The snowfall accumulation is relatively punctuated, but incredibly intense.  Compare, for example, the average monthly snowfall at Kutchan, a Japanese Meteorological Agency observing site near the base of Hokkaido's Niseko resorts to that at Alta.  Alta features a broad peak from December through March (the minimum in February largely reflects the smaller number of days), whereas Kutchan features a pronounced maximum, exceeding 140 inches, in January. 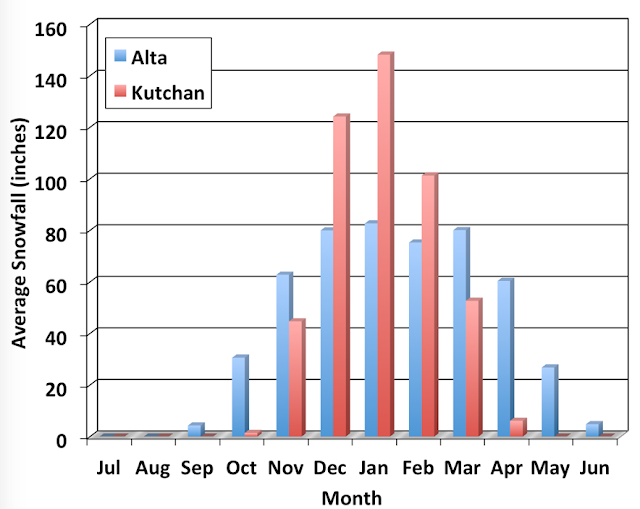 The Japanese Meteorological Agency observing site at Sakayu Onsen, in the Hakkoda Mountains south of Aomori averages 181 inches of snow in the month of January and 695 inches a year and may be the snowiest regular observing site in the world.  This is why I say that there is no surer bet for deep powder skiing anywhere in the world than in the mountains near the western coasts of northern Honshu and Hokkaido Islands in January.

The Sea-Effect machine is currently raging in Japan and the satellite imagery is marvelous.  One can see the two primary modes of sea-effect snowbands in the modis imagery from yesterday.  The first are longitudinal mode bands (or "L-mode"), which are oriented roughly parallel to the low-level wind.  The second are transversal mode bands (or "T-mode"), which are oriented roughly perpendicular (or across) the low-level wind.  Upstream coastal geometry and coastal geometry often affect the initiation of the L-mode bands.   It is curious that both types can be observed simultaneously over the Sea of Japan for reasons that perhaps we will discuss sometime in the future. 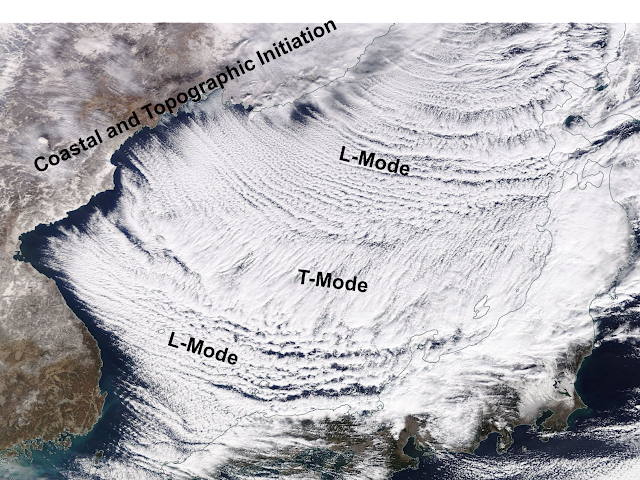 As I often like to say when it comes to sea- and lake-effect precipitation, "there are a lot of critters in the woods."  L-mode and T-mode bands aren't the only sea-effect features observed during the winter monsoon.  There can be areas of larger-scale convergence, such as the Japan Sea Convergence Zone that affects Honshu and convergence zones that form downstream of the Sikhote-Alin Mountains of eastern Russia that affect Hokkaido.

What happens to these sea-effect snowstorms as they approach and interact with the coast and topography of Japan depends on a number of factors.  There are events that sometimes produce heavier snowfall in the coastal lowlands, for example, rather than in the mountains, which is more common.  In a classic study on ice crystals and sea-effect snowfall at Hokkaido University, Magono et al. (1966) referred to storms with heavier lowland snowfall as "Satoyuki" type and heavier mountain snowfall as "Yamayuki" type.  Their conceptual model for Satoyuki-type storms is below, and features a strong inversion layer near mountain top that likely prevents the flow from surmounting the barrier.
With support from the National Science Foundation, we have been working with researchers at the Snow and Ice Research Center in Nagaoka, which is part of Japan's National Research Institute for Earth Science and Disaster Resilience, as well as scientists at the University of Hokkaido, to better understand the processes affecting the distribution and intensity of snowfall along the Japanese coast and inland mountains.

We have one paper currently in review that examines the transformation of T-mode bands as they interact with the Shakotan Peninsula of Hokkaido Island, generating a region of more persistent and intense precipitation over the Ishikari Plain, which includes the city of Sapporo.

We have also been using the Japanese radar network and space-borne cloud radars to examine sea-effect storms over the Sea of Japan and their interaction with Honshu, focusing on the area around Nagaoka.

I have had to good fortune to travel to Japan twice, the first for the 1998 Olympic Winter Games and the second to meet with scientists in Nagaoka.  I consider both trips to be career and personal highlights.  It is worth going over for more than just skiing.  Seeing how the Japanese deal with such prolific snowfall is quite interesting.  In Nagaoka, for example, much of the snow falls at temperatures at or just above 0ºC.  Warm water is sprayed on the roads to melt the snow, which then flows through the cities water system. 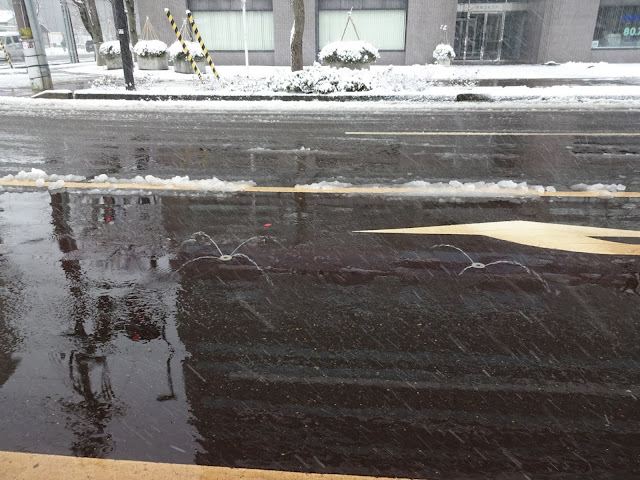 Here's an example of another warm-water-based snow removal system at the Snow and Ice Research Center. 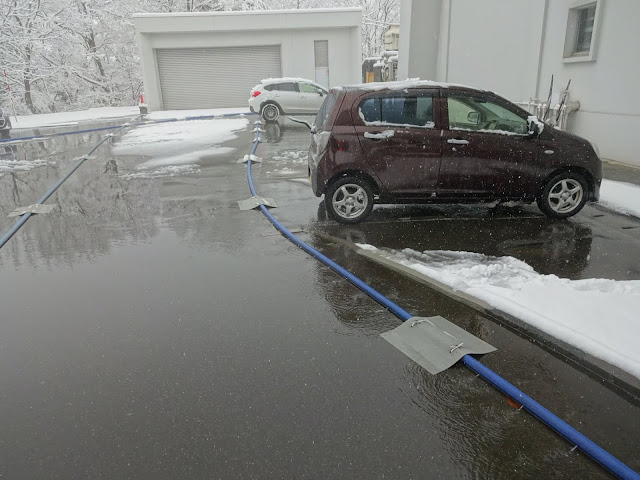 Then of course there is the skiing.  Japan is often described as deep, not steep, and indeed you can find plenty of low-angle powder skiing there.  However, there is also some incredible terrain for backcountry skiing.  A challenge is finding an opening with good weather and stable snow.  We were fortunate to get some on last year's trip.  Below one of my graduate students, Peter Veals, gets the goods in the backcountry of the Hida Mountains. 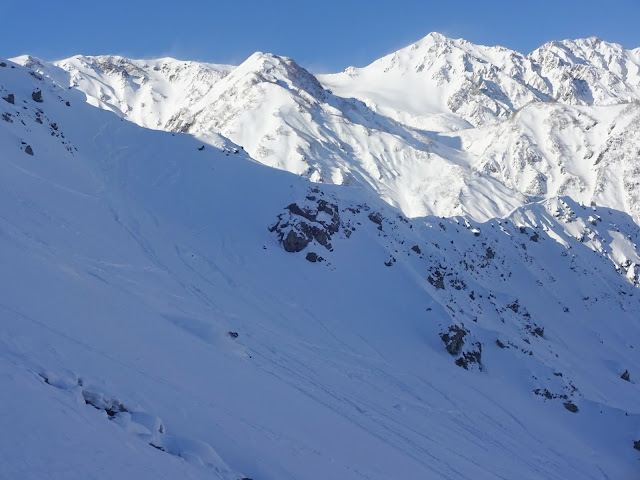 With big relief and a relatively poor start to the snow season that year, the exit of that tour involved a walk through bamboo forests, fueled by cold pot stickers. 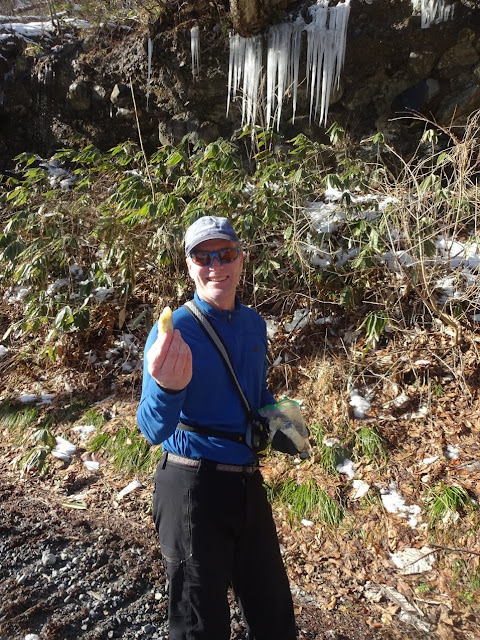