Big Snows in the Western Alps

By popular demand, here's a quick post on the big snows in the western Alps.

You may have seen news stories about this.  Huge snows in portions of the French, Italian, and Swiss Alps.  Thirteen thousand stranded in Zermatt, etc.


What adjective would you use to describe this amount of snow? Tignes (73), SE France at 1800 m today, Jan 9. Report: UCPA Tignes pic.twitter.com/RiPxH9mhYl
— severe-weather.EU (@severeweatherEU) January 9, 2018

I couldn't find a good map of recent Alpine snowfall, so I snagged just a few notable numbers from ski reports online.  On Monday, 8 January, Tignes (France) reported 31" of snow, Sestriere (Italy) 31", Cervina (Italy) 10", and Zermatt (Switzerland) 20".  The next day, Tignes got another 31", Sestriere 39", Cervina 20", and Zermatt 0.  I'm not sure exactly where those obs are taken, and if the 0 at Zermatt might indicate no report, but there were significant snows in the western Alps.  There can be huge contrasts in snowfall across and along the Alps, but I haven't bothered to detail these small scale variations here.  I will say that snow-depth forecasts from wxcharts.eu for the period ending late on 9 January showed a pronounced max along the Alpine chain at the upper reaches of the western Po Valley catchment.  This would include Sestriere and Cervina.  Tignes and Zermatt sit just across the Alpine crest. 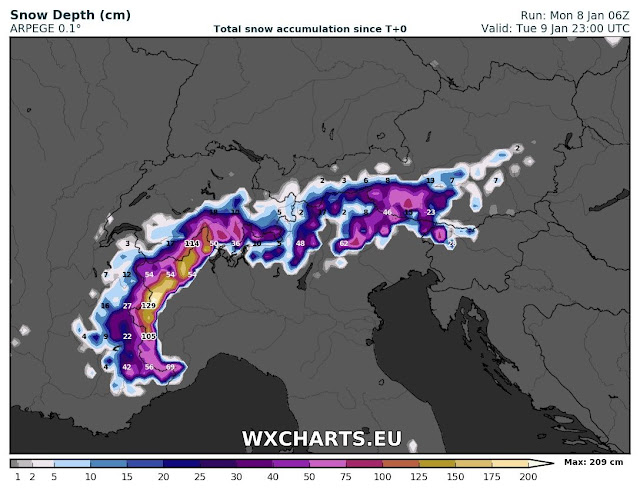 The setup for the event is shown below and features a digging upper-level trough that develops over western Europe and closes off over Spain and the western Mediterranean Basin before moving downstream.

In the interest of time, I've thrown together a map of the event, valid 1200 UTC 8 January, that includes sea level pressure (black contours), 925 mb (~750 m above sea level) wind vectors, and 925 mb temperatures.  At this time, the surface cyclone was centered roughly over the idland of Menorca in the western Mediterranean.  The cold front was ahead of the low center, passing over the island of Sardegna.  As a result, low level southeasterly flow over the Tyrrhenian Sea and west of the Italian boot impinged on the western hook of the Alps.  At the same time, there was strong flow blocking on the southern side of the Alps, resulting in a "u-shaped" sea level pressure ridge and easterly flow over the Po Valley.  As a result, southeasterly flow over the Adriatic Sea curved cyclonically and became easterly over the Po Valley, where it ran into the formidable western Alps. 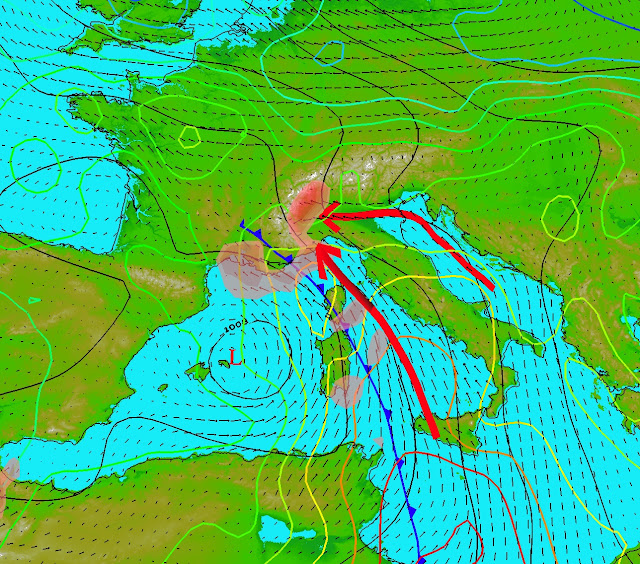 This pattern persisted for a significant period of time and I suspect that the convergence of these two airstreams and strong orographic ascent of the easterly flow over the Po Valley were important contributors to the heavy snowfall.  In pink shading, I've added the are of strongest 700-mb (3000 m above sea level) ascent and not surprisingly there is a big bull's eye over the east side of the western Alps.

Below is a sounding from Milan, in the Po Valley, 12 hours later at 0000 UTC 9 January.  You can see the low-level southeasterly flow, which is remarkably strong, featuring a 25 m/s (50 knot) lo-level jet at about 950 mb.  The temperature and dewpoint traces show saturated or near-saturated conditions through the depth of the atmosphere, with conditions that meteorologists would describe as "moist neutral."  This is a recipe for strong low-level moisture transport to the western Alps, strong orographic ascent on their eastern slopes, and in all likelihood some embedded convection to juice things up and crank up precipitation rates.

A case like this deserves a more detailed investigation than I can provide here.  I'm sure the event undergoes important evolution over the period that I haven't had time to look into, and that the terrain effects are probably very interesting and impressive if one has access to higher-resolution precipitation/snowfall data.  If you dig in, please feel free to comment and share your insights.
By Jim S Posted at 1/10/2018 02:07:00 PM