Today provided my favorite conditions for lift served skiing.  Heavy snow and wind that starts in the morning, enabling great skiing, especially in wind buffed areas, in the afternoon.  I know it might sound heretical to rank that ahead of a blue-bird powder day, but those days have simply gotten too crowded at the resorts.  I'd rather go ski touring.

Today was quite warm.  Snow levels at about 4:30 PM were just below the base of Snowbird.  It was so strange to drive down the canyon in the rain in December.

Owing to the warmth, the snow today consisted almost entirely of graupel, ice pellets, and heavily rimed crystals.  At times, if your face was exposed, it felt like a bad shave.  If you look at some of the crystals below, you can see evidence of a hexagonal shape, but they are so heavily rimed that the original snowflake is impossible to discern. 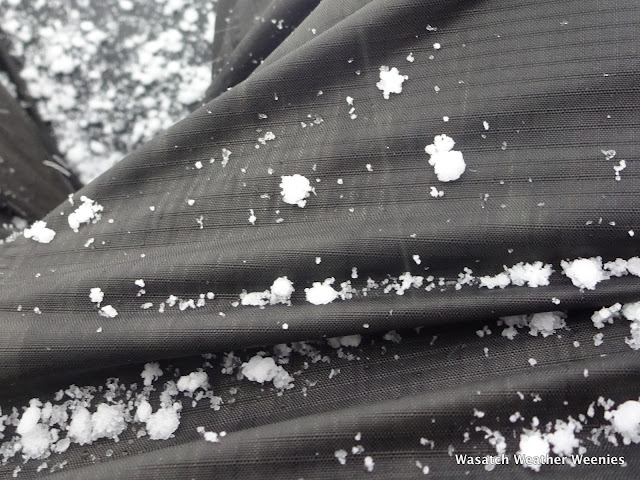 The water equivalent so far for this atmospheric river event is thus up to 1.67" of water.  As I type this, the radar looks BEAUTIFUL.  Solid echoes upstream.

With several hours of snowfall to come, we will probably be adding another 0.5 to 0.75 inches of water to the upper elevation snowpack before morning.  Snow levels will also be lowering (thankfully).
By Jim S Posted at 12/10/2016 05:51:00 PM