This afternoon, some great micrometeorological magic has been blessing Snowbird, which is now reporting 36" of new snow.  Snowfall amounts appear to decrease as one moves further east.  Automated sensors at Alta-Collins show 24" and near the base of Supreme 17".  I've also heard reports of lesser amounts from ski tourers at Solitude, and of lesser amounts at the top of the Tram compared to lower on the mountain at Snowbird.

I'm always hesitant to jump to conclusions based on automated sensors, so this discussion should be read with caution.  Nevertheless, the radar seems to support the view of a decline in snowfall from Little Cottonwood to Big Cottonwood to Park City.  Although this often occurs in NW flow, it's appears to be especially pronounced this afternoon.  To show this, I'll show a radar loop in which the high terrain around Little Cottonwood and the Park City ridge line are identifed with red lines. 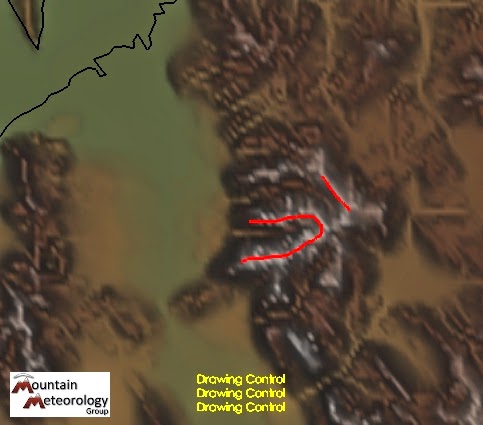 One caveat to this analysis is that the radar is partially blocked along the radial that covers Big Cottonwood, so there is some tendency for less intense and frequent echoes there due solely to that reason.  Nevertheless, there does seem to be some signal here.

With regards to the decline in snowfall near the top of the Tram, if legit, I suspect it reflects the shallow nature of the storm and considerable snow growth at mid elevations.