The Bottom Falls Out This Afternoon!

I hope you brought a jacket to work or school today as you are going to need it later this afternoon.

Yesterday we discussed the anticipated discrete propagation of a cold front across the Intermountain West (see Excitement At Last!).  Everything is coming together this morning for this to occur and for a strong cold front to move through the Salt Lake Valley later today.

We begin with a trick question.  Where is the front in the image below? 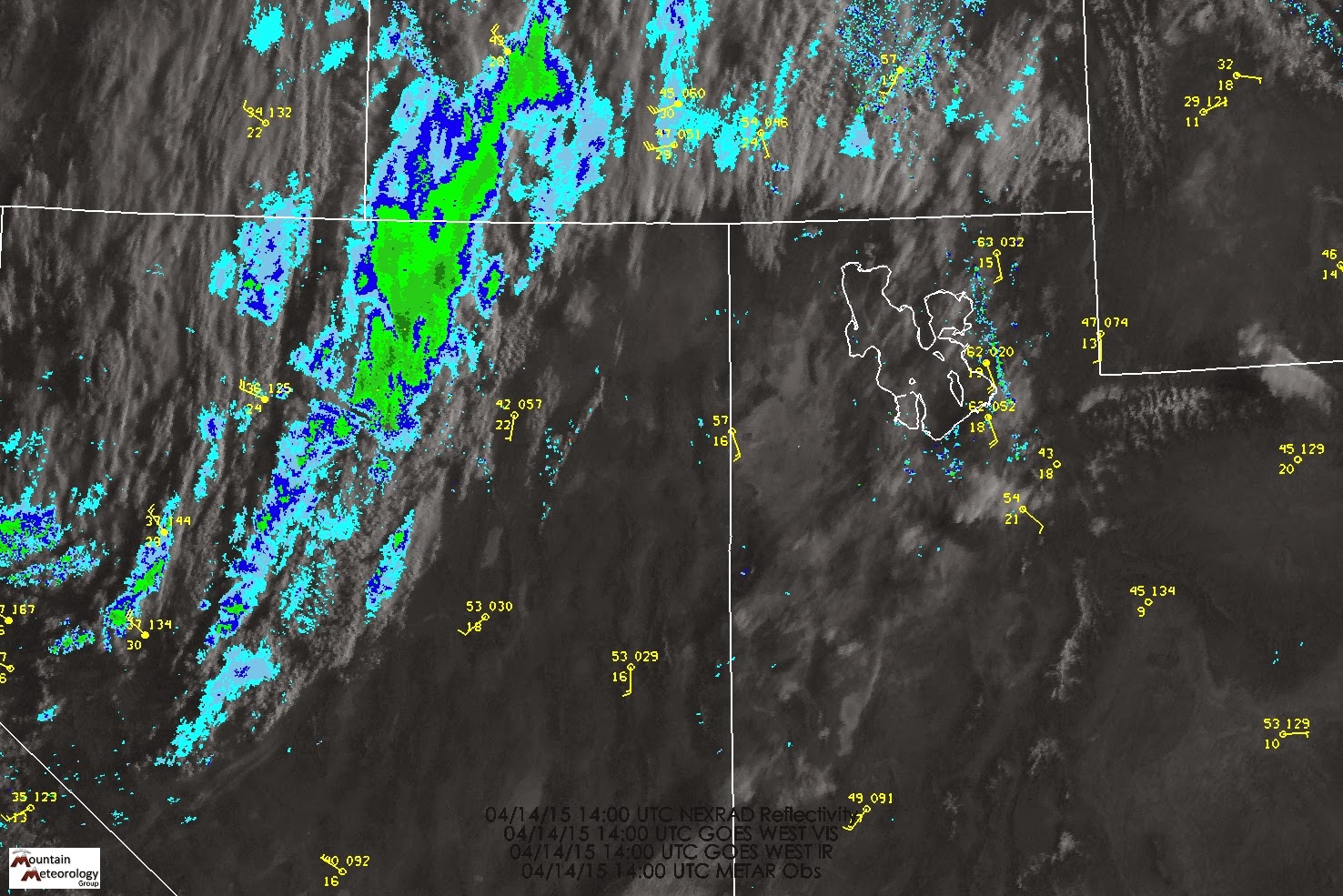 That band of precipitation in central Nevada really gets my attention, as does the shift in the wind from southerly at Elko to Northwesterly at Winnemucca.  Compared to balmy Salt Lake City, it's another world right now in Winnemucca (when isn't it — ha ha) with a temperature of 36ºF and a NW wind of 20 knots.

However, let me add the corresponding short-range HRRR forecast of 700-mb temperature and wind to that plot.  When I do this, you can see that indeed there is a trough associated with that band of precipitation over central Nevada, but also that cold air aloft is already advecting into Northwest Utah. 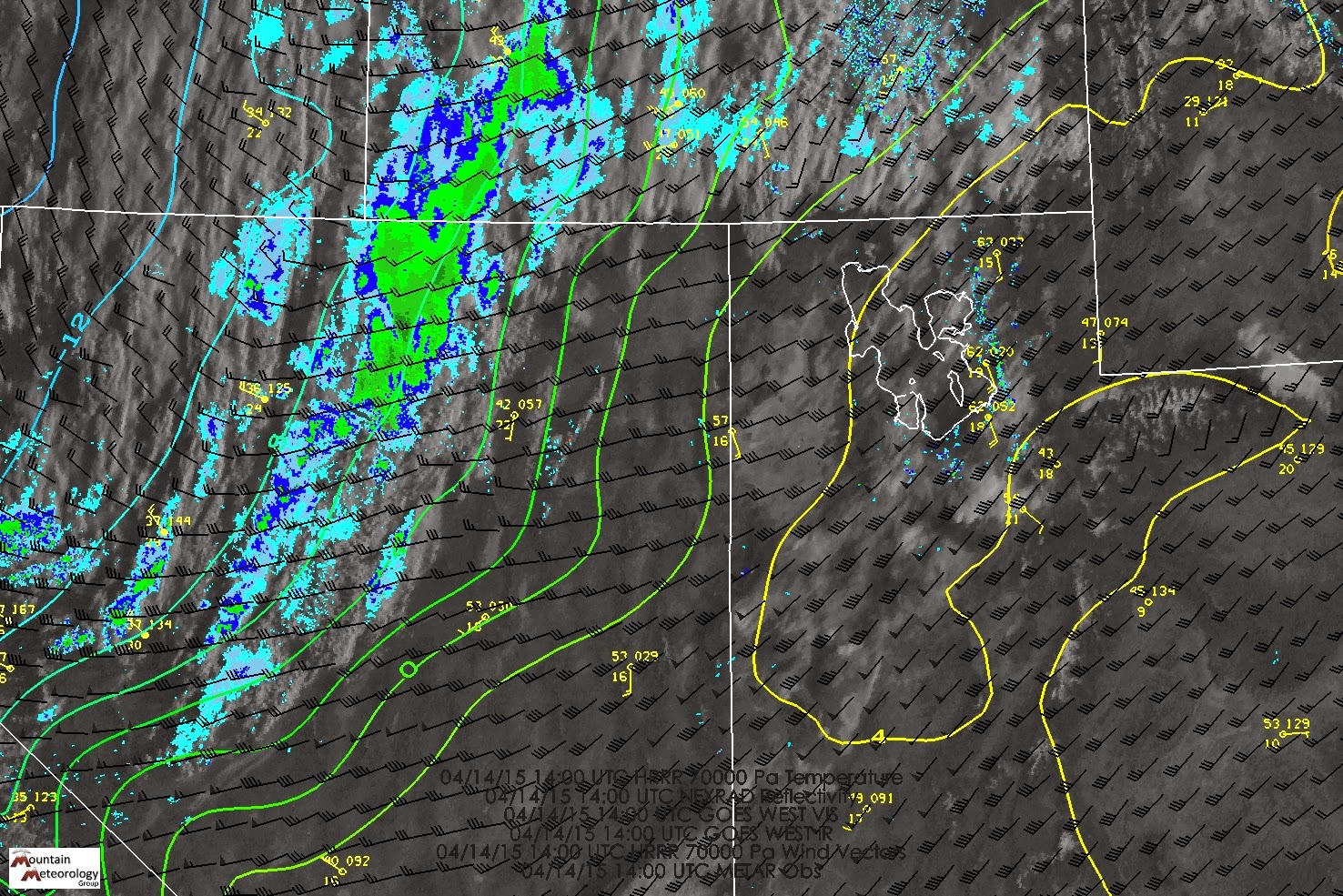 When it comes to cold fronts over the Intermountain West, you can't think of them as features that simply move continuously across the landscape.  Often times, a new front forms ahead of the approaching Pacific cold front.  This process is happening this morning.  The Pacific cold front is still over central Nevada, but a new front is beginning to form over Northwest Utah and eastern Nevada near the leading edge of the cold air at 700-mb and along a surface trough that extends northeastward from the Sierra Nevada across the Great Salt Lake Basin.  Below are the HRRR forecasts for 1500 and 1800 UTC showing this process, the latter with the observed satellite imagery. 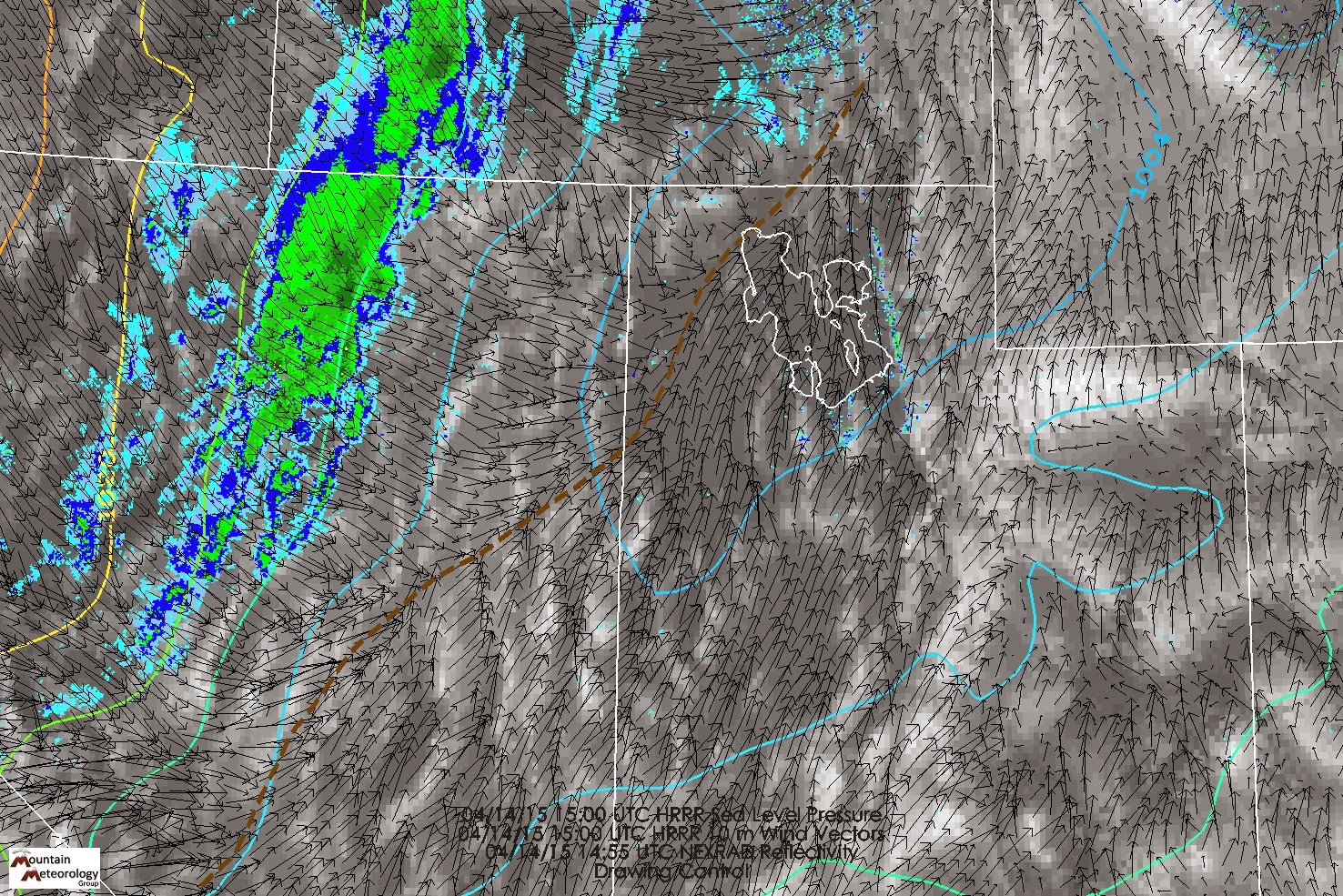 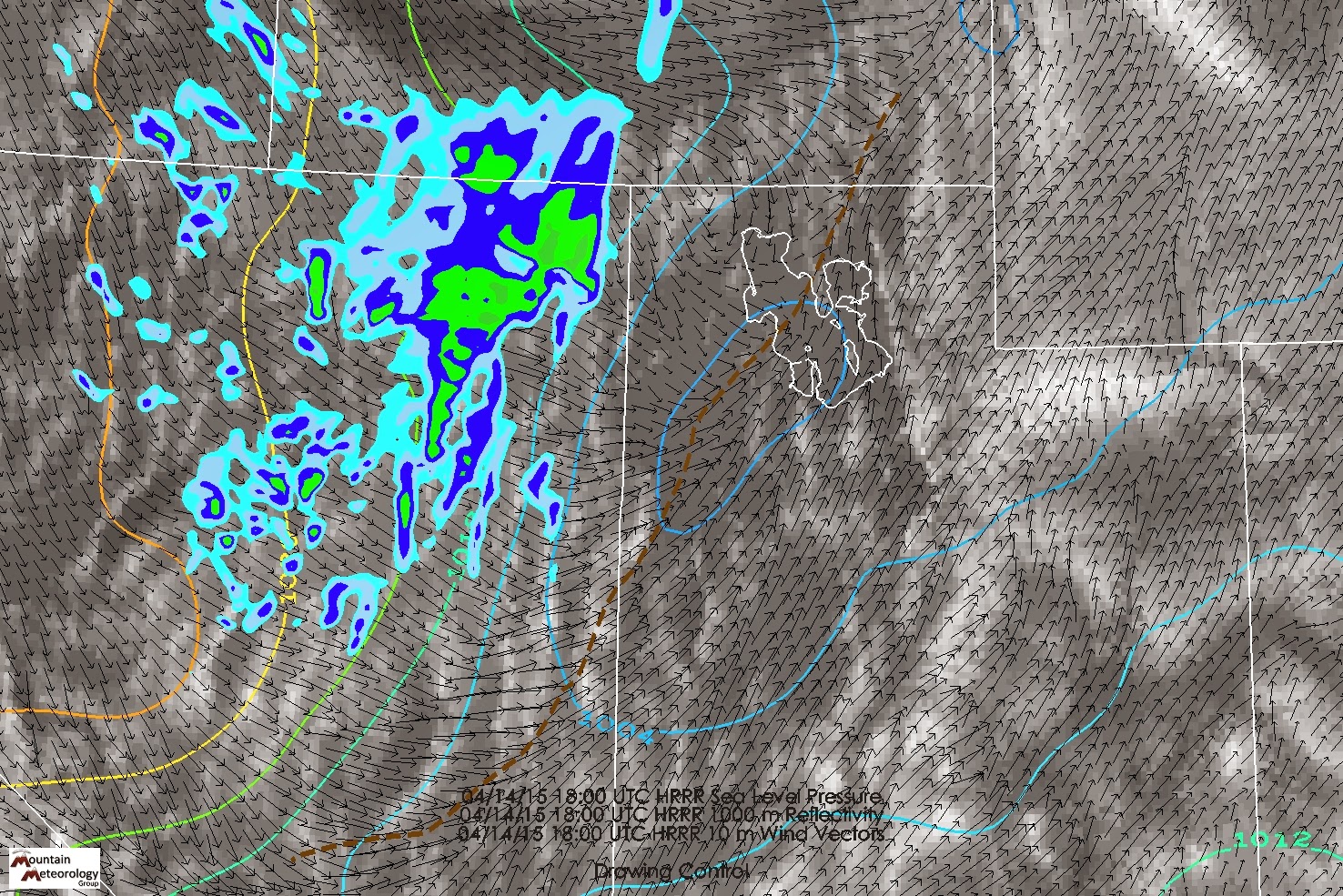 Based on observations, I think the HRRR is developing the trough a bit faster than observed, but I expect to see a healthy trough and new front emerging over northwest Utah and eastern Nevada over the next couple of hours.

This new front will likely remain to the north and west of the Salt Lake Valley through about 2 PM when it will push into the Salt Lake Valley.  Expect strong south winds ahead of it and northwest winds behind it, with some dust.  Although there's a possibility of showers and thunderstorms popping up along it, the bulk of the precipitation will come in a couple of hours later.

That's when things get even more interesting.  The NAM is advertising an extended period of precipitation through about 0300 UTC (9 PM MDT) along the Wasatch Front with temperatures and snow levels falling.  The entire event will be snow in the mountains and start as rain in the valleys, but snow levels will likely be down to the benches by 6 PM or so.

So, we're likely going from a high temperature in the upper 60s today at about noon to snow on the benches by 6 PM.

Snow showers are possible at all elevations overnight and early tomorrow as a very cold airmass moves over us and we get a secondary trough passage from the north.  The lake temperature right now is about 11.7ºC and there's a pretty good chance that we will see some lake effect overnight.  Where, when, and how much is a bit of a crap shoot.

For the Cottonwoods, I think something in the 4-8 inch range is probably reasonable for through about 9 PM tonight.  After that, much will depend on the intensity, frequency, and location of the post-frontal snow showers.  By and large, I think the odds of a "deep powder day" (10 inches or more) by tomorrow morning are better than 50/50 and high enough that I'd advocate for getting up and checking the snow report in the morning.  It is mid April after all and we've had few powder days this year.  For a storm total, the NWS forecast of 8-16 inches seems pretty reasonable as the most likely range of possibilities.  I'd be disappointed if the storm total was less than 8 inches.  I wouldn't be shocked if we did better than 16, although I don't think this is a high probability outcome.