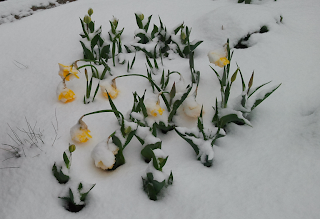 A fascinating storm last night with lots of curiosities from the large to the small scales.  We'll start with the large scale.  First, this is an event associated with the passage of an upper-level trough that lags well behind the surface trough and leading edge of cold air at the surface.  As shown in the 0600 UTC (Midnight MDT) analysis below, the primary low-pressure system and surface trough were well downstream of northern Utah last night, as was the leading edge of the cold air at 700 mb (crest level).

At 700 mb (roughly crest level of the Wasatch Mountains), however, the wind trough (i.e., the shift in winds to northwesterly) lags well behind these features and is located just upstream of Salt Lake City.

Consistent with the above observations, the winds at the Salt Lake City International airport were northwesterly all night last night (ignore the spurious 70 mph gust which is a reporting error).  One can see only a modest drop in temperature at around 1000 UTC as precipitation moved over the airport. 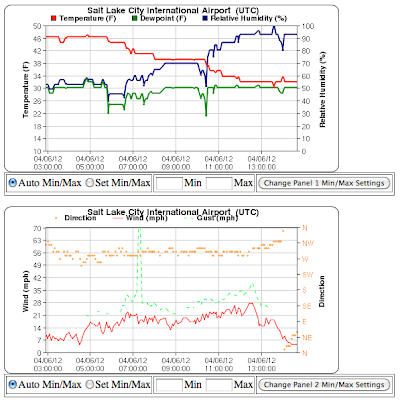 At 11,000 feet on Mount Baldy in Little Cottonwood Canyon, however, the winds were southerly through 1000 UTC, and then shifted to westerly by 1400 UTC.  This wind shift occurred with the passage of the upper-level trough. 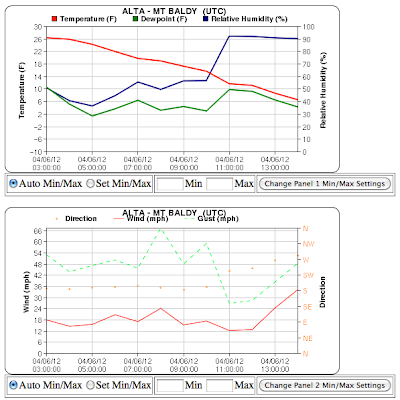 So, this is a case in which precipitation was generated while we were in shallow northwesterly flow at low levels, but experienced a trough passage at crest level.  The resulting effects on precipitation are fascinating.  As shown in the first half of the radar loop below, precipitation developed and remained fixed to the windward slope of the central Wasatch Mountains (right hand red box) ahead of the approaching large-scale precipitation shield.

During this period, radar echos did not extend into the upper Cottonwood Canyons.  I believe this is because the northwesterly flow and upslope was very shallow.

It was not until the trough and associated large-scale precipitation shield moved in that precipitation began in earnest in the upper Cottonwoods (Alta-Collins did not record measurable precipitation until 1300 UTC).  Once that happened, snow began to fall throughout the Cottonwoods, heavy at times.  In the latter half of the loop, after about 1200 UTC (GMT in the time stamp in the loop is equivalent to UTC), persistent, locally high radar reflectivities develop over the Cottonwoods and surrounding region.  If the obs are legit, 9" of snow has fallen at Alta-Collins from 1200-1500 UTC with .44" of SWE (about 5% water content).

In contrast, in the box to the west, which is over the western Salt Lake Valley, persistent precipitation shadowing occurs downstream of the Oquirrh Mountains.  Note how lower radar reflectivities are generally observed in this region.
By Jim S Posted at 4/06/2012 09:33:00 AM