In an earlier post, we discussed some of the remarkable weather contrasts that existed between the Cottonwood Canyons and the Wasatch Back during the day on Sunday.  This included a pronounced cloud shadow that formed over the Wasatch Back and Park City Mountain Resort (PCMR), as well as the occasional spillover of precipitation across the Wasatch Crest.  Also, it was readily apparent that the snowpack at PCMR was substantially thinner than that found in the Cottonwood Canyons.

Although the lack of snow at the base of PCMR on Sunday is partly related to elevation (the area pictured lies between 7000 and 8400 ft) and aspect (east to northeast), even on elevations and aspects similar to those at the resorts in Little and Big Cottonwood Canyon, the snowpack was markedly thinner.  This is confirmed by SNOTEL observations from Sunday at Snowbird in Little Cottonwood Canyon (31.5" SWE and 78" snow depth @ 9640 ft) and Thaynes Canyon in PCMR (14.5" SWE and 44" snow depth @ 9200 ft). 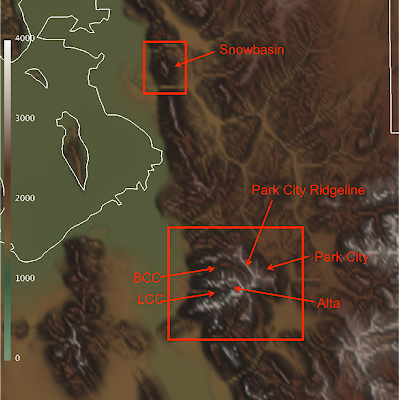 Although there can be storm periods during which the flow is southerly, southeasterly, or easterly and the Park City resorts benefit from temporarily being on the windward side of the Wasatch Mountains, during most storm periods, they are on the leeward side.  Thus, the mean annual snowfall is about 33–40% lower at PCMR than found at comparable elevations in Little Cottonwood Canyon.


This is consistent with snowpack SWE observations from the Snowbird and Thaynes Canyon SNOTEL stations, respectively, which peak at an average of about 42" and 25", respectively (a difference of about 40%).

The height and breadth of the central Wasatch topography contributes to this contrast.  Where the Wasatch are narrower, such as around Snowbasin, more precipitation generated on the windward side of the mountains spills over into the lee.  This is one reason why the average snowfall and snow depth at Snowbasin is greater than found in the Park City area.

Making all this even more remarkable is the snowfall contrast between Alta and Park City occurs over a distance of less than 15 km.
By Jim S Posted at 4/18/2012 11:06:00 AM