I'll summarize with the Snowbird SNOTEL measured snow water equivalent (SWE) of the snowpack.  At this elevation, the season got off to a good start with SWE increase of 4.7" from October 8 to October 27. 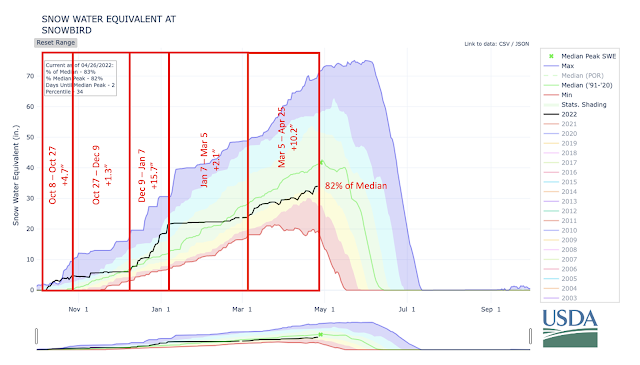 Then the spigot turned off and we only added 1.3" from October 27 to December 9.  The snow faceted on the north half of the compass, forming a persistent weak layer that would haunt us for a significant part of the winter and in many areas melted out on the south side.
The storm track returned in December and Mother Nature added 15.7" of SWE to the snowpack through January 7.  That was a pretty good run and the only period outside of October that the snow accumulation rate that exceeded climatological expectations [i.e., the slope of the median (green) line] for more than a few days.
We then lived on that snow until early March.  From January 7 to March 5, Mother Nature only added a scant 2.1" to the snowpack.  I have heard rumors it was the least snowy February on record at Alta.  I haven't seen the numbers for Alta Guard yet, but before this year, the minimum there was 34" and the resort reported 26" based on their snowfall history page, so chances are we set that dubious record.
From March 5 through today, we've seen a series of storms interspersed with ablation (snow loss) events.  The SWE trace (black line) during this period shows ups and downs.  In the net, the SWE increased about 10.2" during this period, a rate that was still less than median for the period.  However, if my calculations are correct, the Snowbird lost 2.4" of SWE during those ablation events.  Without those losses, the accumulation for the period would have been 12.6", very close to the median SWE increase for the period of 13.1".
I see that period from March 5 to April 25 as perhaps an example of the future Wasatch spring snow climate, with the snowpack ripening earlier, significant losses occurring on south aspects, and the frequency and severity of ablation events on north aspects increasing.
My grade for the season is an incomplete.  I'd like to give it a C+, but due to a foot injury, I haven't done much skiing other than groomers since early February and had to sit out the storm cycle this weekend.  Thus I lack the ability to properly asses the season and encourage you to input your grade and justification in the comments below.
By Jim S Posted at 4/26/2022 08:19:00 AM