As anticipated in Monday's post, a messy storm has arrived in northern Utah.

Let's start with the big picture.  The 6-hour GFS forecast valid at 1200 UTC (5 AM MST) this morning shows high integrated water-vapor transport (IVT) values associated with an atmospheric river curving anticyclonically (clockwise) from near Hawaii over a high-pressure system off the coast of California and across Oregon and Idaho towards Utah.

This pathway across Oregon and southern Idaho is one of two key ones for atmospheric river penetration into northern Utah as it minimizes water vapor loses to precipitation over high barriers such as the Sierra Nevada.  The other key pathway comes up the lower Colorado River Valley and through western Utah.

This morning's 1200 UTC (5 AM MST) sounding from the Salt Lake City airport shows saturated conditions near and above 700 mb (about 10,000 feet), but drier air below that level,  Thus, moisture transport has come in aloft over the drier air that was resident over the Salt Lake Valley and Great Salt Lake Basin. 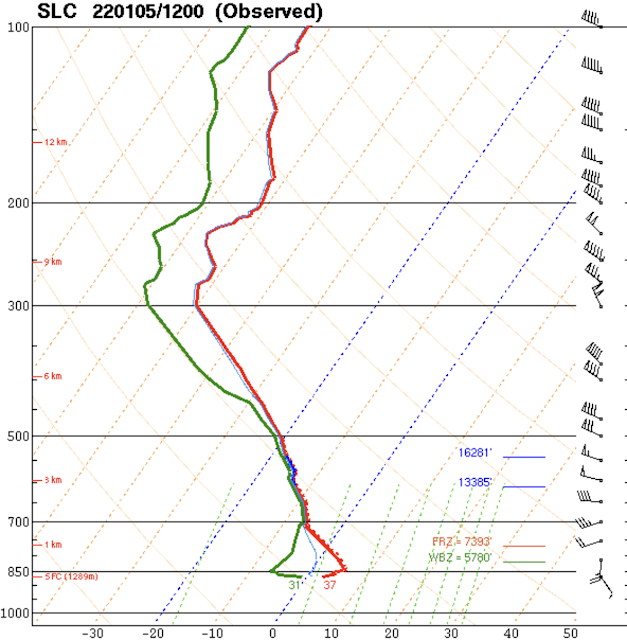 This is consistent with the view looking south from the University of Utah this morning which shows layered clouds based at about 9000 or 10000 feet above sea level.  Note also the transition from west (right) to east (left) with the mountains becoming obscured, a tell-tale sign of orographic precipitation enhancement as the flow moves over the mountain barrier. From 5-8 AM MST this morning, Alta-Collins recorded 0.68" of water equivalent and about 4" of dense snow.  Total water and snowfall since yesterday are 0.93" and 6" respectively.  It's running around 35˚F at Mountain Dell (5700 ft), so the snow level is probably at or around 5500-6000 feet, although it will fluctuate some with precipitation intensity.  At the University of Utah at 7:30 AM it was raining with the occasional flake mixed in.
The models promise much of the same through the day and at least into the early evening tonight, although precipitation rates will probably modulate some.  Precipitation rates will slacken later tonight with the storm winding down tomorrow.  Temperatures and snow levels may bounce around a bit today, but the long-term trend is upward.
The GFS is running a bit behind the water and snowfall totals at Alta-Collins, but ultimately generates a storm total of 2" of water and 19" of snow through 11 AM tomorrow, most of that coming through about 2 AM tonight. 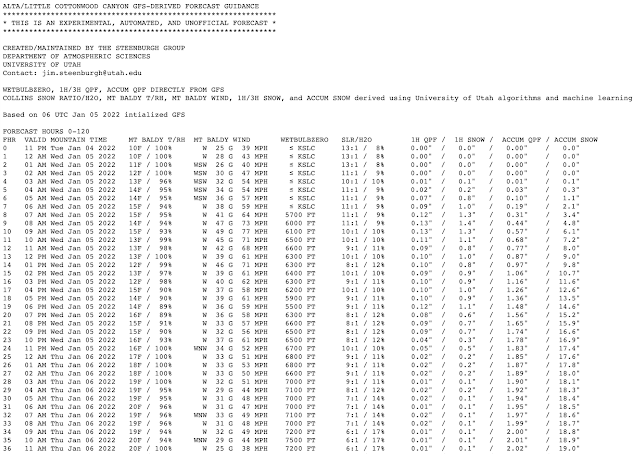 Those numbers are near the mean for the downscaled short-range ensemble forecast system (SREF), but a bit more than double the European model.  Another 1-1.75" of water and 8-16" of high-density snow seems likely for the upper-elevations of Little Cottonwood through tomorrow.  Did I mention the wind?  That will be high as well.
By Jim S Posted at 1/05/2022 08:32:00 AM