It was a great run during the holidays for northern Utah.  From December 22 to January 1, Alta recorded 70 inches of snow.  All resorts and backcountry areas benefited, as did the Nordic skiing.  Mountain Dell has great cover heading into 2022. 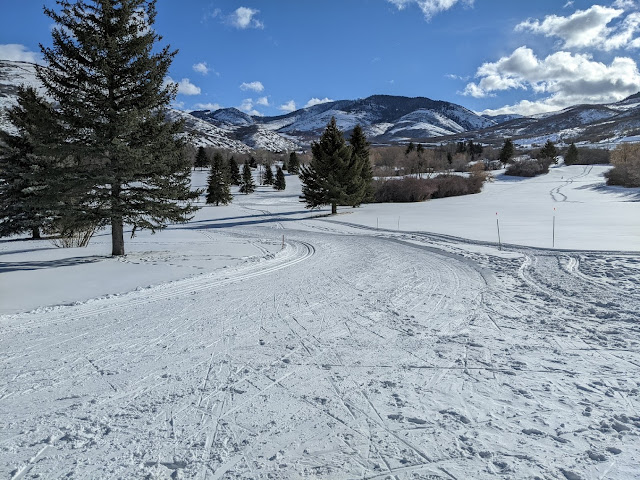 Then, the sun came out in the Cottonwoods over the weekend and it was nice to see it.  Yesterday was spectacular in the backcountry, with amazing conditions.

I exit the holiday week tired but happy.  I can't remember the last day I didn't ski tour or skate ski!

The week ahead promises some snow, but it looks messy.  I'll summarize in three parts.

First is tomorrow when we are in predominantly zonal (westerly) flow at the tip of a decaying inland-penetrating atmospheric river.  Expect some snow to develop during the day, especially in the northern Mountains.

Second is late Tuesday night and Wednesday when a weak trough passes through, driving what will probably be the snowiest period of the week.

Third is moist northwesterly flow that persists in the wake of the trough through Thursday morning.

The models differ on some critical elements of the forecast, especially in the wake of the trough on Wednesday and Thursday.  The GFS is fairly warm, increasing the 700-mb temperatures to around -4˚C by 5 AM Thursday, whereas the European and NAM are quite a big cooler and go for -8˚C and -7˚C respectively.  Where we end up in this temperature spectrum will play a bit role in the later stages of this storm and whether or not we see a transition to rain in the lower elevations, or cling to snow until later in the event.  It will also affect snow quality at upper elevations.
Below is the GFS-derived forecast for upper Little Cottonwood.  Keep in mind that this is one of the warmer forecasts.  There are some dribs and drabs on Tuesday, but things really pick up late Tuesday night and Wednesday with the passage of the trough.  Through Thursday morning, the GFS generates almost 2 inches of water and just over 20" of high-density snow. 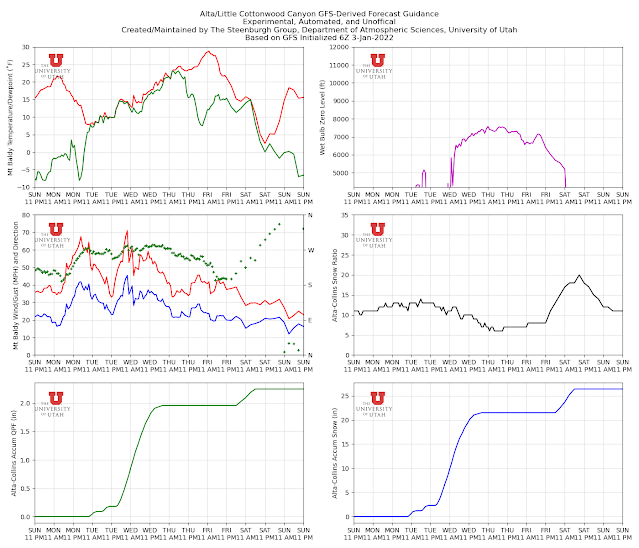 Note also that the temperatures on Mt. Baldy rise through the period, as does the wet-bulb zero level, and it is pretty windy.  During the period of heaviest precipitation, the snow-to-liquid ratio decreases.
The GFS warms faster than the other models, but with the wind and the overall synoptic setup, this will probably be a period of higher density snow and possibly some upside-down skiing conditions, especially in the backcountry.  In other words, messy.
Still, it's snow, and we'll take it.
By Jim S Posted at 1/03/2022 09:04:00 AM