The Pacific Storm Track is angry my friends and about to unleash some serious weather on the western United States.

I'll focus on one component of the forecast, precipitation, and will use the downscaled NAEFS-derived forecast below to summarize.

Over the next 7 days, the average amount of precipitation (liquid equivalent) produced by the 52 NAEFS members in the mountains of northern California exceeds 10 inches in portions of the Coastal Mountains and Cascades/far northern Sierra.  At these "favored" locations the driest members produce over 5 inches and the wettest over 20 inches.

The plume for the Mt. Shasta Ski Bowl at 8,000 ft elevation shows a mean of almost 8" with most of the NAEFS members clustered between 6 and 8.5", although the full range of all members is about 3.5 to 12".  Our snowfall algorithm is known to overestimate snow-to-liquid ratio in this part of the world so be cautious interpreting the snowfall plume.  Snow levels will be pretty high through late morning Friday time, but significant snowfall is likely at upper elevations thereafter.

The scary aspect of this forecast for northern California is heavy rainfall on new burn scars.  The potential for flooding and debris flows is high.

Meanwhile in Utah, the forecast is scary for meteorologists because of uncertainty.  At Alta Collins, it's likely to stay mainly dry through Friday and then things get interesting.  The spread in the NAEFS forecast for precipitation and snowfall amount through early next week is enormous and ranges from practically nothing to 6" of water and nearly 80" of snow through 0000 UTC 27 October (6 PM Tuesday).

In the NAEFS plume, it is often a member from the Canadian model that is the high outlier, but in this instance, both the Canadian ensemble and the American GEFS ensemble are exhibiting huge spread.  Note that there are also differences in the timing of the heaviest precipitation periods.

The GFS sits about in the middle of the downscaled NAEFS distribution, so I'll use our GFS-derived forecast here as one possible outcome.  The GFS produces two major storm periods.  One is from late Saturday to Sunday morning.  The other starts Monday night and extends into Tuesday night (recall that the NAEFS illustrates there are variations in timing depending on the ensemble member). Total water equivalent a bit over 2.5 inches for the entire period with total snowfall just over 25" at Alta Collins. 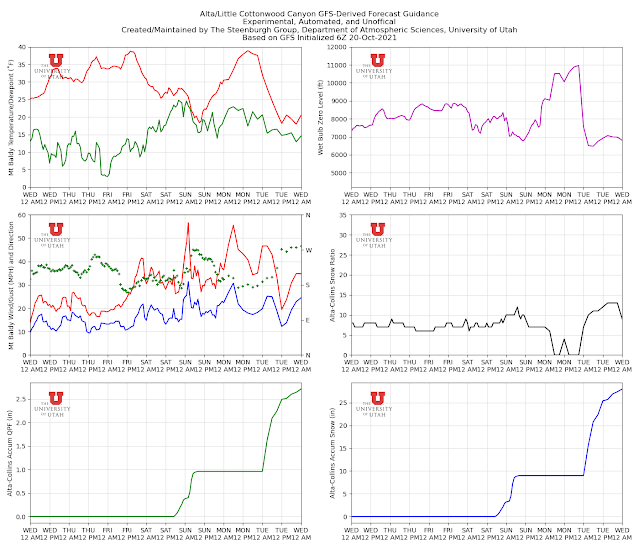 If you do the math on the snowfall and precipitation, that's a mean snow-to-liquid ratio of about 10:1, which is lower than average, meaning heavier snow.  I see that as a good thing as paste is better than blower for base, but snow levels at times could be at or above 7000 feet depending on how everything comes together.  There is also a major warmup between the two storms, with 11,000 ft temperatures reaching almost 40˚F.

If the storms come together, we will see a major increase in avalanche risk and I suspect that resorts like Alta may consider closing for a while to uphill to do avy control.  Monitor resort and Utah Avalanche Center web sites, respect snow-safety closures, and remember that if open to uphill skiing, the resorts are still de facto backcountry.