It's good to see the Pacific Storm Track angry again.  Below is the situation at 1200 UTC (0600 MDT) this morning.  The Pacific Jet is oriented predominantly zonally (i.e., from west to east) and quite intense with a maximum speed in the western Pacific of over 90 meters per second (180 knots, yellow to orange color fill).  Just ahead of and beneath the jet-speed maximum, called a jet streak by meteorologists, is a surface cyclone (circled in red) just south of the western Aleutians.  Ahead of that system are two cyclones and associated frontal systems (cold fronts identified with blue lines and triangles). 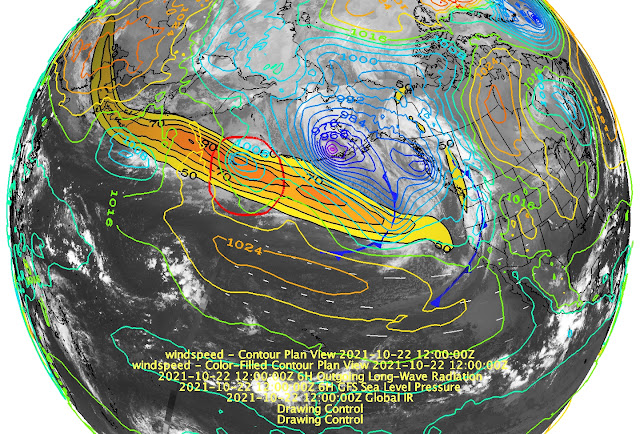 The easternmost of those frontal systemswill give us a bit of valley rain and mountain snow tomorrow.  The one further west will decay and pass to the north.  However, all hell breaks lose further upstream as the upper-level pattern amplifies and the surface cyclone that is currently south of the western Aleutians rounds the base of the amplifying upper-level trough and undergoes explosive cyclogenesis off the Pacific coast.

The result is a very powerful cyclone off the Pacific Northwest coast that will transport copious amounts of moisture into the western United States.

Below is the forecast of integrated vapor transport, a measure of the total water vapor transport throughout the atmosphere, at 1800 UTC 24 October (Noon Sunday MDT).  Values > 250 kg/m/s (color shaded) are indicative of Atmospheric River Conditions.  Values in an elongated plume that intersects the Bay area are greater than 1400 kg/m/s.  Additionally, the transport vectors are oriented perpendicular to the coastal ranges and Sierra Nevada, which is optimal for precipitation enhancement.

Below is our downscaled SREF forecast plume for Kirkwood.  The ensemble mean accumulation from about 1200 UTC 24 October to 0000 UTC 26 October is a bit over 7 inches.  Snowfall is about 30 inches, although this is a fairly warm storm and a lot is going to depend on elevation, temperature, and precipitation intensity.  The "driest" ensemble members generate about 4 inches of water.

What will happen in the Wasatch?  The GFS forecast currently calls for an extended period of Atmospheric River conditions from 2100 UTC 24 October (2 PM Sunday) through 2100 UTC 25 October (2 PM Monday).  Unlike California, Atmospheric River conditions here are a bit more fickle and the GFS keeps things dry until the cold front approaches on Monday.  One can see this general behavior in our downscaled NAEFS plumes for Alta.  After a bit of snowfall on Saturday, things hold off until after 1200 UTC 25 October, with most members bringing in the precipitation later on Monday (although there are some that start earlier).

That ushers in a very heavy period of snowfall as the moisture associated with this system combines with the frontal forcing.  I suspect the big snowfall numbers being put out by the NAEFS are over done, so don't let those bias your enthusiasm.

By and large, things look good for further building of base at the Cottonwood resorts.  A few inches Saturday, a break with wind on Sunday, and then a big burst on Monday/Monday night.  I'll try and do an update over the weekend as the details concerning this system come together.