October is coming through in spades for skiers.  As of 7 am this morning, the latest storm has produced 0.85" of water and 9" of snow at Alta-Collins, bringing the snow depth up to a solid for mid-October 25".

The HRRR analysis for 1200 UTC (6 AM MDT) this morning shows wrap around precipitation over the Wasatch and Wasatch Front, which is a pretty close match to reality.

The forecast for 1500 UTC (9 AM MDT) shows the continuous precipitation shield breaking up into more scattered precipitation.

Thus, I expect the snowfall in the central Wasatch to transition to snow showers that become widely scattered by later this morning.  Storm totals should be in the 12" range, give or take.

It's been a mighty long time since we've had this much snow so early in the season.  Below are traces of the snowpack water equivalent at Snowbird every water year (beginning October 1) since the 2000 water year.  This year is in blue, showing about 4" as of about midnight last night.  The green line that surges to over 10 inches in late October is the 2005 water year and reflects the big October 2004 storm cycle.  However, that didn't start as early as this one, although it delivered big time when it did. 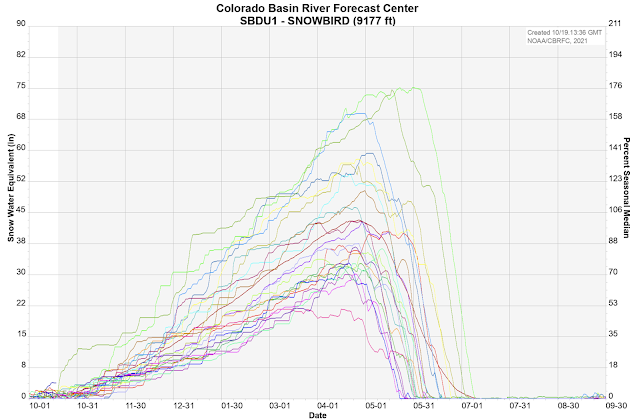 The models are hinting at the possibility of another period of precipitation sometime this coming weekend to early next week.

There's not a lot of agreement yet amongst the various ensemble model members concerning details, so stay tuned.
By Jim S Posted at 10/19/2021 07:53:00 AM