What If RBG Had Been a Scientist? 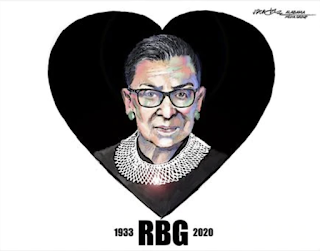 "When I’m sometimes asked ‘When will there be enough (women on the Supreme Court)?’ and my answer is: ‘When there are nine.’ People are shocked. But there’d been nine men, and nobody’s ever raised a question about that.”
- Ruth Bader Ginsburg

After the passing of Ruth Bader Ginsburg on Friday, I found myself choked up.  It is the tough loss of a great woman who meant a great deal to many, including my young daughter as she has grown into a young woman.

This is the male-dominated STEM world that Ruth Bader Ginsburg would have fought through in about 1956 when she entered graduate school, 1961 when she would have completed her Ph.D., and 1962 when she would have joined the atmospheric sciences or other STEM department at some prestigious University.  Even today, women are underrepresented throughout the STEM pipeline and account for only 18-31% of faculty in STEM fields.

Imagine if RBG had joined the STEM world and how she would have been an agent for change.  She would have fought against gender pay inequity and sexual harassment in all of its forms.  She would have been an advocate for a more diverse faculty and the elimination of gender bias in faculty recruiting, hiring, and mentoring, as well as the classroom.  She would have rewritten the policies uses for the retention, promotion, and tenure of faculty, eliminating gender biases and rewarding faculty for their efforts to promote of feeling of belonging in STEM not just for women, but all from marginalized communities.

RBG would have surely been a great scientist, but I think we can all be grateful that she found her passion and calling.  STEM's loss is the country's and world's gain.  However, all of us in STEM can learn from the ideals she pursued and work to achieve them in our disciplines where we still have so much work to do.