It's hard not to get excited about the first major cold surge of the season after the blistering heat we've suffered through the last several weeks.  Mother Nature is going to make us suffer this weekend, but MAJOR change is coming by Tuesday.

The loop below shows the GFS forecast 500-mb heights (black lines) and 925-mb temperatures (colored lines) from 1200 UTC (0600 MDT) this morning through 1200 UTC (0600 MDT) Tuesday.  There are two major large-scale circulation changes that occur at upper levels.  First, the ridge from hell that has dominated our weather for so long weakens and shifts upstream.  Second, the upper-level pattern becomes much more strongly amplified, meaning that the ridges and troughs get stronger, resulting in a more wave like pattern, which by Tuesday morning features a high-amplitude ridge over the northeast Pacific and a deep trough digging into the Rocky Mountain region.

With that trough comes one hell of an airmass change, as might be inferred from the 925-mb temperatures above.
The ECMWF advertises a somewhat similar solution, but with a slightly stronger trough.  To illustrate the remarkable airmass change, below are ECMWF 700-mb (10,000 ft) temperature forecasts (color fill) from pivotalweather.com valid at 0000 UTC 8 September (1800 MDT Monday) and 1200 UTC 8 September (0600 MDT Tuesday).   In that 12-hour period, the 700-mb temperature drops from 15˚C to -2˚C. 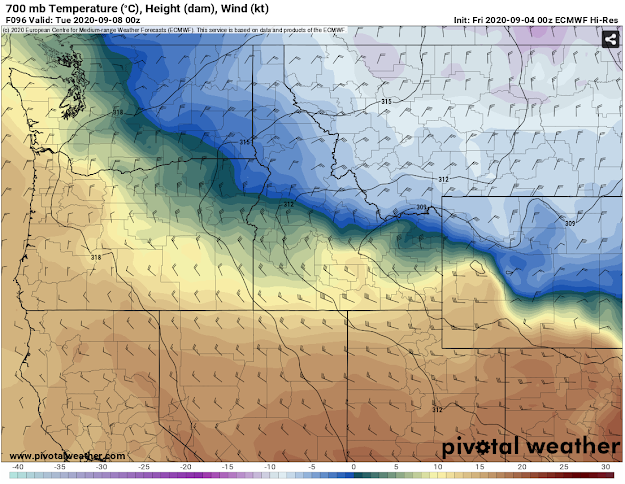 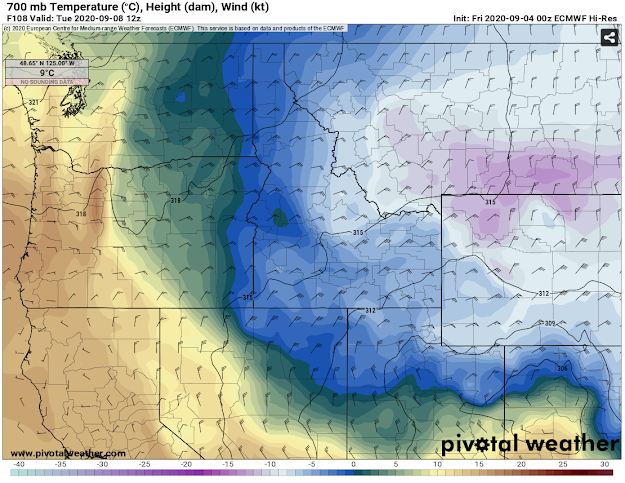 If we go six hours later to 1800 UTC 8 September (1200 MDT Tuesday), we're down to -3˚C and there are strong east winds extending from southwest Wyoming across the Wasatch Range.  Should this verify, a concern would be the potential for strong downslope winds along the Wasatch Front on Tuesday. 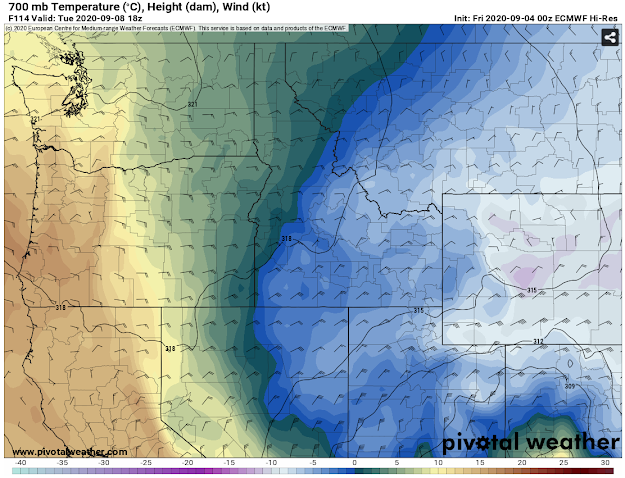 Another potential issue is snow in the mountains.  The ECMWF is most productive in the Uintas. 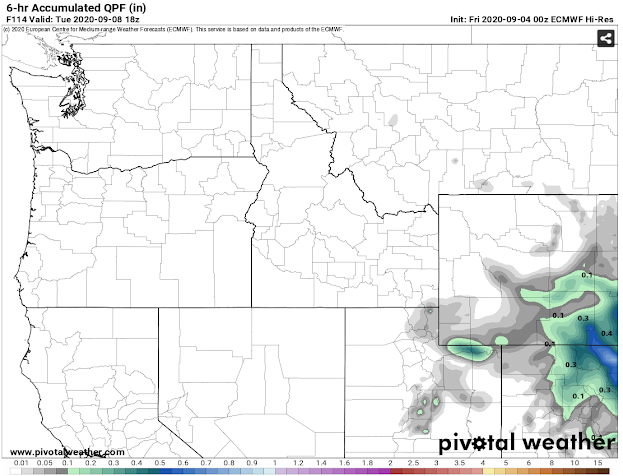 Ensemble forecasts for Trial Lake along the Mirror Lake Highway show most members generating an inch or two of snow, but a few members going for several inches of high-density snow.

The bottom line is major change is coming.  Details concerning downslope winds, which are very sensitive to small changes in flow direction, or mountain snows remain less certain but warrant monitoring the forecasts and adjusting plans as needed.
And, if you are wondering if we're going to stay cold for a while, that looks unlikely as temperatures will eventually recover during the work week.
By Jim S Posted at 9/04/2020 10:22:00 AM