With our time in the Alps nearing and end, we took a long weekend in the Dolomites, which exceeded our high expectations in every way.

I'm no geologist, and I don't really know where the Dolomites start and where they end.  What I do know is that they are fundamentally different from the Alps of the Austrian Tirol, which deeply incised, broad valleys enable one to penetrate deeply into the mountains.  Instead, the Dolomites are more of a jumble of mountains, which means getting anywhere means traveling on some of the most unbelievable mountain highways you can imagine.

We're talking hairpin after hairpin.  Massive ascent followed by massive descent.  One pass we went over involved more than 30 hairpins on the climb and then another 30 or so on the descent.   Below is a very small sample from Passo Falzarego. 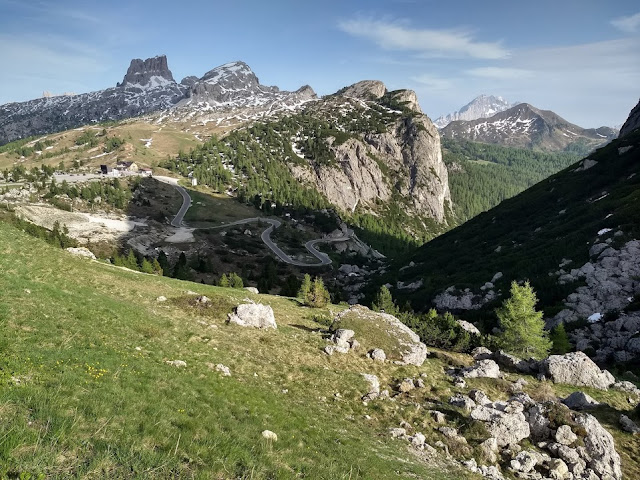 I don't think I've ever had more fun driving.  The underpowered Skoda we rented has no clutch or breaks left.  On the other hand, the driving is also terrifying because you share these sinewy roads with motorcycles, cyclists, busses, and Italian sports cars.  Below is the tail of a flock of Ferraris that was about 20 or 30 long, each car driven by someone with more money than brains. 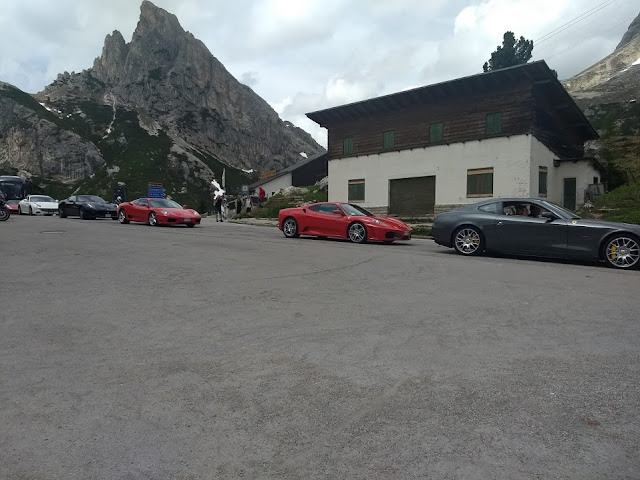 The Dolomites also feature some strong gradients in culture and run through the Italian provinces of Süd Tirol/Alto Adige, Belluno, and Trentino.  Depending on where you are, the majority might speak German, or Ladin, and many residents speak multiple languages.  The clerk at our pension told us "we speak five languages here."   Since we were speaking English, I can guess the fourth.  Perhaps the fifth is the Tirolean dialect of German.  Food covered the gamut and where we stayed in Badia offered a nice blend of Italian and Tirolean.  And of course there is wein/vino and bier/birra.

But we were mainly there to hike and gawk at the mountains.  We began with a cable-car ride above Ortesei in Val Gardena and a few hours hiking across the Seiser Alm/Alpe di Siusi (many geographic features in the region are known by German, Itailan, and in some cases Ladin names).   This is supposedly the largest high mountain plateau in the Alps.  It's a wide open expanse offering more gradual ascents and descents and long-distance views. 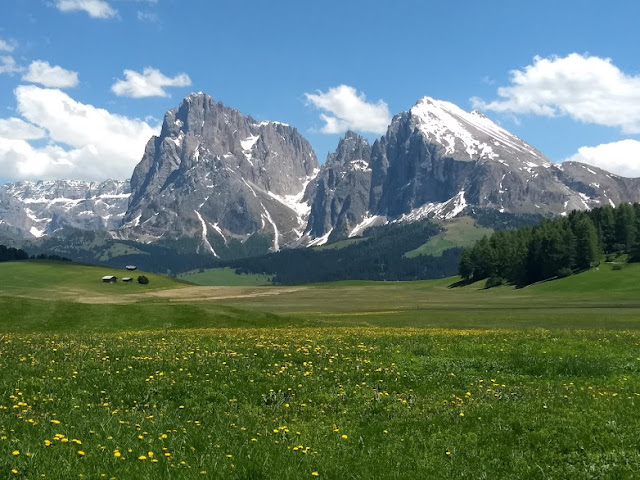 The area is crossed with roads and dotted with hotels, guesthouses, and restaurants.  You could elect to bike if you desired. 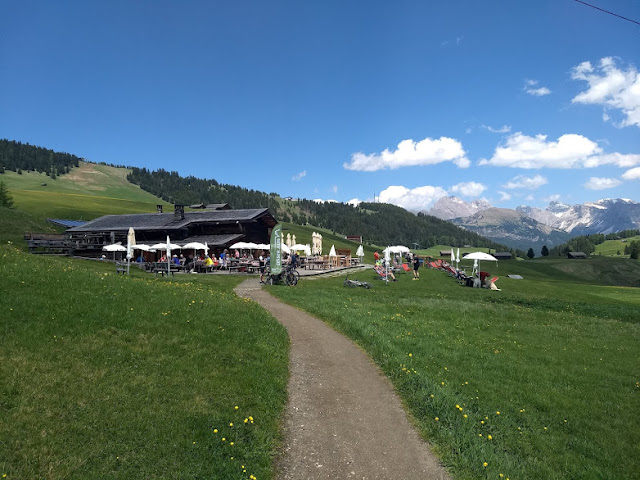 The next day involved a couple of hikes near Cortina d'Ampezzo.  The first involved a ride up the Faloria cable car with short hike above.  Below is the view of Cortina and the Tofane Mountain Group to the west.  There is a three-section cableway ascent nearly to the top of Tofane, but it was closed. 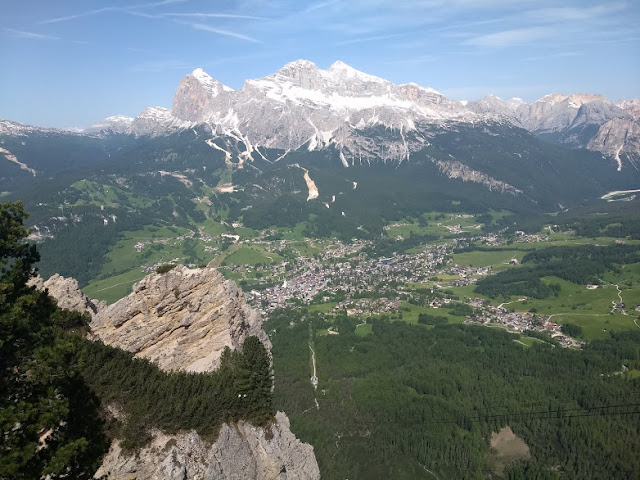 Looking north toward Monte Cristallo.  Incredibly, there is a ski lift that goes up the snow field to the left of the peak. 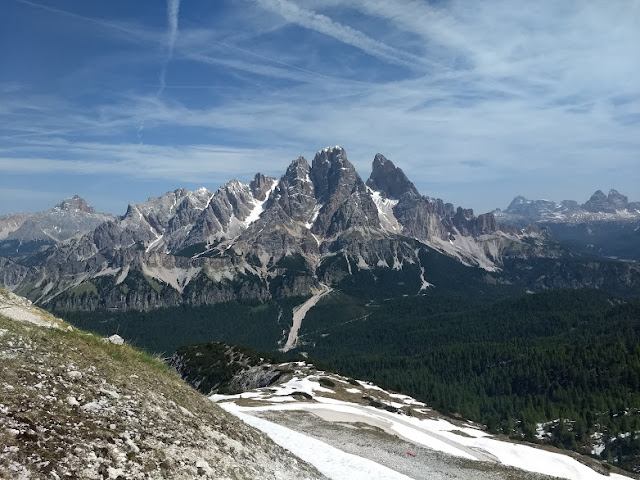 Don't believe me?  Here's the map.  For better or worse, they have strung lifts all over the Dolomites to interconnect towns and resorts.

After lunch in Cortina, we did an afternoon hike to Lago Sorapis.  It's a popular hike.  We left our car about 300 meters up the road from here. 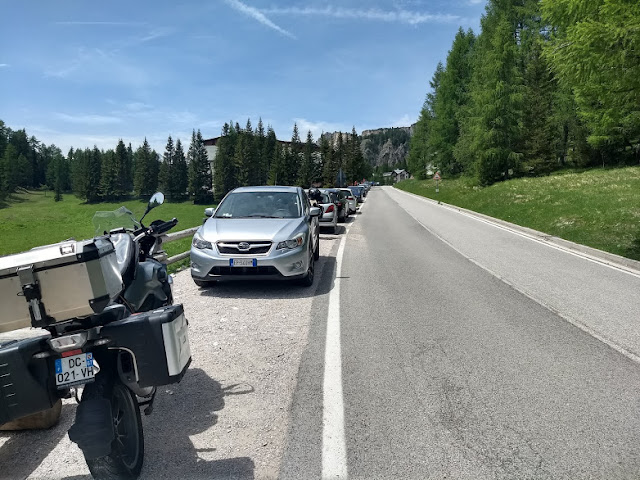 The hike was far more interesting than we anticipated with some fun and games along the way and some great views. 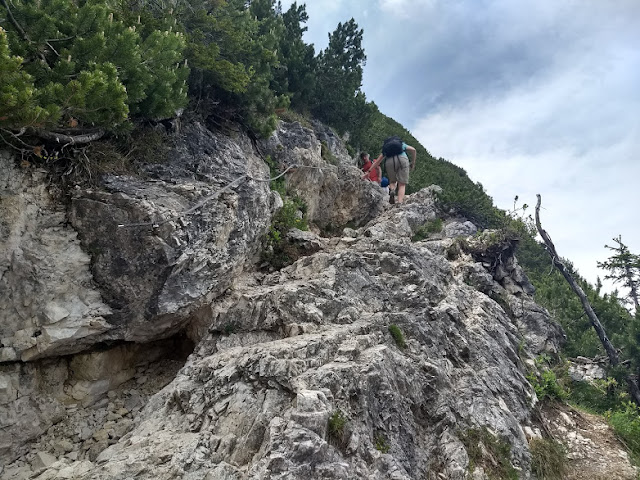 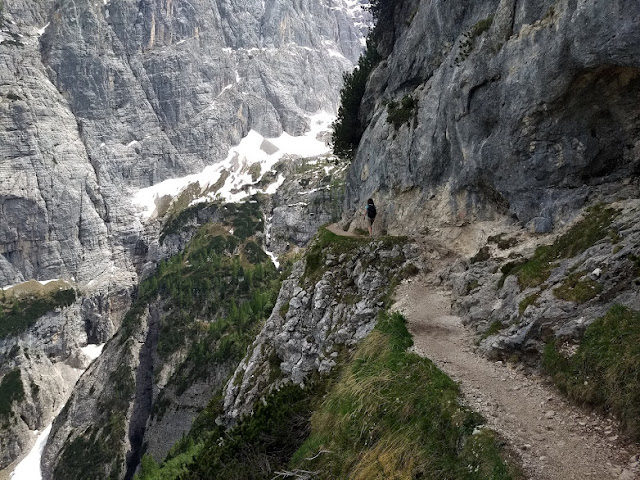 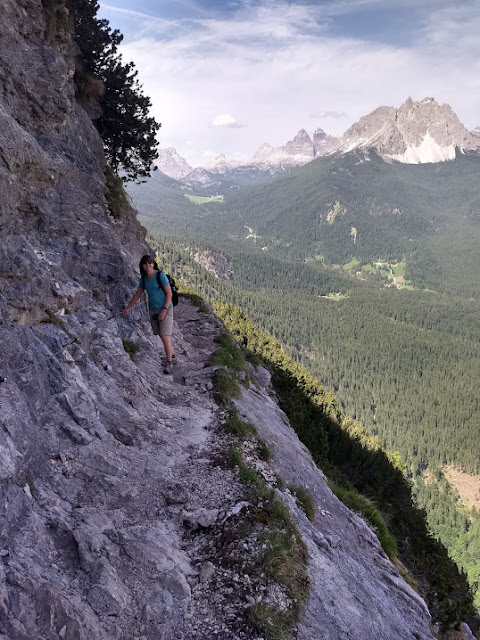 Lago Sorapis is a turquoise colored lake surrounded by towering mountains.  It's a beautiful spot (although it dries up some in the summer), but it was impossible to take a decent photo of it with a cell phone and the panoramas don't do it justice.  I leave you with the photo below and encourage you to go check it out for yourself. 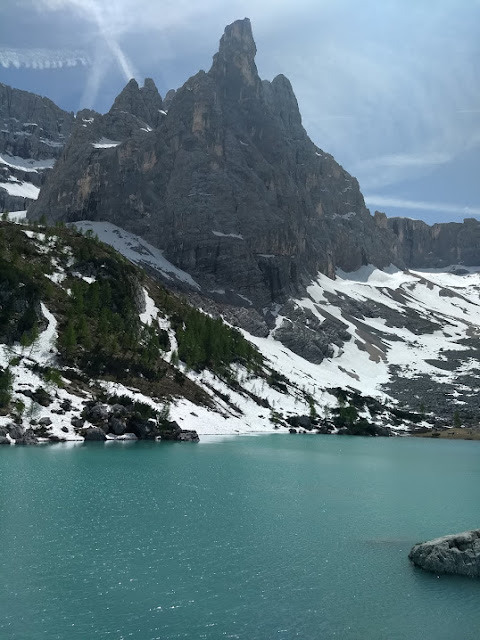 Our third day was one of misadventure.  We had planned to do a high-altitude hike starting from Passo Falzarego, but the forecast was for afternoon thunderstorms and there was quite a bit of cloud cover in the morning.  We decided to start lower with a valley ascent and then go into the high Alpine if the weather improved.

The initial route was industrial, following a ski trail, but eventually led to the Scotoni Hütte. 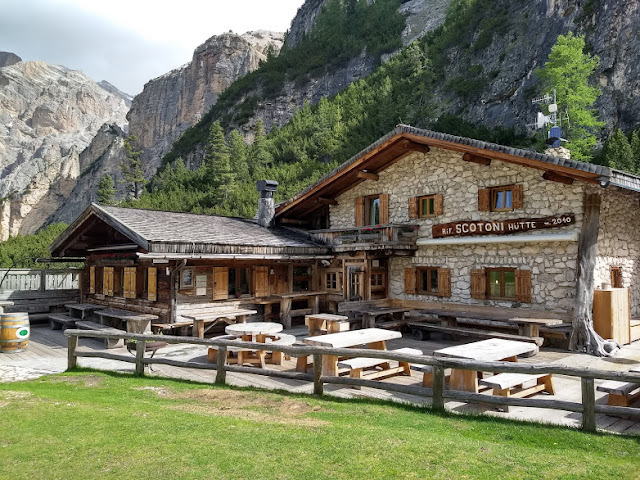 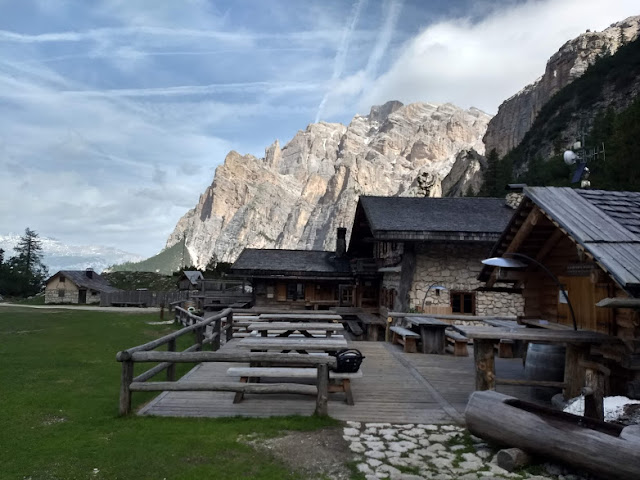 Skies were improving, so we attempted to ascend higher.  The route was a miniature version of Walter's Wiggles in Zion. 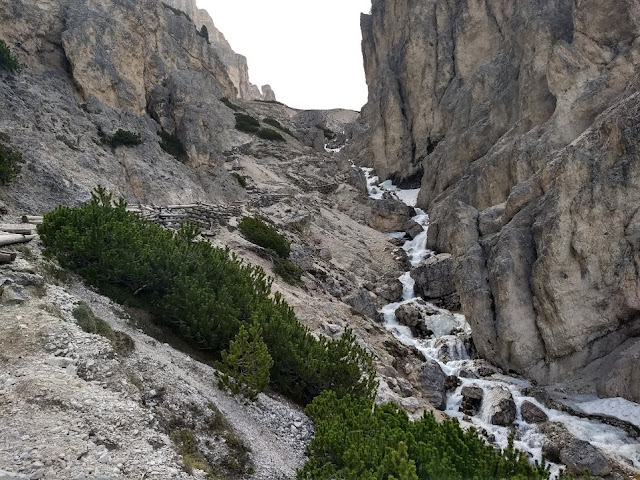 However, after ascending further, we found the trail washed out with a torrent of ice-cold water roaring across it.  We decided to turn around.  Below is the view looking back toward the Scotoni Hutte on the grassy plateau below and then down the valley to our starting point.  There is a ski run here that begins on the top of the Lagazuoi Cable Car about 4 km away.  We couldn't figure out if someone skied down it, how the hell they would get back as there is no lift in the valley or around it.  We assumed bus.  Maybe you just keep skiing to Val Gardena. 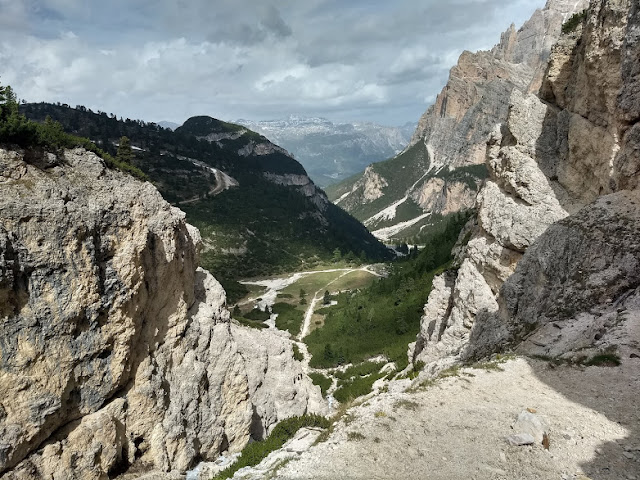 And finally, on our return home to Innsbruck, we stopped at Lago di Braies.  It is a very popular spot, which we confirmed with a Google maps satellite view of the parking lot.  As such, we got up early and got there first thing in the morning.  We were one of the first on the trail and the lake was like glass. 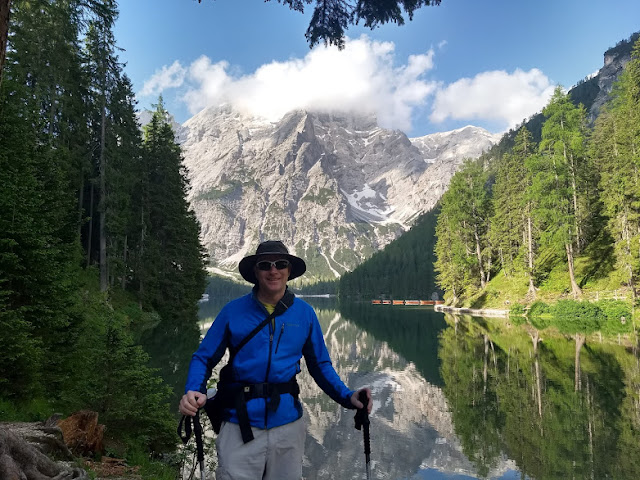 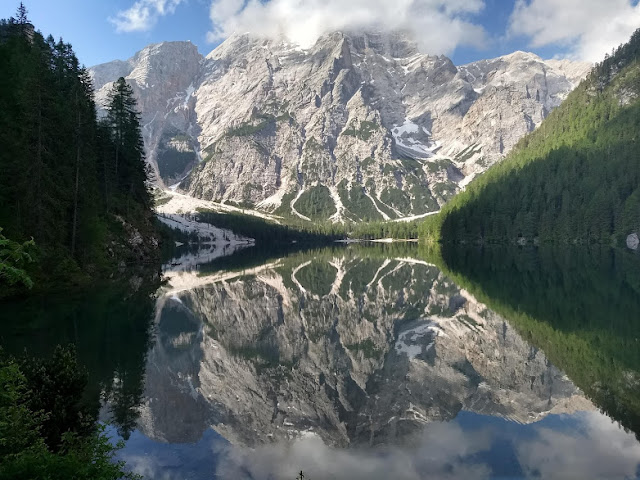 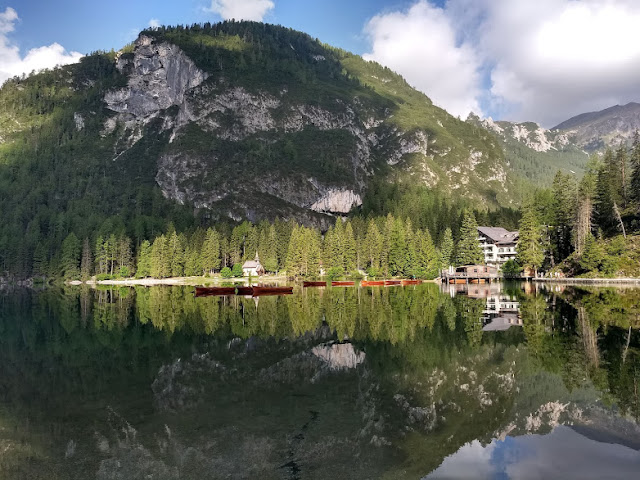 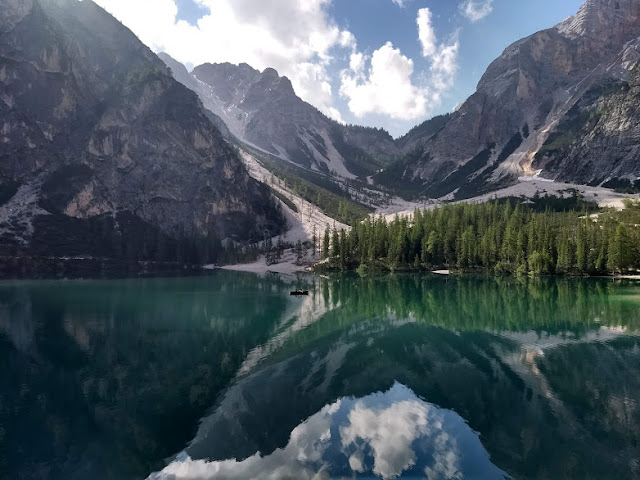 By the time we got back to the trailhead, there were scores of people and long lines for the parking lot.  There are no secrets in the Dolomites, but the early bird still gets the worm.

Since this is supposed to be a meteorological blog, I leave you with the photo below, which provides an unusual perspective on cumulus clouds for contemplation. 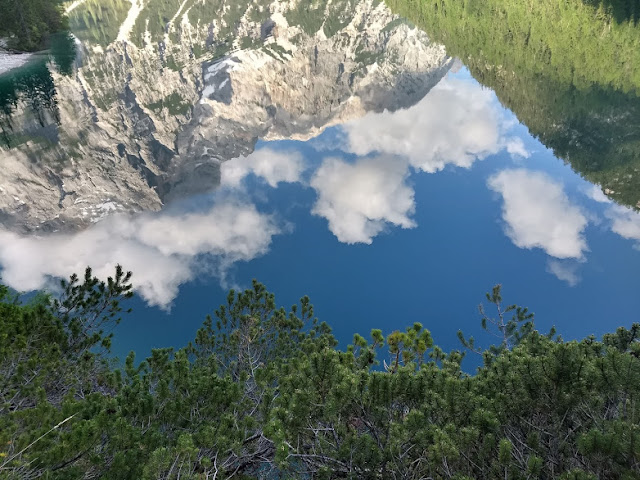