It's not quite like an east-coast snow-eater event when temperature are near 50, fog, and rain, but for Utah, this is as close as it gets.

In addition, dense, mid-level overcast is draped over the mountains, with some west snow at upper elevations, rain at mid elevations, and the transition zone in between.  The Alta webcam below summarizes the dreary conditions quite well. 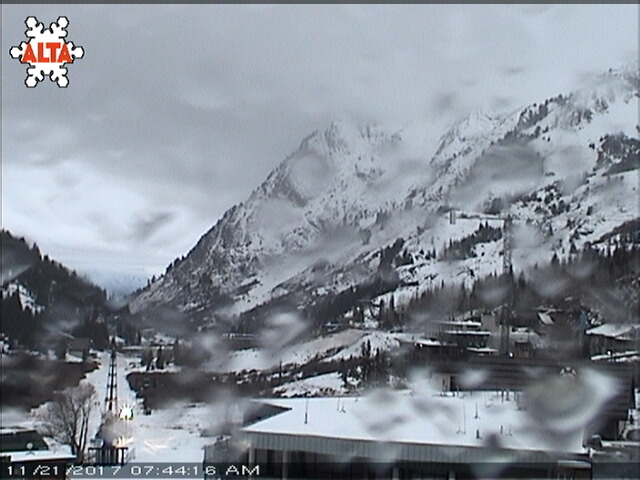 For the most part, snow on north facing aspects will survive just fine this time of year under clear, dry conditions, even when temperatures are above 32ºF.  Without direct sunlight, you simply don't have enough energy to melt snow.

However, if you can add humidity and cloud cover to the mix, things change.  You lose the cooling effect of snow sublimation and gain the energy input of infrared radiation from the clouds.

The eastern U.S. gets these conditions in spades at times, with fog and rain doing it's number on snow frequently during the cool season.

We don't really get such a snow-eating extreme in Utah.  Today is about as close as it gets.  Above 9000 feet, everything will be fine.  Below 8000 feet, we're going to see snow losses.  In between there may be a net loss, but it probably not a huge one.