Getting Real along the Pacific Coast

For the Pacific Coast of the northwest U.S. and southwest Canada, the doldrums of summer are officially over.  Two major cyclones are expected to bring strong winds to the area, along with a litany of other impacts, although the precise locations of the most intense winds with each cyclone remains unclear.

The first windstorm is associated with a midlatitude cyclone expected to develop off the coast of Oregon and Washington tomorrow and track northeastward toward Vancouver Island or the Olympic Peninsula.  The 0600 UTC NAM placed the ~970 mb low center very near the tip of the Olympic Peninsula at 0900 UTC Friday, a near optimal location for strong winds over western Washington.

The GFS solution was not quite as deep and has the low center making landfall along the central coast of Vancouver Island.  In terms of the severity and location of the strongest winds, much will depend on the precise track of the system.

As if that's not enough, a second cyclone follows over the weekend.  Forecasts at present push it further north, limiting wind severity over the Pacific Northwest, but it is a storm worth watching and its history is quite fascinating.

Just a couple of days ago on 10 October 2016, a decaying Typhoon Songda was minding its own business over the western Pacific Ocean just east of Japan (identified by red box below).  That's a good place for Typhoons, well off the coast and away from densely populated southeast Asia and Japan. 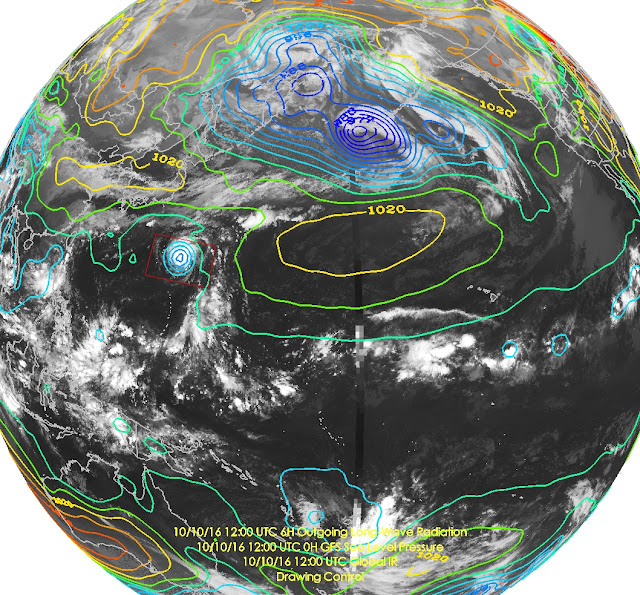 However, as is prone to happen in the fall, Songda meandered slowly northward and, as shown in the loop below, is forecast to be swept up by the midlatitude westerlies.  As it sweeps around the Aleutian low, it is expected to undergo extratropical transition, redevelopment as a extratropical cyclone, before crashing into the Pacific Coast.

Storms of this type can produce powerful windstorms along the Pacific coast.  For example, the infamous 1962 Columbus Day Storm, was produced by the extratropical transition of Typhoon Freda.

I've always wanted to be on the west coast of Vancouver Island or the Olympic Peninsula for a storm series like this.  It is fall break, but I have plans for southern Utah, so I think I'll stick with those.

For more on these storms, see the Cliff Mass Blog.