Juicy Air for Late October, But Will We Get Much Rain?

A major slug of tropical and subtropical moisture reached California late yesterday in advance of a land-falling upper-level trough and began to push inland overnight.  As of 1200 UTC (6 AM MDT) this morning. a narrow band of heavy precipitation was pushing through the Central Valley with a broader band of precipitation extending inland from northern California to southwest Idaho.  Some scattered showers were found over northern Utah, although only a few drops were reaching the ground. 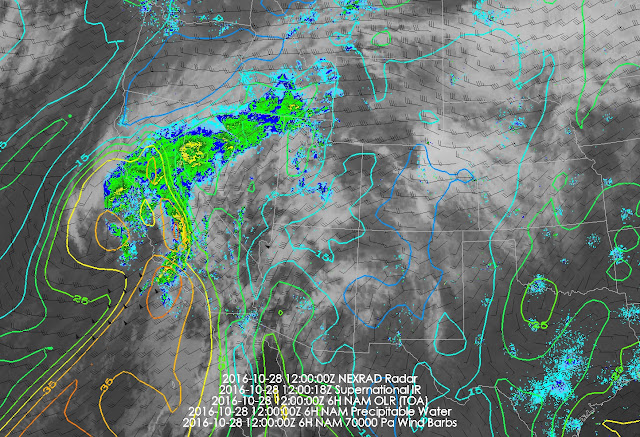 Precipitable water, a measure of the depth of water you would have if you condensed all of the water vapor out of the atmosphere, is very high with this event, reaching 40 mm along the southern California coast.  Although losses to precipitation and other factors favor a decline in precipitable water as airmasses move inland, we're still looking at relatively juicy air over northern Utah by late October standards.  Precipitable water in this morning's sounding at the Salt Lake Airport was 0.76" (19 mm) and the 0600 UTC NAM calls for values that high to remain over the northern portion of the state as a filament of high precipitable water air pushes up the lower Colorado River Basin through this afternoon. 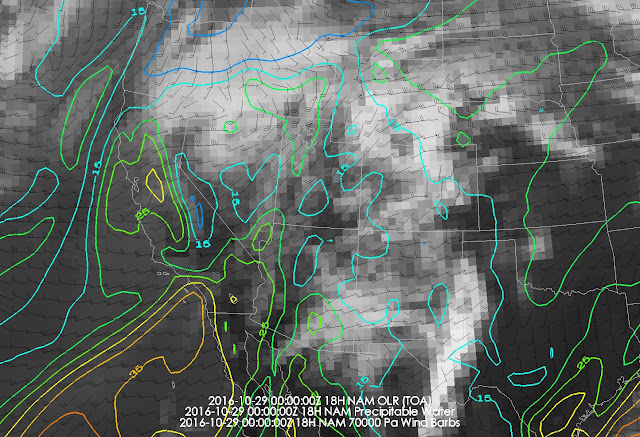 The highest observed in the sounding record for Salt Lake City after mid October is .91 inches (23.1 mm).
Looking through the NAM data, there are two peaks in precipitable water today and this evening, one at 22.8 mm, the other at 20 mm, so we're unusually high for this time of year.

Of course, if you want rain, you need to convert that moisture to precipitation.  To our north, that will happen today as the large-scale forcing favors ascent there and the band will spread inland across southern Idaho.

The challenge we have in the Salt Lake Valley is that although the total water vapor in the atmosphere is very high, that reflects moisture at mid and upper levels rather than near the surface.  As can be seen in this morning's sounding, dewpoint depressions are more than about 10ºC below 700 mb.

As a result, the sky is overcast and grey, but it's hard to anything other than a few drops to the valley floor. 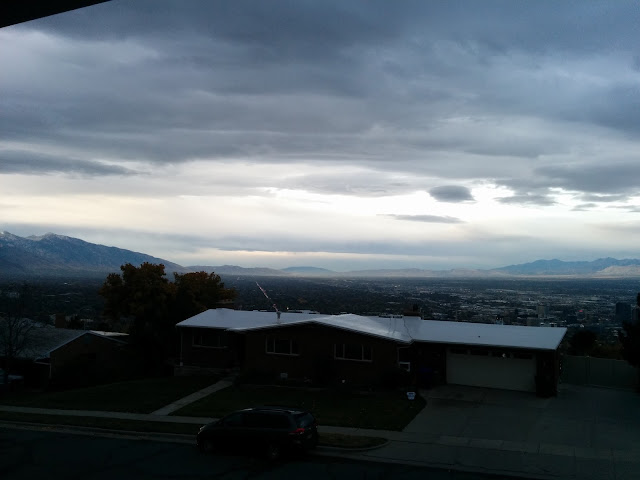 As the upper-level trough swings in, however, we should start to see more showers get going.  Still most members of the NCAR ensemble call for .05 to .15 inches at varying times during the afternoon and evening.  Those are relatively modest amounts.  However, there is one member that goes for 0.3 inches, so there is a slight chance that someone will do better than that.

I'm scheduled to have my roof partially replaced today, so the odds are good for that .3 inches to fall in the avenues just after they strip off the old roof and just before they put on the new moisture barrier...
By Jim S Posted at 10/28/2016 08:34:00 AM