Wow, what insanity.  After a meteorologically boring summer, fall comes in with a bang.  I'll go into rapid-fire mode for this one:

1. Ogden Supercell?: Yesterday afternoon, a long-lived thunderstorm with supercell-like characteristics developed near Dugway Proving Ground and tracked to the Ogden Area over about a 2.5-hour period.  It was a right-moving storm, in that it was moving somewhat to the right of the steering-layer flow and the tracks of other convective cells.  This is common characteristic of supercell thunderstorms, which are long-lived thunderstorms with rotating updrafts (note: there are also left-moving storms, but they are less common).  The Doppler velocity signature of the storm, however, wasn't especially pronounced, so I'll leave it to the severe convective storms experts to ascertain whether or not the storm qualifies for Supercell status.


Colleagues here in our mountain meteorology group installed a sensor on the playa just east of Antelope Island earlier this summer that collects data every minute.  The passage of the storm's gust front was accompanied by a nearly instantaneous drop in temperature of more than 20ºF, wind shift from SSE to W, and a wind gust of 75 mph.

3. Ogden tornado. The storm also spawned a tornado south of Ogden, which was captured in a video posted by Neil Essig on YouTube.


3. Tornado Damage Scale.  I have been asked by a few people how strong the tornado was.  Tornadoes today are classified using the Enhanced Fujita (EF) Scale, which is an updated version of the Fujita Scale originally developed by Ted Fujita, a meteorological pioneer in many areas, including forensic investigations of tornadoes and severe storms.

Other than to say it was probably an EF-2 or lower tornado, I hesitate to speculate on the tornadoes EF rating based on videos and photos, especially given the wide-spread straight-line winds observed in the area.  Careful site surveys are needed to ascertain the characteristics of the damage path, the degree of damage, and to separate damage from the tornado and the straight-line winds.

5. Try to avoid saying it was "only" and EF-0, EF-1, or EF-2 tornado.  I used to tell people that I really wanted to see a tornado, and then I saw the August 11, 1999 tornado move through the Avenues.  I was completely naive about the damage that a "small" tornado could do.  Like a surgical knife, it cut through the neighborhood, doing considerable damage along a path one or two houses wide, with nearby homes mostly unscathed.  For those impacted, "only" and EF-0, EF-1, or EF-2 makes little sense.  Their homes and lives have been upended.

6. Overnight snow.   Yup, the white stuff has arrived in the upper elevations of the Wasatch Range.

The Alta-Collins automated sensor shows a total snow depth of 7", but don't get too excited about that as it was at 4" when there was no snow on the ground prior to the storm.   You can see this in the 5-day time series below.  Accumulations so far at that elevation (9700 feet) probably are around 3 inches.  Not quite enough to break out the new skis...

7. Future snow.  The circulation center for the system is currently moving over us and precipitation is occurring mainly to the north and west of the Salt Lake Valley. 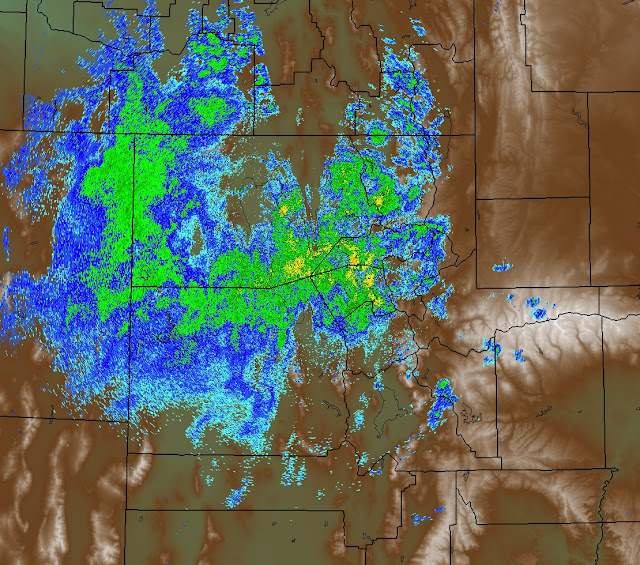 If you feel disappointed, don't despair, we will see more snow today and tonight.  I'm going to go for another 5-10 inches through 6 am tomorrow morning at Alta-Collins.  There's a chance for more, and indeed there were 2 members of last night's NCAR ensemble that pumped out more than 1.5" of water today and tonight for that area (which would probably give us something like 12-18" given the high densities we are dealing with), but 5-10" is the most likely range.
By Jim S Posted at 9/23/2016 09:52:00 AM