A quick look at the radar loop this morning shows that the Salt Lake Valley will be seeing steady precipitation for most of the morning.

A closer look reveals that the broader-scale precipitation shield is moving southward as the echoes move from the northeast.  This is a classic "wrap around" situation in which we receive precipitation being generated in the northeasterly flow behind the upper level low.  Those cells are being generated well above crest level as the flow at mountaintop level shifted to southwesterly overnight. 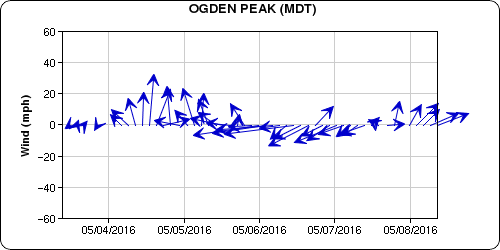 Of one goes up a bit higher, however, to 500 mb (about 18,000 feet above sea level), one finds the magic northeasterlies and the layer where those cells are being generated.

One might wonder why with northeasterly flow we're not seeing downsloping and drying on the west side of the Wasatch Range.  The answer is wind shear.  The upper-level flow is northeasterly, but as can be seen in the Ogden Peak time series, the flow at crest level has a westerly component.  Surface observations in the valleys show generally light, disorganized flow.  Thus, there really is no downslope and we're seeing efficient spillover of precipitation across the Wasatch Range.

The rain will help keep the foothills green going and the sprinklers off for a while longer and is certainly appreciated.
By Jim S Posted at 5/08/2016 09:15:00 AM