On Monday night, strong winds and waves on Bear Lake capsized a small boat killing one adult and three children.  It sounds like a terrible tragedy and my thoughts and prayers go out to the friends, family, and all involved.

Bear Lake straddles the Idaho/Utah border and is roughly 30 km long and 10 km wide.  The accident apparently happened in the Idaho portion of the lake. 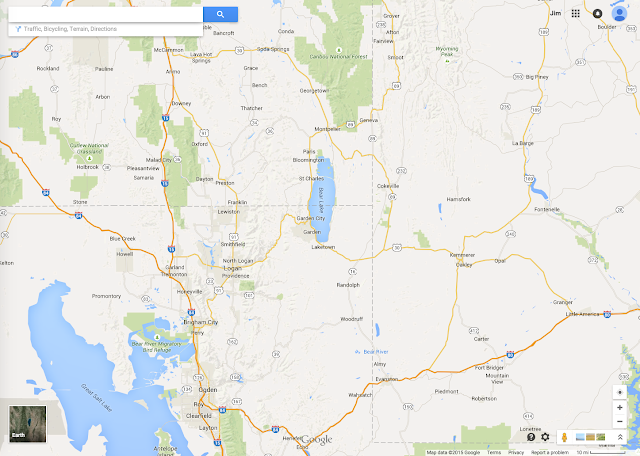 Although details are still fuzzy, the Salt Lake Tribune reports that winds gusted to 76 mph, with waves reaching 10 feet in height.  Seven people were on board when the boat capsized, all with life jackets on.  The water temperature, however, was only 53º.  It is likely that the victims died from exposure or downing before they could reach the lake shore.

I've taken a quick look at the weather contributing to this tragedy and it provides a cautionary tale about just how quickly disaster can strike on Utah waters (and elsewhere) seemingly from nowhere.

In addition, satellite and radar imagery shows that Bear Lake was on the edge of most of the thunderstorm activity (the lake is just west of the UT-ID-WY triple point), which was associated with a weak cold front that was moving through the area.

Although there were some weak radar returns in the vicinity of Bear Lake, the strength and duration of the strong winds strongly suggests that a mesoscale outflow boundary (a.k.a. gust front) produced by precipitation and thunderstorms to the north and west likely propagated through the area.
Indeed, numerous sites in the area reported strong winds during this period, including the Grace RAWS station just northeast of Bear Lake, which hit 65 mph.  There probably were some clouds and showers in the vicinity of Bear Lake ahead of the gust front, but the change in wind, temperature, and waves experienced by the boaters would have been abrupt and severe.  Further, the persistence of strong winds and waves combined with a further drop in temperature following the gust front passage greatly increased the likelihood of drowning or hypothermia before the boaters could reach shore.   I suspect the boaters were hit by something that they never saw coming, or had little time to respond to, and were cast into a nightmare situation.

This sort of weather situations is, however, not all that uncommon in Utah, highlighting the need for boaters to remain vigilant for rapidly changing conditions when storms are around.  It's especially important to recognize that the strong winds and rapid temperature changes associated with outflow boundaries can sometimes propagate well away from the generating storms, in some cases into areas experiencing clear skies.
By Jim S Posted at 6/03/2015 09:44:00 AM