The OWLeS Field Program: Adventures on the Tug Hill Plateau

Today marks the first day of our field activities for the Ontario Winter Lake-effect Systems (OWLeS) field program.  Two of my graduate students, Leah Campbell and Peter Veals, arrived in Syracuse, NY last night and will be installing equipment over the next several days. 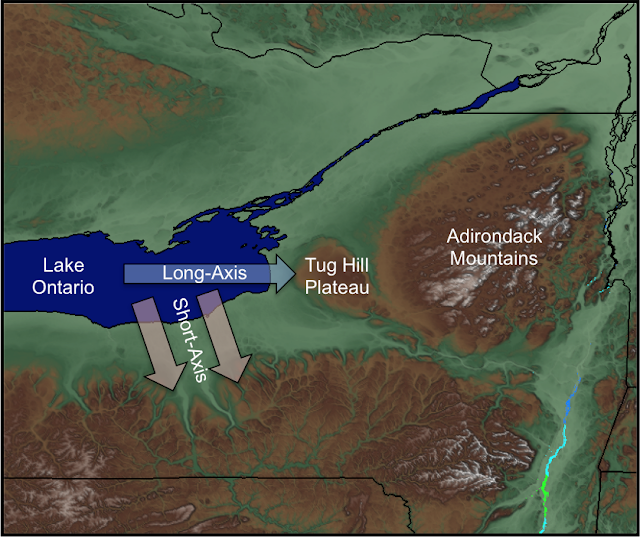 My group is primarily interested in the enhancement of snowfall over the Tug Hill Plateau, which gradually rises as much as 1700 ft (500 m) above Lake Ontario.  The summits of a few peaks in Vermont, New Hampshire, and Maine may get more snow, but the Tug Hill Plateau probably provides the largest contiguous area averaging 200 inches of snow or more in the northeastern United States.  Observations from the area are fairly sparse, but volunteer National Weather Service spotters provided fairly detailed data during the winters of 2003/04–2005/06.  During this period, an annual average of more than 200 inches fell from Osceola on the south side of the Tug Hill Plateau (236 inches) to Barnes Corners on the north side (209 inches).  North Redfield, widely regarded as the snowiest regular measuring location on the plateau, averaged 254", nearly double that observed in Sandy Creek just to the west (138 inches).  There are no regular observations taken over the highest portion of the plateau. 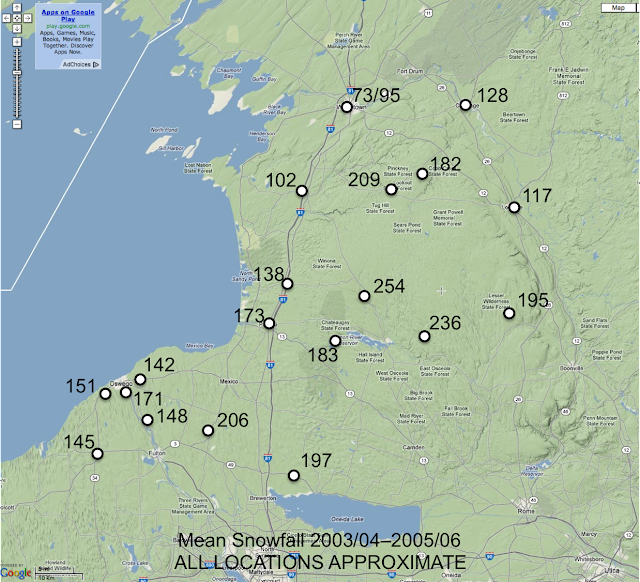 Snowfall on the Tug Hill Plateau supports an important winter-sports economy and the area is well known for snowmobiling and cross-country skiing (slopes steep enough for alpine skiing are limited, but Snow Ridge ski area operates with a 450 foot drop on the eastern escarpment).  Paul Fancia operates NorthernChateau.com, which provides access to weather data and several snow cams in the area, and sent me the video below showing a healthy snowpack on the tug.


The map below summarizes some of the equipment that we will have in the field.  MicroRainRadars (MRR) operated by SUNY Albany and the University of Utah will continuously collect vertical profiles through clouds and storms from this week through the end of February at coastal, lowland, upland, and high plateau sites.  During the field phase (5 December 2013–29 January 2014) we will also continuously operate snow study stations (precipitation and snow data) at the lowland and upland.  During Intensive Observing Periods (IOPs) examining long-axis lake-effect systems and enhancement over the Tug Hill Plateau additional instrumentation will be deployed including the Millersville University Profiling System (upper-air soundings) and the University of Alabama Huntsville Mobile Integrated Profiling System (profiles of wind and cloud structure), both of which are mobile but will operate at times near the lowland site.  Our University of Utah team will also collect upper-air soundings at the upland site. 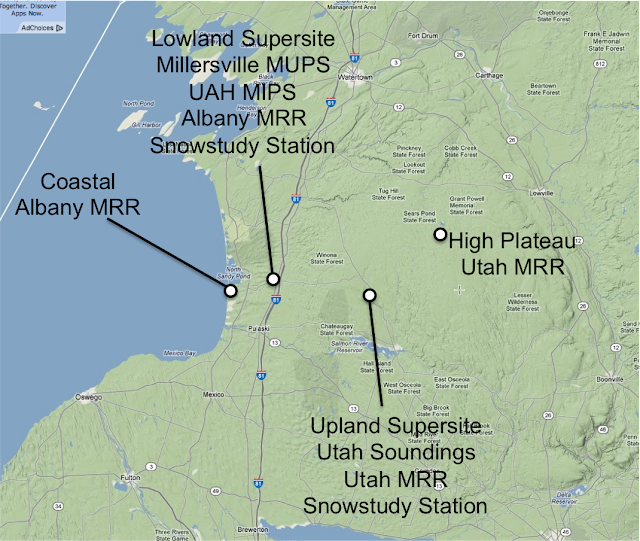 Finally three Center for Severe Weather Research Doppler on Wheels (DOW) radars will peering into the storms and the University of Wyoming King Air Research Aircraft will collect radar and cloud particle information in the sky.

The observations collected by all of these instruments will allow us to examine how and why the characteristics of storms change from Lake Ontario to over the Tug Hill Plateau.  They will also allow us to improve computer simulations of lake-effect precipitation, leading to better forecasts.

A number of local residents have helped to make all of this possible.  We look forward to working with them and leaning about Tug Hill snow this winter.
By Jim S Posted at 10/16/2013 09:04:00 AM